Scientists have historically been poor at communicating science to the general public. This is especially true of climate change. The necessary data and facts are there, but data and facts are not what matters to people. Humans have always engaged with each other through stories, not data, not facts. Stories matter. They can inspire and motivate, and inspiration and motivation are prerequisites to learning. Storytelling, even when non-factual, can be a compelling catalyst for discussion.

I’ll be the first to admit that writing a novel about climate change is a deeply unscientific venture. But it is engaging. Just imagine worst-case scenarios or best-case scenarios and what life would be like. How would we respond? Our scientific data and predictions may be incomplete, but the imagination has no boundaries.

Humans have always engaged with each other through stories — not data, not facts. Stories matter.

Our imaginations and the stories we share can be powerful tools for teaching, learning and positive change. What if climate chaos were to grip us, not in a subtle way, but in an acute and terrifying way? What if it stopped raining tomorrow in California, and didn’t rain again for a century? How would we respond? How would we want to respond? Can humanity shine in the face of climate chaos or would we destroy ourselves? Can we imagine a better future and can that motivate our actions today?

The stories and ideas we share will help us navigate uncertain times. Fiction writing helps me think more clearly about the facts and data associated with climate and the environment. While the world changes, I’ll continue to wake up every day and do the best work I can. Great teaching motivates students. I’ll use all the tools available to me, both scientific and fictional, to inspire and engage young people. It isn’t too late. There’s work to be done. There are stories to share so we can imagine the best outcomes for our uncertain future. 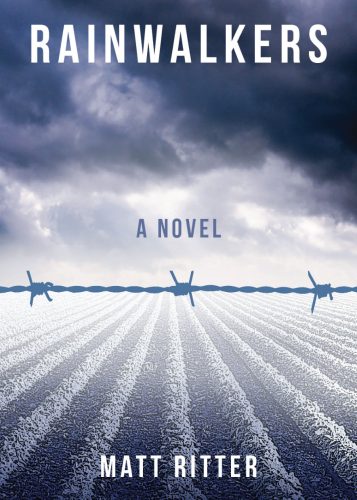 While Will and Zach slept on the floor of the old man’s trailer, clouds shuddered in the darkness on the Santa Lucias at the western edge of the Valley. It was from that purple and brooding wall that rain came each night. Up on the steep ridgeline, a forest of firs basked in moonlight above a gossamer of gloom, and silence prevailed, no bird song, no hum of insects, nor hooves sneaking across soft leaves. All gone.

Marine fog rolled down the east-facing slopes and mixed in the air with microscopic debris and man-made bacteria. Each night, the Valley basin filled with clouds that rung out like an old sponge. Artificial bacteria designed by forgotten scientists in their experiments gone wrong nucleated ice around every particle of Valley dust that fell from the sky in each rain. During their descent, the bacteria filled each raindrop with a foul-smelling airborne chemical deadly to humans, but neutralized in the soil within seconds.

Before sun up, water flowed off the thin flinty soils and scented shrubs of the hillsides to the riches of black mud and shapeless clumps of plowed earth on the Valley floor. The drinking water that squeezed through the deep soils into the Salinas River was once again pure. The rain affected neither the plants nor the soil fungi, so the diverse Valley crops prospered despite, and because of, each night’s toxic bathing. If such were not the case, Valley residents would have starved within weeks of the first deadly rains that ended the hundred years of drought. Instead, each morning the Valley soil took on deadly water at all sides and purified it as it ran toward the enduring river at its center.

Along the entire Valley border, out past the rolling low hills of the eastern Gabilans, a high wall ran through the dust, sagebrush, and dry grass. It was a wall without end, circling the Valley, neither beginning nor ending at any location, and broken only at the guarded border crossings. Lonely young men in poorly built lookout towers were perched along the wall, watching the sun rise and feeling the dry rattling desert breath howl in from the east. Beyond their sight, far past the golden horizon, stretched a dryness so complete that life could no longer be sustained in any of it. Dead stands of brittle creosote and the broken stems of burrobush stretched across vast expanses on the surface of what was once the western North American continent.

What was beyond the uncrossable deserts, no living Valley person knew. Two generations had passed since the Regional Breakup and little accurate history was retained. With no means of long distance travel, no contact nor even memory of contact remained with others on the eastern edge of the continent. Life in the Valley was insular, and information was sparse. Rumors circulated the Valley, most of which were false, either accidentally or purposely designed for fearmongering about the never-ending conflict with the Valley’s only known neighbors, the San Benicians.

The Salinas River was swollen and churning from the night’s rain when Will and Zach descended the old man’s steps. Will looked at the hazy wall of clouds in the distance. The sun was rising over the low-rolling Gabilans, and illuminating the Santa Lucias to the west.

This Valley was Will’s home. He’d always loved it, served it, and was nearly killed twice while defending it. Although he’d never been far from the confines of its borders, he figured it was the most beautiful place in all the known world. Except for bordering San Benician territory, which he’d been in only once and was lucky to have escaped alive, he’d only heard stories of other places in the world. Paris, New York, Europe, Asia, they may as well have been on other planets.

Even though true seasons no longer existed in the Valley, this day would have fallen in early spring, and the morning was already warming. On the foothills to the east, rows of abandoned orchards with their twisted and unpruned ancient limbs bloomed beautifully in the morning dew, each releasing a melancholy sweetness that beckoned like a forgotten lover for bees that would never return.