Alumnus and educator Ashanti Branch knows there’s a direct link between emotional intelligence and academic achievement. He’s working to impact both through his organization focused on at-risk boys in middle and high school.

Ashanti Branch (Civil Engineering ‘98) says that when he was in middle school, a teacher attentive to his emotional needs saved his life.

Branch grew up poor in Oakland, the oldest son of a single mother and the de-facto father figure to his younger siblings after his father’s death. It was a difficult childhood, but he didn’t confront his feelings about it until Mrs. BP noticed that he was struggling in her English class.

“She didn’t get mad that I didn’t like her class. She sat me down and said, ‘I know you’re sad your dad died before you were born, but life doesn’t give us what we want, it gives us what we get. We have to make the most out of it,’” Branch said. “I never felt I had that permission before – I was supposed to take care of the family. I needed a place to talk about what I was going through.”

It was an eye-opening moment, and now, decades later, Branch has created what he needed as a kid: a supportive space for boys and young men in middle and high school.

Branch is the founder and executive director of the Ever Forward Club, a non-profit working with students and teachers nationwide, and the #MillionMaskMovement, a global campaign aimed at helping people understand themselves. The group offers trainings for educators, team building workshops and outreach to families of at-risk students. The goal is to help these boys overcome the emotional challenges keeping them from reaching their potential.

For his work with the group, Branch has been profiled on PBS and NPR, delivered TED Talks on the group’s approach, and been featured in a documentary film called The Mask You Live In.

Branch’s entire path to this work has been an unexpected journey. After studying civil engineering at Cal Poly, he spent four years working as a project manager at construction firms.

But he realized that the most passion he felt for his job was when he began tutoring first-generation students at an Upward Bound program in Oakland after returning to his old high school to talk about his work. He decided to change careers, becoming a high school math teacher in the Bay Area.

As a teacher, Branch noticed that many of the boys in his class were underachieving academically, and he knew they could do better. It made him feel like a failure: he loved teaching, but couldn’t figure out why he couldn’t connect with these boys.

“Most of them were failing, even though I knew they were smarter than I was at their age,” he said. “What I saw in them was that they just didn’t believe in themselves, but also, it was a community where smart’s not cool, and these kids wanted to be cool more than anything.” 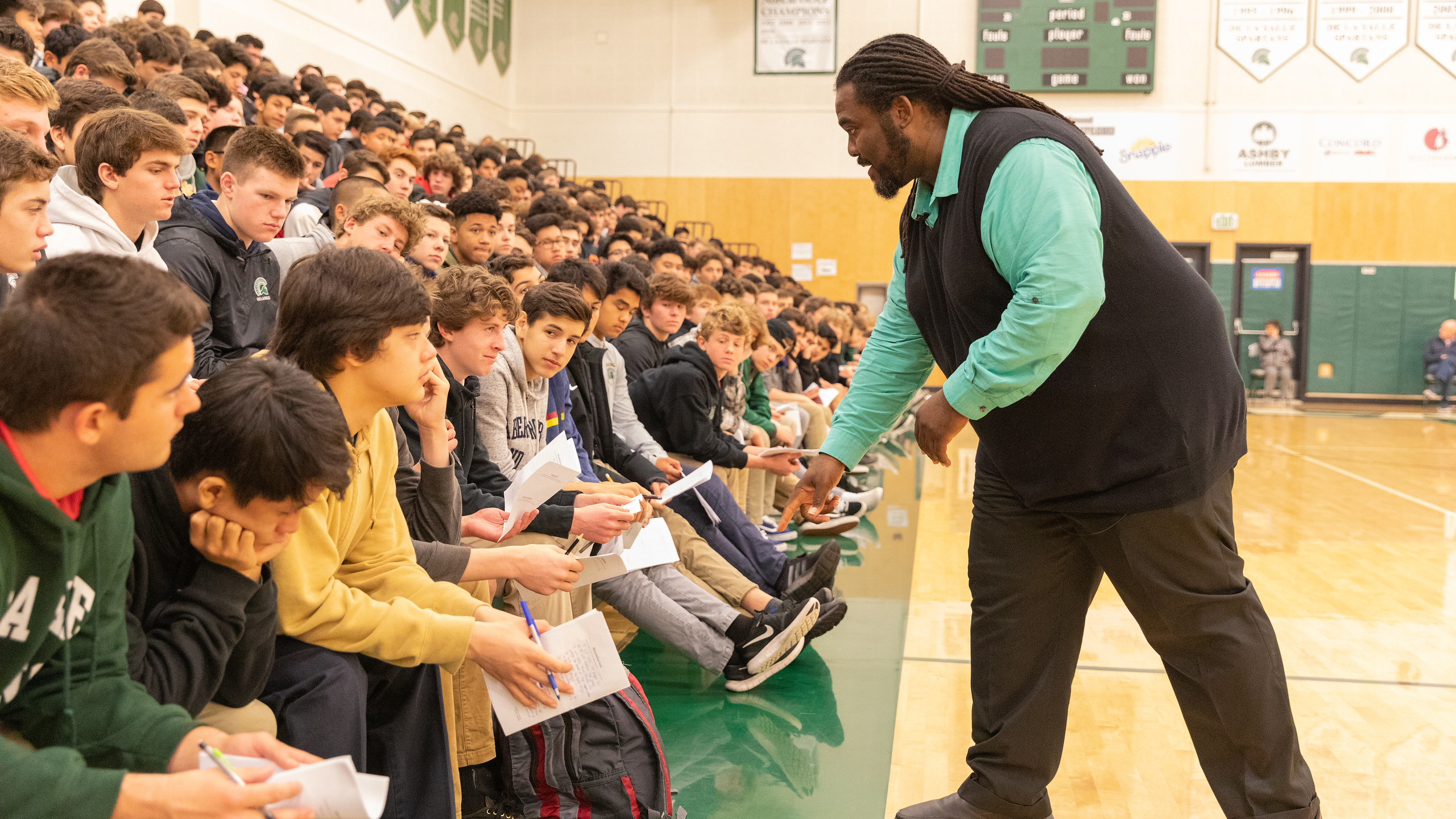 He invited some of the students to have lunch with him and see if he could get them to teach him what he was doing wrong in the classroom. Those lunch sessions turned into a regular meetup, and the Ever Forward Club was born — just a teacher buying food for a handful of young men in his class, talking about what they were going through in their lives.

“It wasn’t to get anybody to college,” he said. “It was more like, ‘Hey, you don’t seem like you like school very much. How about you come join our club and we’re going to just try to make school fun?’ It was just about trying to get them to take an interest and give their best effort.”

Branch ran the club at his school for four years when a family friend, wanting to make a donation to support his expenses, asked for data on how the program helped the students.

“She asked me, ‘Tell me some of the success you’ve had,’” Branch recalls. “I said, ‘Well, the kids show up and they eat all the food. That seems like a success.’”

As they talked it through, however, Branch began to realize that every student who had gone through the club had not only graduated high school, but was now taking some productive next step — in a two- or four-year college, at a trade school, or in the military.

Without meaning to, in a place where smart wasn’t cool, Branch had created a support program that saw 100% of its students achieve academic success.

The would-be donor encouraged Branch to set the club up as a nonprofit organization.

“I wasn’t trying to create a nonprofit,” he said. “The work began to grow because it was called to grow. I didn’t know what I was doing — in some areas I still don’t, but every day is a learning opportunity.”

The Ever Forward Club has continued to grow, first across the Bay Area and eventually hosting chapters and events nationwide. Branch gave up his job as a teacher and now leads a team of six employees. The group still boasts a 100% high school graduation rate, and more than 90% of students in the program attend college, military training or trade school after graduation.

The COVID-19 pandemic has had a major impact on Ever Forward, bringing both limitations and new opportunities. As shelter-in-place orders wiped out their slate of scheduled workshops and trainings — and with them, much of their revenue stream — Branch and his small team had to quickly learn how to transition their events online and find new ways to reach out to students with unprecedented needs.

“This year, we’re going to be piloting some elementary school work,” Branch said. “There’s going be a huge need of elementary schools that need more support, especially with distance learning and students not being connected to school in a really deep way.”

But through it all, Branch’s Learn by Doing education has served him well as he has transitioned from engineer to teacher to nonprofit leader.

“I basically have been learning on the job my whole career,” he said. “What I learned at Cal Poly is that you try stuff, you prototype it, and if it doesn’t work, you pivot, you revise it, and you try it again.”

Learn more about Branch’s work and the Ever Forward Club’s signature #100KMasksChallenge at everforwardclub.org.