Since its opening in 1971, the Julian A. McPhee University Union has served as a common gathering space for thousands of Cal Poly students. It’s a place to grab a coffee, study with friends, make pottery in the ASI Craft Center, or show off bowling skills — not to mention take advantage of the other abundant student resources in the building.

But how did the UU come into being?

As early as 1948, students established a fund for a Student Union for the rapidly growing college. For decades, students had relied on gathering spaces in administration basements, old cafeterias and dormitories, and campus gyms.

Students envisioned a “campus living room” managed by the student body where they could invite friends and family to gather and hold social events. 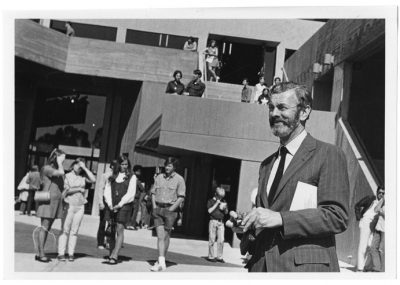 It was a lengthy process, but after raising student body fees, significant fundraising, and securing a federal loan, the students and administration selected San Francisco architect Joseph Esherick to design the space.

The location for the building would be a bridge between the new dormitories on the east side of campus, the new Administration Building to the north, and the academic center of campus to the west. Esherick designed a building that was permeable, with informal and casual ways to enter and pass through the building, as well as the UU Plaza where students could gather together outdoors.

The building was dedicated on March 6, 1971, and named for Cal Poly President Julian A. McPhee (1896-1967), who had been an advocate for the UU. The building opened with a bowling alley, pool tables, craft center, burger bar, photography lab and ASI offices on the first floor. 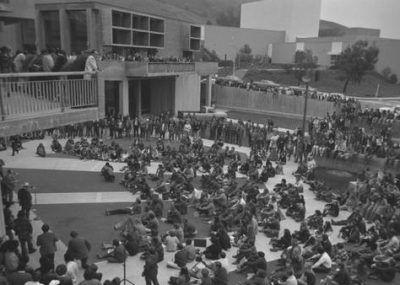 Students gather in the University Union in 1971. Courtesy of University Archives, Special Collections.

The second floor featured student study lounges, meeting rooms and the multi-purpose Chumash Auditorium. The Brutalist design and bright orange color scheme was met with mixed responses from students. Regardless, the UU immediately became the new center of campus — only two days after its dedication, students and President Kennedy met in the plaza for a campuswide discussion to address student concerns.

For the last 50 years, the ASI-managed spaces have aimed to serve the evolving needs of the student body, with the Multicultural Center, the Rose Float offices, the university bookstore, and coffeeshops and restaurants at various times comprising the other Union amenities.

From anti-war protests and social justice demonstrations to music events and pep rallies, the University Union Plaza has been used by Cal Poly students as a gathering space and a place to make their voices heard.

Over the years, hundreds of posters have been draped from the balconies; notable people, including civil rights activist Cesar Chavez and actor Laverne Cox, have come to speak; and music from the University Jazz Band and poetry from the Multicultural Center’s Another Type of Groove have filled the UU, fulfilling the original vision of a true campus living room.

What memories do you have of your time at Cal Poly? Email us at [email protected] to share.