This summer, four Cal Poly alumni participated in the Olympics — strutting their stuff on the field, the track and behind the scenes.

For some, like U.S. cycling standout Christopher Blevins, Tokyo was a dream years in the making. For others, like Israel baseball player Joey Wagman, the Olympics was an opportunity that wasn’t expected, but was too good to pass up.

Here are four stories of Mustang Olympians who showed perseverance and hope in the culmination of years of hard work.

For Hyland (Graphic Communication ’18), it’s always been a life goal to get to the Olympics. She was a standout pitcher at Cal Poly who’s played for Mexico’s national softball team for the past three years. Her grandfather, who was born in Mexico, and her mother encouraged her to try out for the team. In 2019, she pitched a game against Puerto Rico that helped the team move toward a berth in the Olympics — secured when they beat the Canadian team.

“A lot of people thought Puerto Rico was going, they thought Canada was going to outplay us, but we swept the tournament,” she said. “I think that really shocked a lot of people and that was one of the best feelings, because people didn’t think we were going to be able to do it.”
But knowing that they were going didn’t feel real to Hyland until she landed in Japan with her team.

“I was able to live out a lifelong dream and represent my family on the world’s biggest stage for sports,” she said. “Knowing that I was in a community filled with the world greatest athletes had me in awe.”

The most memorable moment for Hyland was the first game the team won.

“We had a rough start at first, but securing the first win in Olympics history for Team Mexico was one that I’ll never forget,” she said.

Looking toward the future, Hyland, who spent two years on the Cal Poly softball coaching staff first as a volunteer and then the pitching coach, said she’s hoping to further her professional career as a player and potentially coach again one day.

“I just want to get as much experience under my belt as I can,” she said. “We have such great players on staff here (on Team Mexico) and I’m learning so much from them.”

Softball is not scheduled for the 2024 Olympics, but Hyland said she’ll be waiting patiently for what’s in store for 2028. 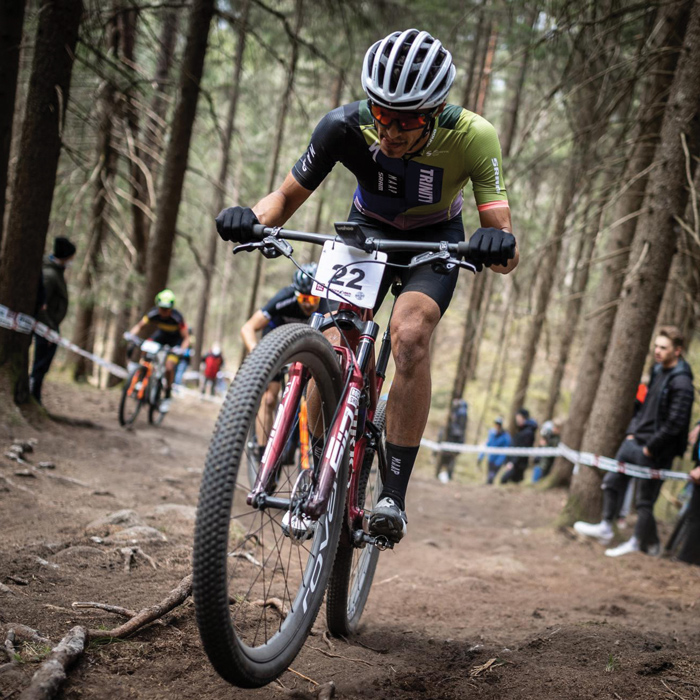 When the Blevins (Business Administration ’21) moved into the Cerro Vista residence hall in the fall of his freshman year, he attached a sticky note to his wall with one word on it: Tokyo. Five years later, he realized that dream: competing for the United States in the men’s cross-country mountain bike race.

“The Olympics were amazing, and also a bit strange in certain ways. COVID had an obvious imprint on the Games,” Blevins said. “It’s the proudest I’ve been of the hard work and process I put in.”

Though fans and family weren’t allowed to attend for safety reasons, “The messages and support from people back home made it so special.”

The Olympics weren’t the only event Blevins competed in this summer. Just a month after his Olympic race, Blevins competed in the 2021 UCI Mountain Bike World Championships, where he earned his first World Champion title, winning the first-ever elite men’s short track cross-country event. He then became the first American man in 27 years to win a UCI World Cup mountain biking event.

Blevins said he’s looking forward to winning a medal at the 2024 Olympics, but in the short term he plans to move back to SLO, start a business with friends and enjoy some downtime. And one day, he hopes to connect his career as a cyclist to grassroots, community-oriented efforts to get people on bikes.

Blevins, who graduated in March 2021, credits his Cal Poly courses with helping him become a better cyclist, and vice versa.

“The classes I took at Cal Poly that were getting me ready for the real world and working with groups has absolutely helped me be a better athlete and teammate, and the sport of cycling has taught me so much that parallels my education,” he said. “The two are mutually beneficial to each other and that’s been complementing my whole racing career.” 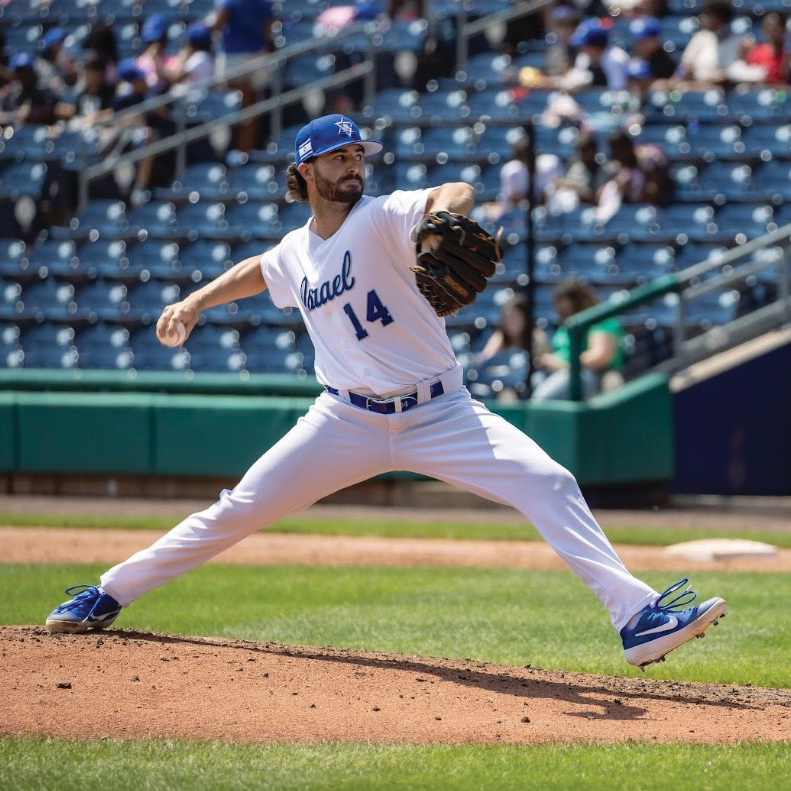 When Wagman (Business Administration ’13) first played for Team Israel in the 2017 World Baseball Classic, the Olympics was the furthest thing from his mind. As a baseball player, it’s always been Wagman’s ultimate goal to make it to the major leagues.

But then the team’s general manager approached him and several other players about getting Israeli citizenship, which would qualify them to play for Team Israel in the Olympics. Wagman was the first to say yes.

“It was incredible to be in that environment,” Wagman said. “It was something that I’ve never experienced before and I don’t know if I’ll experience that again. It really was extremely unique and something I’m very thankful for.”

The most memorable piece of the Olympic experience was the baseball, Wagman said. Though the team ultimately didn’t come away with a medal, he’s proud of the way they played.
“We fought through a lot of adversity to be there,” Wagman said. “I’m incredibly proud of what we did and what we accomplished.”

Wagman, who’s been a professional minor league baseball player since he graduated in 2013, saw his career put on hold during the COVID-19 pandemic. But after coming home from the Olympics, he’s secured a spot with the Sioux Falls Canaries. He credits his time at Cal Poly with instilling his work ethic and his drive to keep going.

“I learned how to work and how to be a professional,” he said. “When I went into professional baseball, I knew how to stick to a routine and I got all of that from Cal Poly.” 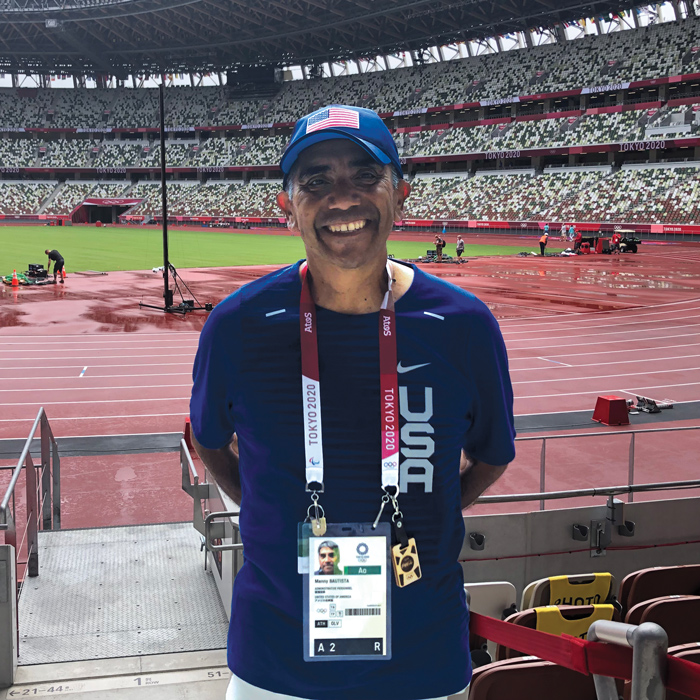 Bautista’s (Physical Education ’82) road to the Olympics began in the third grade, when he ran home from school and told his mom he wanted to be a coach.

His dream propelled him forward into an athletic career that blossomed at Cal Poly, where he was an All-American in both track and cross-country before graduating in 1982. He then went on to coach track and field at Kansas State University and Mesa College in San Diego.

Bautista’s first trip to the Olympics was in 2008, as an assistant manager for the U.S. Track and Field team. He worked the same role again this past summer at the Tokyo games.

Though COVID-19 restrictions meant many things were different, Bautista said it was still a great experience.

“In Tokyo, everything I saw of the city was from the window of a bus, but the Japanese people were great. Everyone was,” Bautista said. He added that being in the Olympic Village, around athletes from different places and sports, was a highlight.

“It’s a vibe that you can’t quite describe,” he said.

Bautista recently retired from coaching and is looking forward to playing golf and helping with outreach for Cal Poly. He credits going to the university as the second-best decision he ever made (the first was marrying his wife).

“The Learn by Doing philosophy is a real thing. I used that when I was a professor,” Bautista said. “The amazing professors at Cal Poly held me to a really high standard and I had to do the work. Even though I was a good athlete, I still had to turn my stuff in.”

The work ethic Bautista learned at Cal Poly, along with the coaches, educators and friends he made there, have served him his whole life.

“My goal was the Olympic games, and I made it on staff twice,” Bautista said. “It’s just been a great path.”

There were more Mustangs whose jobs took them to the Tokyo Games. Read more about them in Alumni Updates.