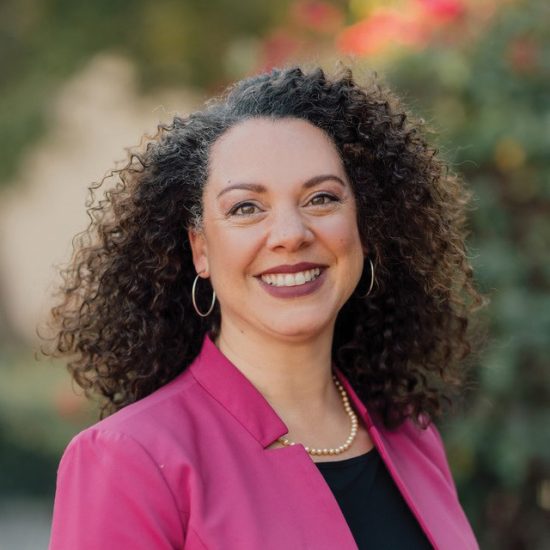 This fall, Cal Poly alumna Erica A. Stewart (Home Economics ’97) was appointed mayor of San Luis Obispo. Stewart has been a member of the SLO City Council since 2018, works at Cal Poly Campus Health and Wellbeing, and has been both an ASI president and president of the Alumni Association. She will finish out former mayor Heidi Harmon’s term, which lasts through the end of 2022.

We met with Stewart to ask her about her plans for city governance and how her time at Cal Poly has prepared her for leadership.

You first came to SLO for college, then left after graduation, then eventually moved back. What does SLO mean to you? What keeps drawing you back to this community?
Community engagement is high here — not just with city government, but in the Chamber of Commerce and nonprofits too. People are really involved. I think that’s really helpful, and that’s how I like to live. When we moved to different areas, I realized that’s not the norm.

What do you think are the biggest challenges facing the city of SLO? What do you want to address during your time in office?
We have to figure out some compromises and some more help for people who are unhoused. There are so many different reasons why someone could become unhoused. We’ll be putting together a mobile crisis unit combining law enforcement, mental health, EMTs and social workers. That hopefully will actually get people the help they need, which then might help them to be able to make choices that are better for themselves and the community around them.

We need to work with home developers locally, and with the state and federal government, and figure out how we can do better at creating more affordable housing. We’re continuing to work on public transportation, looking at getting another electric bus, and really trying to reduce greenhouse gas emissions and get closer to our carbon neutral plan as a city. Lastly, I’m really hoping within this year that we can hire a head of diversity and inclusion for the city, develop our diversity and inclusion strategic plan, and find ways to get more people involved.

How does your role change going from city council member to mayor? What are the new opportunities? What are the new challenges?
I was just at a mayor’s meeting for lunch and we were talking about how surprising it is, how many more people want to meet with the mayor. I think that people have watched a lot of TV or they’ve come from more urban areas where the mayor is the one in charge. SLO has a strong city manager format, so technically I have an equal vote on all decisions as my colleagues on the city council. All five of us have just one vote each. However, I do get to meet with the city manager weekly and help guide the agenda.

You are the first person of color to serve on the SLO City Council and now as mayor of SLO. What does that mean to you? What do you think it means for the community?
When I first ran for city council, I didn’t want my identity to be the reason for someone to vote for me. That’s not the point here. I hoped that it was my passion and goals and ideas for moving the city forward. But as I campaigned and after I won my seat, I realized how important it was for people to see someone like themselves in this role. I’m a mom, I work full time, I’m a person of color. All of those things might be a factor when someone thinks, “I could never do that job.” But hopefully seeing me here shows them that they can be in leadership or elected office. I would just really encourage people to look into their local community and see how they can get involved.

What have you learned at Cal Poly, either as a student, as a volunteer leader, or as an employee, that has prepared you to serve as a civic leader?
Serving as ASI president was such an experience for me, starting back in the ’90s, gaining an understanding of enterprise funds and how to manage many different departments and navigating different line items in a state budget. That is something that has been very helpful to me, not just now, but in my entire life since I graduated.

Working as a staff member and a volunteer has shown me how to navigate the needs of an organization and match those needs with the talents of people who want to get involved. Helping others learn how to partner and communicate is what I take into my work with the city on a regular basis.