Even during the summer — even during a pandemic — Learn by Doing never takes a break at Cal Poly. And this year, undergrads from nearly every college collaborated with faculty to conduct hands-on research, creating new knowledge and solving problems across the local region, the state and the nation.

Many of these projects are sponsored by a Summer Undergraduate Research Program (SURP), a set of college-based initiatives that provide grant funding to students and faculty who partner on a 10-week research project. Four of Cal Poly’s six colleges have launched a SURP initiative, from the College of Science and Mathematics, whose program is supported by a generous endowment from alumni Bill and Linda Frost, to the College of Liberal Arts, where a brand-new program sponsored eight student researchers in its inaugural year.

Want to see how these students spent their summer? Dive into a few of this year’s projects.

On the northwestern edge of campus, glimmering rows of solar panels at Cal Poly’s Gold Tree Solar Field angle themselves toward the sun, generating millions of kilowatt-hours of electricity each year and saving millions in energy costs. But there has always been a challenge: because the solar field is set on the naturally sloping landscape, several rows of panels cast shadows on each other when the sun is low in the sky, which chips away at the overall power output.

The point of SURP is for you to figure it out.

Sophie Getty and Ryan Dubois, both mechanical engineering students, are collecting data in the field and running tests in the lab as part of the SURP project. One of their first steps is to better assess the physical conditions in the field — wind speed, panel temperature, the sun’s radiance, angles of the panels, and geometry of shade patches. All of these factors affect how well a panel can produce energy.

“We’re trying to predict panel temperature based on weather conditions, which has turned out to be really difficult mostly because wind gets affected a lot by the panels themselves,” said Dubois. “The wind speed is really different on the first row than it is in the middle of the field.”

The researchers routinely referred back to reports by previous student researchers who have laid the foundation for this work over the past few years. The SURP model empowers students to design their own data collection methods, which has allowed Getty and Dubois to test different tools and hypotheses in hopes of standardizing the way others monitor their solar fields.

“The point of SURP is for you to figure it out,” said Getty. “That was scary, but I really liked the flexibility of the job, and we’re building relationships with our professors.”

The Price of Discrimination 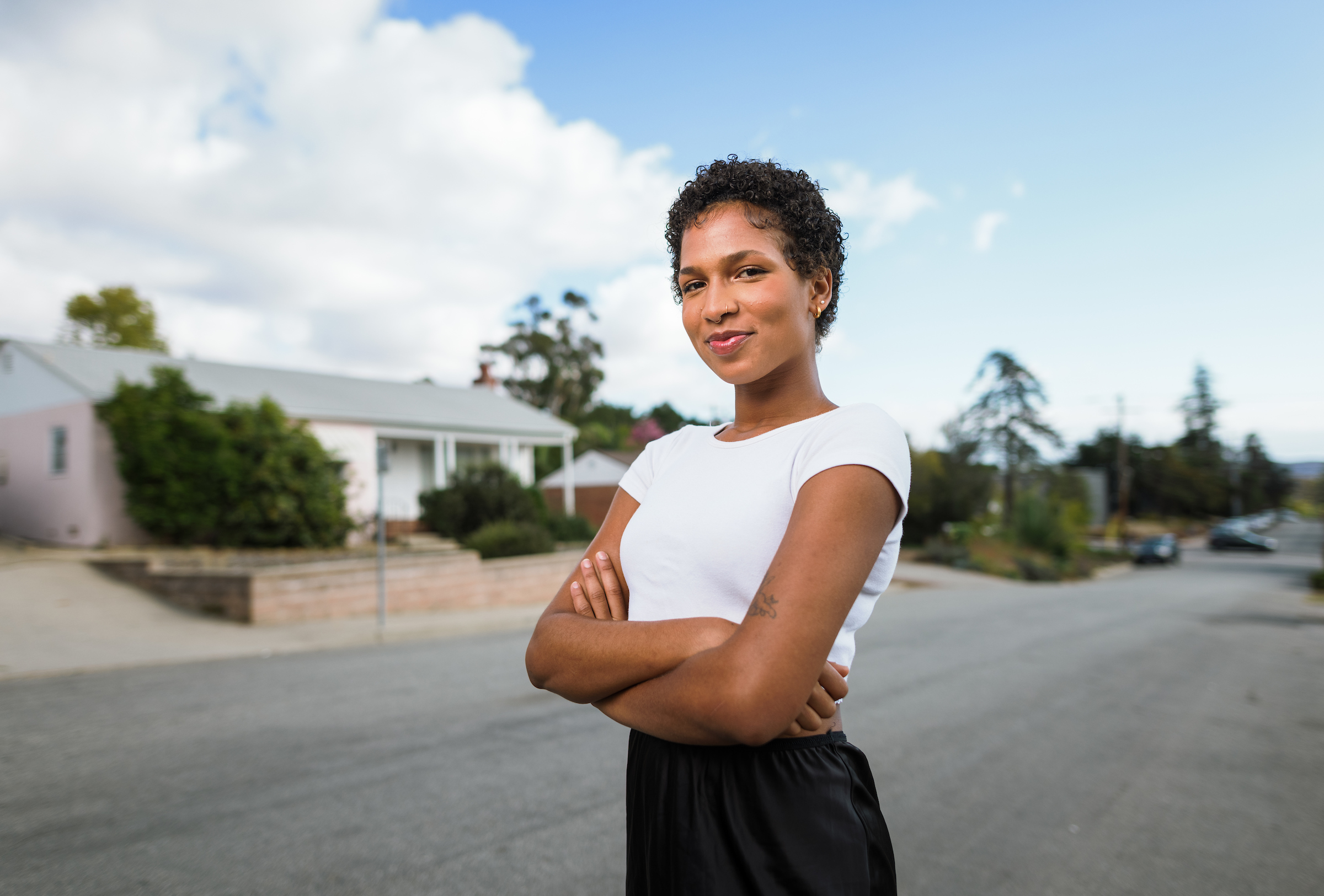 Race-based discrimination in housing has been well-documented over the years, from redlined neighborhoods of the early 20th century to the ongoing anecdotes of Black-owned homes being undervalued on the market. But just how much does this phenomenon cost Black homeowners today?

This summer, in one of the first SURP projects ever conducted in the College of Liberal Arts, third-year psychology student Yazmeen Norwood worked with Professors Amber Williams, Julie Garcia and Carrie Langner to develop an experiment quantifying the impact of racial bias on how a home price is evaluated.

The premise: randomly-chosen subjects are shown a video tour of one of two identical houses and asked a series of questions about them, including how much the respondents would expect them to cost. The variable: in one of the houses, the photos on display throughout the house show a generic white family, in another, a generic Black family.

“This kind of research has the potential to create tangible changes in regards to housing discrimination — that’s especially important when it comes to assessing who has access to generational wealth, because owning and passing down property is a significant factor,” said Norwood. “It’s important to share ideas and educate, but we can’t forget that tangible change results from observation, asking questions and real-world application.”

Norwood’s role was to help the professors develop the three houses to be used in the study. By using Photoshop and running a series of surveys evaluating how convincing the homes looked, she worked to remove all other variables besides the race of the “homeowners.”

Research allows me to ask questions in a way that challenges what we know.

“Yazmeen has been invaluable, because making sure the homes and the two families are as realistic as possible is the whole foundation of the study,” said Williams. “She’s got the kind of initiative that is really important if you’re going to go into research, and the kind of thinking you have to have when you approach a research project.”

That’s important to Norwood, who wants to continue as a researcher and eventually work toward a Ph.D. in psychology. “I’m a very curious person — when I hear a statement or a statistic, I don’t just say ‘okay’ — I want to find out why,” she said. “Research allows me to ask questions in a way that challenges what we know.”

How do you take an entire middle school science class scuba diving? Virtually, of course.

Biology student Meg Beymer spent the summer creating a lesson plan that uses virtual reality (VR) to teach marine science. Her work was funded through a partnership with the Santa Rosa Creek Foundation and the STEM Teacher and Researcher Program.

Dive Beneath the Surface, as the educational VR experience is called, helps elementary and middle school students fall in love with marine science even if they’ve never seen the ocean.

“I love talking to young students and getting them excited about the ocean,” said Beymer, who introduced children to marine invertebrates during the course Communicating Ocean Sciences. “My favorite part is when I get to see their eyes light up when they touch the animals. My hope is to spread some of that same awe with this DiVR 360 lesson plan.” 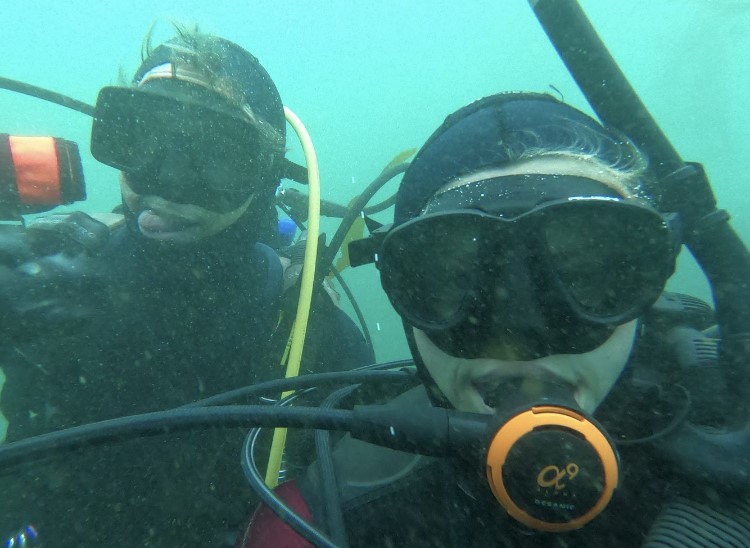 “The middle school students are really learning the process of science, not just memorizing terms,” said Crow White, a marine sciences professor and co-leader, with electrical engineering Professor Lynne Slivovsky, of Dive Beneath the Surface. “Plus, they get to experience the ocean and appreciate its beauty and complexity.”

To bring their knowledge of marine biology to life in the classroom, the research team had to get certified in scientific diving, learn underwater videography and video editing, and find out how middle school students learn.

“Hopefully, we will inspire some future marine scientists,” said Beymer. “This project made me realize I am meant to be an educator, and I look forward to creating Learn by Doing projects like this one for my future students.” 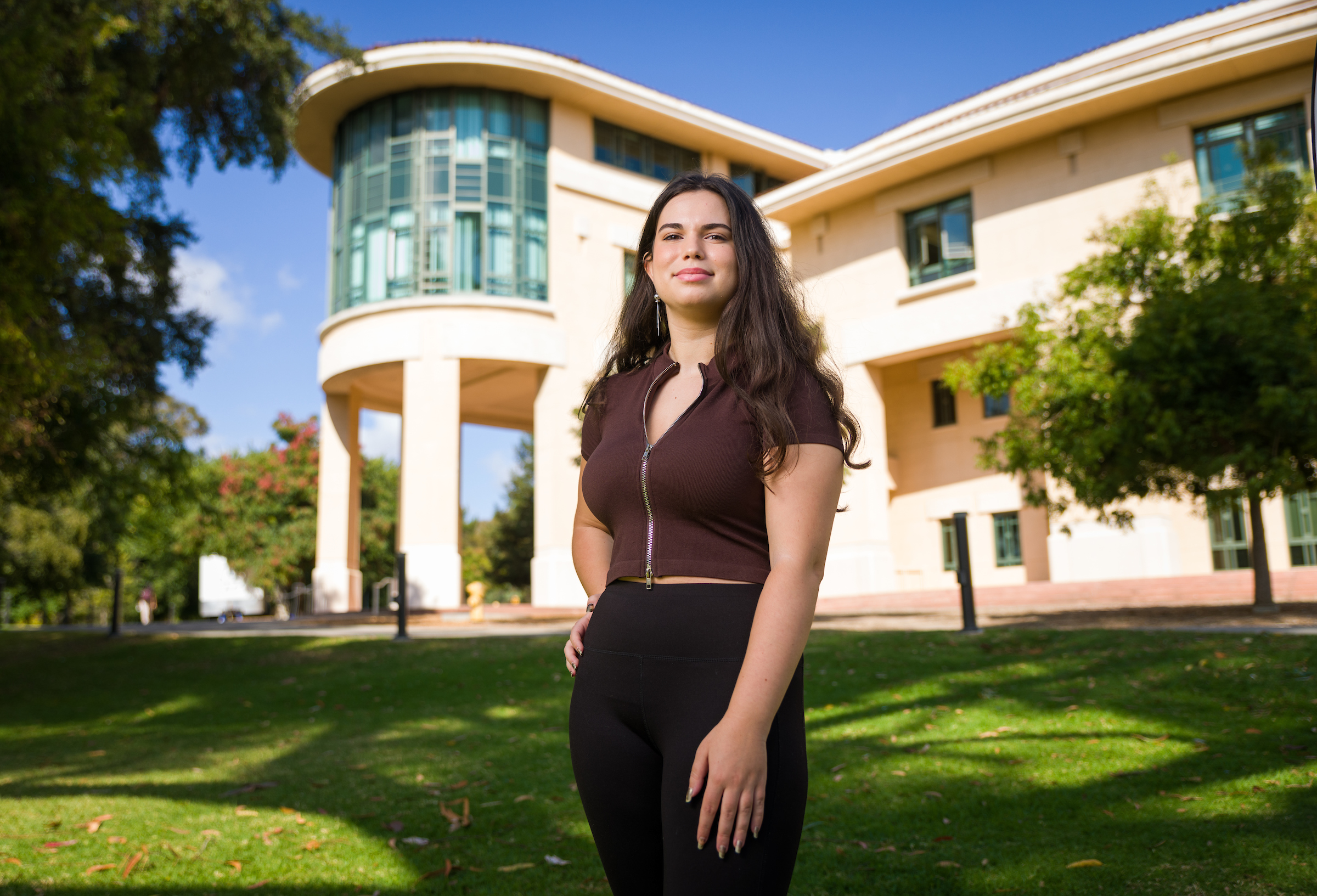 Economics student Julie Gelman at the Orfalea College of Business, where she spent the summer analyzing data on income inequality as part of a 10-year research project. Photo by Joe Johnston.

Over the summer, third-year economics major Julie Gelman worked with Professor Jonathan James on his 10-year study on income inequality between different age groups, ethnicities and genders. It was one of the first SURP projects from the Orfalea College of Business.

Gelman analyzed data that helped her understand how the income differences in these groups are affected by the hours worked early in their careers, with long-term impacts on their future wage growth.

Conducting her research and analysis completely virtually, Gelman was able to work independently while also connecting with James to answer questions. Since the program’s 10-week timeline was condensed into only five weeks, Gelman put in full-time hours.

“Julie played an important part in furthering this research,” said James, “not only by dealing with the nitty gritty of data analysis and modeling, but also in focusing on the bigger picture and how these pieces can be brought together to better understand the labor market.”

The research project put Gelman’s econometrics skills to the test, as she built and analyzed data sets, while also creating graphs and charts to illustrate her findings. She said finding her own data sets was particularly helpful experience, because it forced her to find trends on her own, rather than relying on other sources.

Gelman found a mentor in James, checking in daily to raise questions and stay on track. “He found a lot of interesting articles and academic papers for me to read, which gave me a lot more insight on the information we were studying,” Gelman said.

Another update to her resume: Gelman gained hands-on experience with programming languages as she applied different analytical functions to the data.

“Having these skills will definitely help me adapt to my real-life job in the future,” she said.