When Gillian Larson graduated from Cal Poly in 2014, she knew she needed a break before heading to grad school at Cal State Northridge in the fall. Larson, who grew up riding horses on day trips through wilderness areas, didn’t want to go abroad — she’d done that in college and missed her horses terribly.

When her mom mentioned an article about a woman who had set a speed record for hiking the Pacific Crest Trail (PCT) from Mexico to Canada, it stuck.

“I wanted something during that window of time that was going to recharge me, and it felt like this thing I had been looking for fell into my lap,” she said. “I get to do something for six months with my horses — fantastic!”

She studied up on the trail and prepared her two horses as well as she could, but the trek up the mountainous spine of the West Coast proved to be much more difficult than she originally thought.

“I had committed on the fly to doing this, and as we got closer to departure date, I was not very prepared,” she said. “I was trying to read a lot, trying to find resources online that would hopefully help me, and there was basically nothing to help me with the horse side of stuff. I read the hiker blogs and figured out what the hikers do, but the horse side of things was all very much on the fly.”

To add to that, Larson’s accelerated timeline to finish the trail by mid-August in time for grad school threw a wrench in things.

Gillian riding Zahra and leading Takoda, acting as packhorse, on the Pacific Crest Trail near Lancaster, California, in May.

“That was the crux of my error. I was a month ahead of schedule, so the snow was not melted, and I was constantly encountering impassable snow obstacles at high elevations and having to backtrack and try again later,” she said. “I feel like I cried almost every day because it was so much harder than I expected, and I had a lot of self-doubt because I could find information that people had started and finished a leg of the trail with a horse but no information on what they did in between, or if it went well. I wondered if I was just awful at this.”

But despite the difficulties, Larson persevered and became the youngest person to ever thru-ride the trail on her first attempt. It wasn’t until she began her graduate program that she understood what the trail had given her.

“In the normal world, you feel like you’re in a hamster wheel. It’s hard to grasp what you’re accomplishing,” she said. “Being on the trail is very simple, but you have to work for every mile. You feel like you get so much done when you’re out there, and you feel so much more grounded and present on a daily basis.” 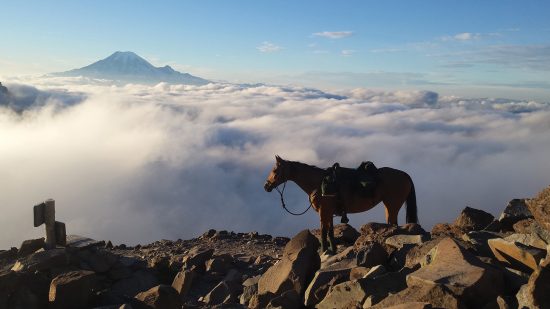 August 2016 on the Knife’s Edge section of the Pacific Crest Trail in Washington with Shyla, showing Mt. Rainier in the background.

It was that gift, and the knowledge that she could learn from her mistakes on the first attempt and do better, that spurred her to ride the trail again in May 2016, at the end of her graduate studies.

“I had to release a lot of expectations and better understand what wasn’t in my control. Hikers can power through if there’s a lot of snow, but you just can’t do that when you have a horse,” she said. “It’s very humbling to constantly be told ‘no’ by the trail and constantly thinking about what your horse can do physically and mentally.”

The second ride, while not without hardship, went much more smoothly.

“I loved my second PCT ride,” Larson said. “There were still things I couldn’t predict, but I felt like I knew how to be a better caretaker for my horses. I knew what they needed, and I was able to do the trail a lot smarter. After that, I was hooked.”

And the success of her second thru-ride came at a time when Larson was questioning her chosen path.

“I realized I liked biology, but I didn’t like some of the career options. I wanted to teach, but the process to get through my graduate degree was not a pleasant one, so I decided I wasn’t quite sure about that anymore,” she said.

She continued trail riding: she completed the Arizona Trail and Colorado Trail in 2017, then rode the Continental Divide Trail (CDT) in 2018, becoming the first person to thru-ride both the PCT and the CDT. 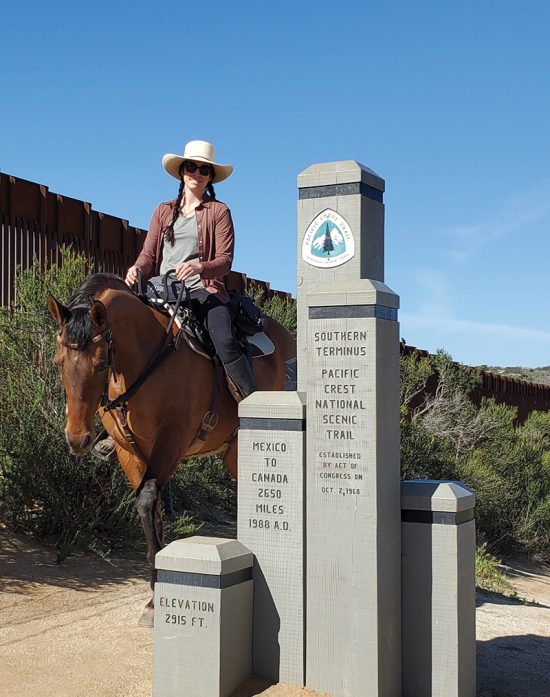 Gillian with her horse, Takoda, at the southern terminus of the Pacific Crest Trail near Campo, California, on April 13. It was the start of Takoda’s third PCT thru-ride with Gillian.

And in the meantime, she started her own business, which teaches people wilderness horsemanship. She gives workshops on how to travel in backcountry with horses, giving tips on nutritional needs, gear and training.

“People have very different styles on traveling in the backcountry. Someone who rides in Arizona and someone who rides in Wyoming have very different obstacles and constraints they’re facing, so tips for one area don’t always work for another,” she said. “Learning there is a limit to where certain advice works and trying to keep that in mind, I always try to be honest about when something might not work. I have a little more nuance I can bring to people, based off my experience in many types of terrain.”

In the spring of 2022, Larson, who recently graduated with a master’s degree in agriculture education from Cal Poly, started her third thru-ride on the Pacific Crest Trail.

“Doing the PCT for the third time is probably the most anticlimactic trip because I know what’s around the corner, but I still like being out there,” she said. “I have a bunch of new horses, so the focus is on them and trying to see if they’re prepared enough and bringing them along, making sure they have a positive experience.”

You feel like you get so much done when you’re out there, and you feel so much more grounded and present on a daily basis

While she completed her first two PCT rides with the same two horses, this trip Larson is bringing along five horses, all of which she trained in the last several years. Her mom, recently retired, is acting as support crew. There are about three horses on the trail with Larson at a time, and they are switched out and brought home for about a month of rest regularly.

“I get a lot of pleasure out of bringing my newer horses along and seeing how they’re doing on the trail. That’s very rewarding,” she said. “Some of them came to me in rough shape, and I think, ‘I can’t believe you’re actually out here and we’re doing this after where we started.’ That’s very satisfying.”

As her life path has shifted and changed, she sees the impact that Cal Poly has had on how she’s handled setbacks, unexpected turns and new beginnings.

“I feel like a lot of the time, the path we think we’re going to set out on when we’re in college or when we freshly graduate is not the path we’re still on a decade later. Being able to be adaptive and being able to think critically is the skill I use the most, and that’s what I’ve gained from Cal Poly,” she said. “I’m not in the biology field anymore, but I loved studying it and I loved how it taught me to think and how to be a good researcher. I learned all of those skills at Cal Poly, and that’s what I use every single day.”

Scroll for more photos of Larson on the trail