By Connor Leary and Catie Logan

2022 marks the 50th anniversary of Congress’ passage of Title IX, legislation that prohibits sex-based discrimination in all schools receiving federal financial assistance. Although the text of the law makes no reference to athletics, it was later determined to encompass all aspects of a school’s operations, including intercollegiate sports programs. One study found that, between the implementation of Title IX and 2006, there had been an almost 500% increase in the number of female collegiate athletes.

Over the last five decades, the legislation opened up doors — program funding, scholarships, facilities and coaching — that turned into opportunity for thousands of female student-athletes at Cal Poly. Title IX didn’t just mean more women got to play, it meant many could be the first in their family to attend college and pursue their dreams.

Three Mustangs, including one heading into her final season as a student-athlete, shared how the legislation changed the game for women in sports.

Playing for Something Bigger 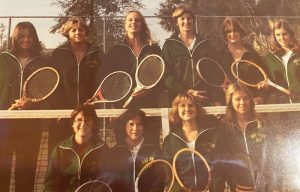 Jeanne Myers (back row, second from right) received one of Cal Poly’s first women’s tennis scholarships in the late 1970s.

In 1975, Jeanne Myers (Friedrich) began her tennis career at Cal Poly after transferring from Ventura Community College. Before Title IX, the women’s tennis team was a club sport that didn’t have uniforms, an official schedule or even a designated place to play (the team was not allowed to use the men’s courts).

Myers was offered one of the first women’s tennis scholarships at Cal Poly. She was on the No. 1 doubles team and played at the No. 2 singles spot. Looking back, Myers recalls how honored she felt, “playing for something bigger.” She said being in a league motivated the team to work harder, practicing three hours a day and traveling on weekends for matches.

“Being a part of a team gave me all the motivation I needed to stay in school,” she said. “It gave me a need and desire to go to school every day.”

In 1979, Myers graduated from Cal Poly with a degree in liberal studies and stayed an extra year to be a student teacher. She then went on to be a special education teacher.

If You Can See It, You Can Be It

In 1995, Sara Clarin (Stockton) began playing softball at Cal Poly when the program was only in its second year as a Division I sport. 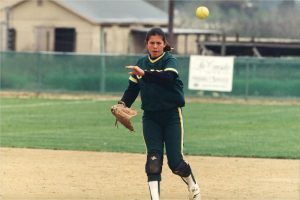 Sara Clarin was a record-setting hitter for the Cal Poly softball team from 1996-99.

As a child, Clarin played little league baseball on a boys team. She said she didn’t play on an all-girls softball team until theage of 13.

“Although bigger cities had girls teams, my small town didn’t,” she said. “The all-girls teams were a product of Title IX. Title IX opened the door in terms of more opportunities as I got older and moved up the ranks of sports.”

In 1997 and 1999, she was named First Team All-Big West, and her .328 career batting average still ranks ninth in program history. Off the field, she earned bachelor’s and master’s degrees in kinesiology, which fueled a career in coaching at Cal Poly and Cuesta College.

Today, she tries to instill the legacy and history of Title IX in her12-year-old daughter, teaching her about the progress that’s been made in women’s sports.

“We tell her, ‘If you can see it, you can be it.’ We like to expose her to as much as we can, such as watching female sports on TV,” Clarin said. “I also show her the history of inequality that my alumni friends and I faced. We stand on the shoulders of those who came before us. It’s important for her to appreciate the opportunities she has today.”

Meredith Phillips is heading into her senior season on the Cal Poly volleyball team this fall. She’s been playing volleyball since she was eight years 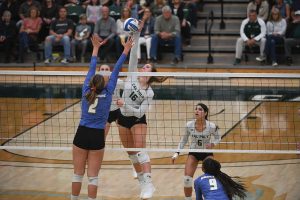 Meredith Phillips, No. 16, heads into her senior season leading the women’s volleyball team in blocks and kills.

old, when she fell in love with the sport after watching her sister play.

After all-star seasons playing for Memorial High School in Houston, Texas, Phillips was offered a full scholarship to Cal Poly, something she says she can thank Title IX for.

“I wouldn’t be here if it wasn’t for Title IX,” Phillips said. “It is such a blessing to be able to play a sport in college, and if Title IX did not exist, it would make playing extremely hard for girls. It gives everyone an equal opportunity to continue to play their sport at an extremely high level, and I think that ability is something that is indescribable.”

Since arriving at Cal Poly, Phillips has earned All-Conference honors every season she’s played as a Mustang while earning All-Academic honors for her work in the classroom as a kinesiology major.

Phillips says being a student-athlete has helped her grow not only as a player but as a person and has helped prepare her for life after volleyball.

“Playing a sport collegiately has completely changed my life,” she said. “I have learned and grown so much in ways that have prepared me for the real world.”