One of the most powerful tools in the Learn by Doing tool chest is the wealth of opportunities at Cal Poly for undergrads to take part in the discovery of new knowledge. Over the spring and summer, hundreds of students participated in faculty-led, peer-reviewed research projects, whether through specific research- focused Cal Poly initiatives like the Summer Undergraduate Research Program and the Frost Scholarship, or just through connections made with their course professors.

Check out these recent examples of student-faculty scholarship bringing new knowledge to life.

Civil engineering Professor Stefan Talke and his team of five students have spent their summer constructing and fine-tuning low-cost tidal and wave sensors, testing them at the Coast Guard Pier in Morro Bay and the Cal Poly Pier.

Tide sensors that the National Oceanic and Atmospheric Administration (NOAA) use to monitor tides can cost tens of thousands of dollars and are only situated every 50 to 100 miles along the California coast.

Developing low-cost alternatives could help scientists and communities determine things like sea level rise, tsunami impacts, extreme weather events and even the best times to go surfing. Another plus of developing sensors for both waves and tides: right now, most sensors only work for one of those things, so gathering more comprehensive data is a challenge.

Talke likens it to the rise of Waze and other traffic apps. Twenty years ago, traffic monitoring had to be performed by helicopter or government instruments, but now people can send in their data to an app, where it’s freely available to just about anyone.

Abby Neal, a third-year electrical engineering student, says she’s working on a way to connect to the sensors on the board via WiFi and cellular connection, which would allow people to see the data remotely and in real time.

“It’s a way to make seeing the data really easy and usable,” she said. “There are so many interesting ways to involve electrical engineering in this project.”

Caleb Dennis, a fourth-year computer engineering student working on the project, is helping on the software side of the sensors, primarily microcontrollers. One of the challenges he’s focusing on involves the power supply on the sensors, which rely on solar power and periodically need to shut off to conserve energy.

“It’s very closely related to my major,” Dennis said. And on top of that, it relates to something he loves: surfing and being in the water.

Neal, also a surfer, said she hopes to continue working on the project in the fall.

“It’s a lot of soldering, but so far the coolest thing is applying the things I’ve learned in my classes. It’s very satisfying.”

A Deeper Look at Space

Aerospace engineering student Melina Ruano grew up in East Los Angeles, where she rarely saw the night sky due to light pollution. It wasn’t until middle school that she started learning the basics of astronomy, which awed her.

“It really interested me because of this crazy concept of these objects being so far away,” said Ruano. 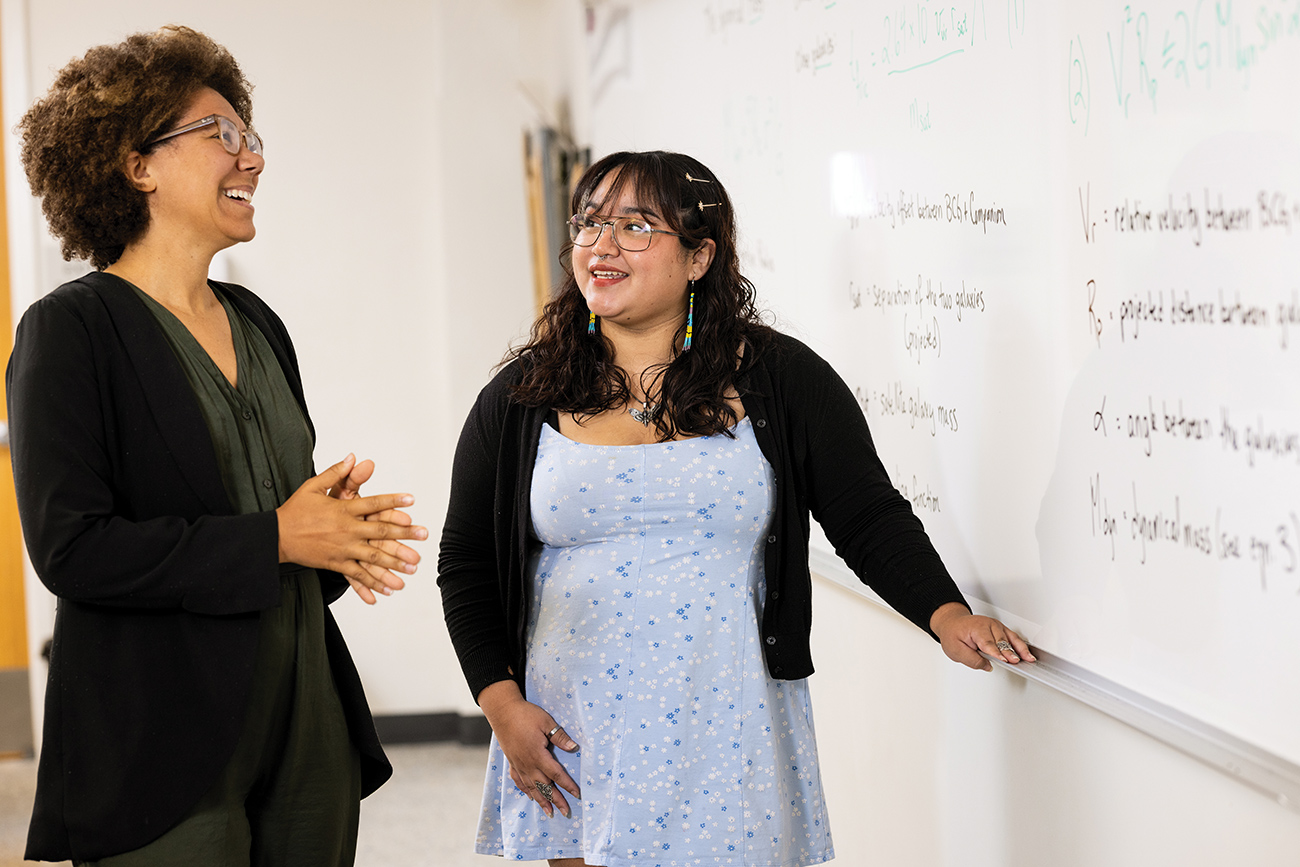 Now Ruano is president of the Cal Poly Astronomical Society and one of a group of Cal Poly and Cal State Stanislaus students developing new technology that could help discover never-before-documented galaxies.

The team is working directly with the Vera C. Rubin Observatory Project, helping to build computerized mapping and data tools to record and study images that will be captured via the massive new Rubin telescope, which is currently under construction in Chile with plans for completion in 2024.

When the telescope is finished, the world’s largest digital camera will be attached and astronomers will be able to view space objects over 10 billion light-years away from Earth. The camera was designed by SLAC, the Department of Energy’s National Accelerator Laboratory which is located on the Stanford University campus.

“We are building testable predictions of the evolutions of the stars and galaxies using a dataset simulated to match the data coming off the new telescope,” Edwards said. “We get to explore that simulated universe using the tools we’ll need in two years when real data comes online.”

Ruano enjoys working with a group of like-minded people, who share a passion for astronomy and how coding applies.

“It is a huge part of the project, because the more knowledge you share amongst each other, that knowledge is transferred,” Ruano said. She added that working with Edwards, who is also a person of color, has been encouraging for her.

“That was so welcome for my own growth,” Ruano said, noting that Edwards is always open to answering her questions. “I think she’s an amazing mentor.”

A storage shed is probably not the first thing you’d notice on someone’s property. But there’s an important cultural and architectural significance that comes with utility buildings like this — one that lecturer Dylan Krueger and a team of students brought to life this spring with a research project that yielded the newest experimental structure in Poly Canyon. 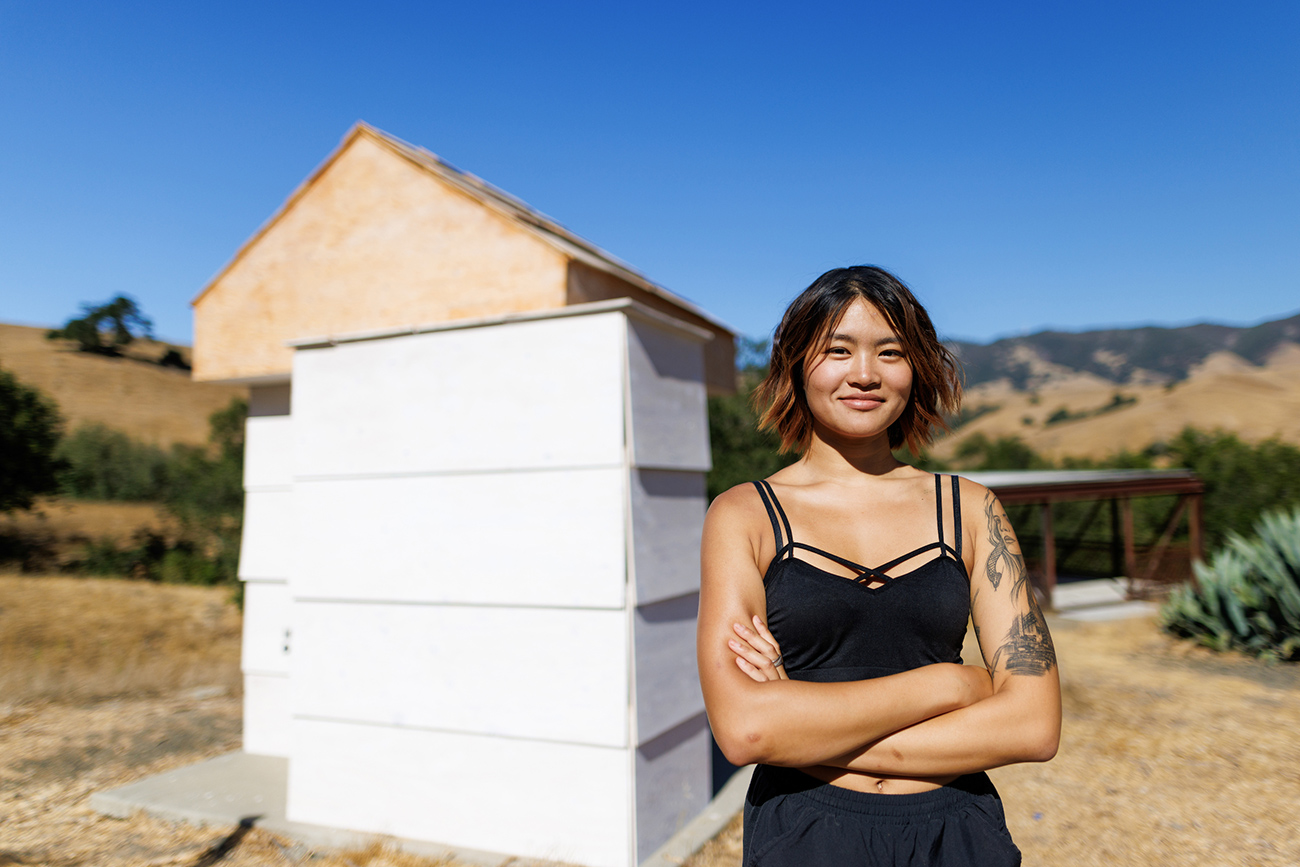 Dara Lin with the experimental structure she helped build with lecturer Dylan Krueger.

The structure is unassuming — at first glance, it could be just a supply closet for the facility. That is, until you notice the odd details. The structure’s mass is slightly imbalanced, the roof is just a little off-center, the lap siding is deliberately scaled a little too big for the building, and there are no windows or doors. It’s designed to catch your attention only on a second glance.

For architecture and construction management senior Dara Lin, working on the project was one final opportunity to put her learning into practice before graduation.

“As architects, we spend a lot of time designing through modeling software, where everything is perfect — corners snap together perfectly and everything is sized just how you want it,” she said. “But in real life, the wood might be bowing or the texture is uneven or there are imperfections in the field conditions that you have to fix. This was a really valuable lesson in those field fixes.”

At an even more basic level, the project was an opportunity to get hands-on experience in wood frame construction, a ubiquitous technique in the industries many of them will be going into.

“A lot of times the first project that you work on is a house, and in America specifically, wood frame construction is just how you build houses,” Krueger said. “I had a lot of students who were about to graduate and go into the field, so it’s a knowledge set worth knowing.”

That experience was particularly valuable for Lin, who begins a new job at a combined design-build firm in Oakland, California, this summer.

“What interests me about architecture is being able to look at a wall and peel away the layers and see the assembly beneath,” said Lin. “There’s nothing better for that than actually seeing a structure go together.” 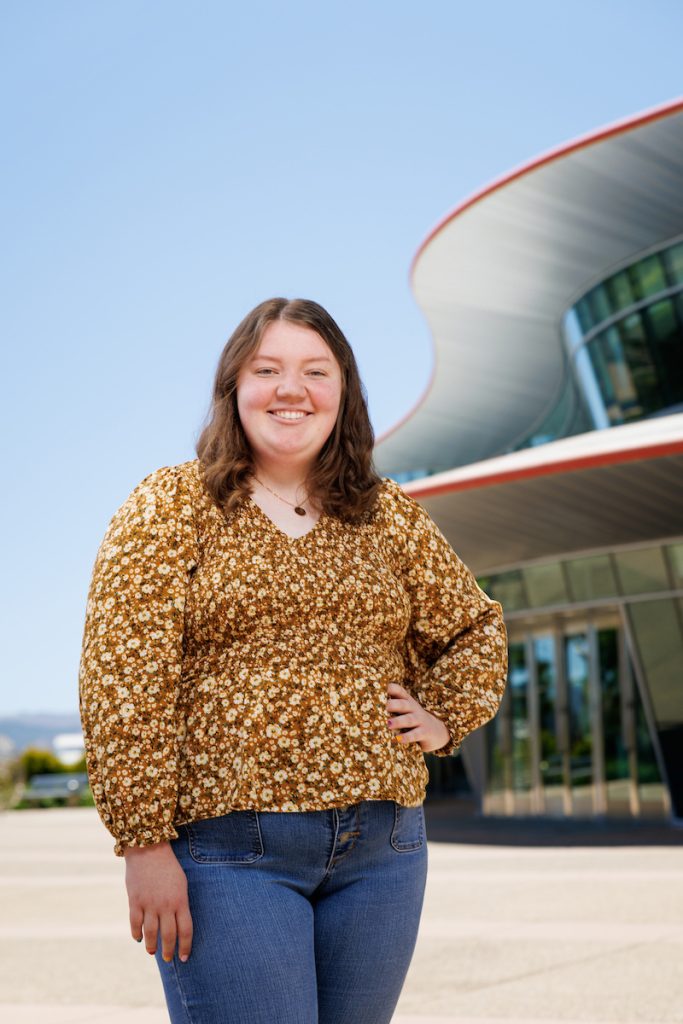 When you hear someone talk about theater, you might picture a play or musical acted out on a stage before a seated audience.

But theater can cross over into nearly any interactive experience: theme parks, for example, contain elements of theatre, as do video games, according to Lauren Beck, a lecturer in the interdisciplinary studies in liberal arts department.

Over the summer, second-year history major Darcie Shugart worked with Beck to conduct research into how methods used in UX, or user experience, design can help audiences better interact with theatrical works.

“UX research often focuses on the journey people have through digital worlds,” Beck said. “UX researchers work to understand how people navigate complicated interfaces to assess how those experiences can be improved.”

Beck, an expert in technologically mediated theatre, noted that due to the pandemic, newer theatrical works have experimented with more digital technology and more individualized, interactive performances.

This is the first time Shugart, who has minors in Italian and theatre, has delved into research at Cal Poly.

“Coming from the traditional theater world, it has been really exciting to get to explore immersive theater and how UX fits into it,” she said. “We’re looking at how UX testing methods work for traditional websites and products, and how they can be applied to immersive theater.”

One of Shugart’s main focuses has been on theme parks and immersive fan events, like the Bridgerton Experience, which allows fans of the Regency-era Netflix show to dress up and attend a ball while mingling with actors in period costume.

“I went down a rabbit hole of looking at these experiences and the types of testing they’re doing,” she said. “It’s just so interesting to look at how they’re able to create these immersive experiences on such a large scale.”

In the course of her research, Shugart found a lot of research on theater and UX coming from the UX side of things, but not the other way around, Beck said. Beck and Shugart ultimately hope to use their research to create UX guidelines for theater artists.

“UX research and design methods change based on the goals of the creators of interactive environments,” Beck said, noting that a lot of commercial UX work is based around making the experience of being on websites seamless for users. “It’s so important that we adapt these methods to allow artists to gather the kind of data that will help make their theater works accessible to users with different needs, interests and backgrounds.”

A Better Way to Grow

On an early Wednesday morning in August, third-year agricultural science major Caleb Miller and fourth-year plant sciences major Tyler Smith have the entire greenhouse at the College of Agriculture, Food and Environmental Sciences’ Horticultural Unit to themselves. They’ve worked the past few months together growing and tending 56 cilantro and as many lettuce plants from seedlings.

The plants are key to understanding the effects of applying varying combinations of biostimulants — an organic material and/or microorganism that is applied to enhance plant resilience — and conventional and organic fertilizers on produce. The students, part of the college’s Summer Undergraduate Research Program, under the guidance of Plant Sciences Professor Ashraf Tubeileh, are researching which combination provides the most vigorous plants in a nutrient-deficient soil. 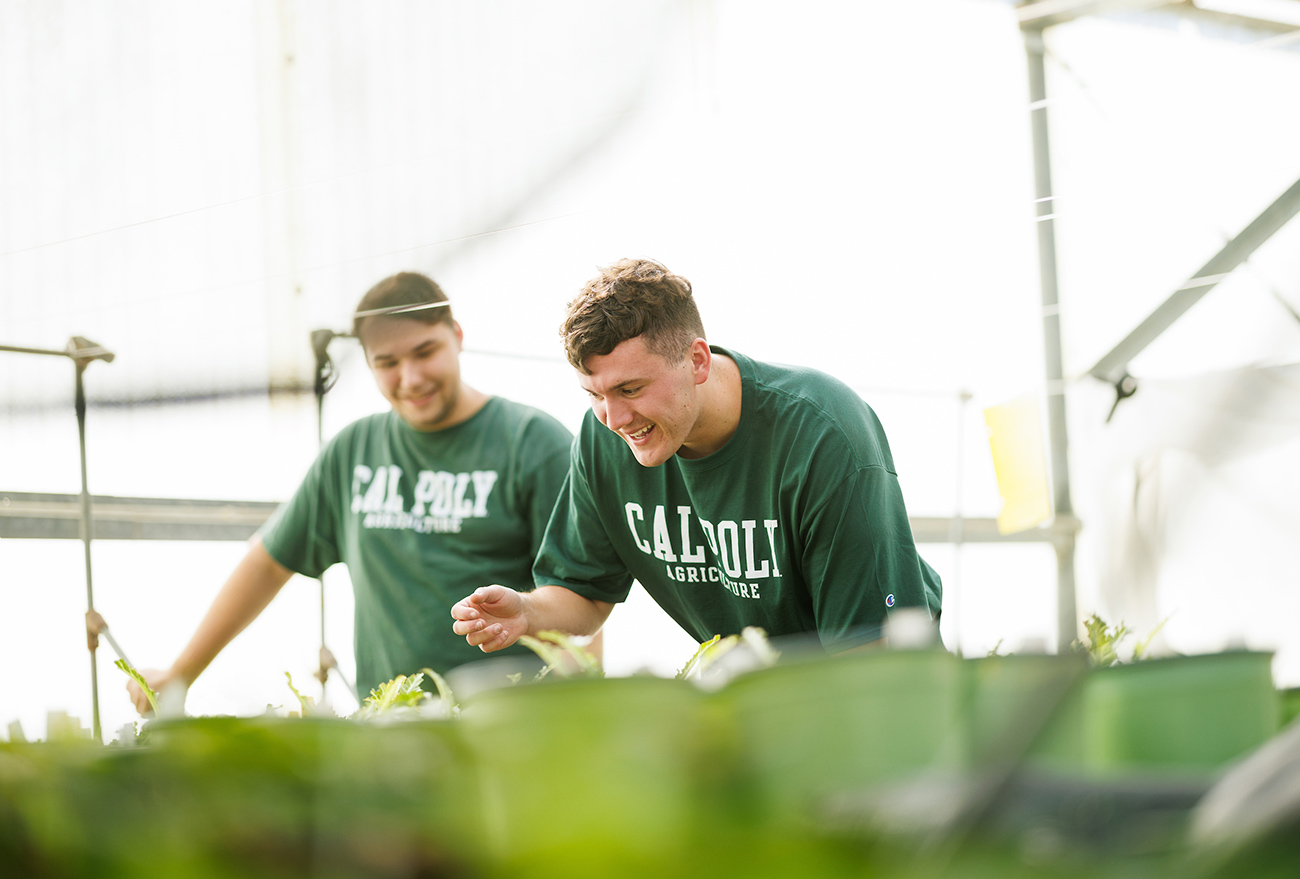 Students Caleb Miller and Tyler Smith inspect their lettuce plants as part of their summer research on new organic biostimulants.

California is the largest producer of food in the nation, and a growing population adds increased pressure for agricultural producers to meet the increasing global demand while finding environmentally sustainable ways to provide it.

The mounting pressure to produce more food organically is challenged by typically lower yields of organic crops than those grown by conventional farming methods — something that researchers are working tirelessly to change.

“Organic farmers don’t have many options to increase soil fertility and improve pest management,” said Tubeileh, who oversees Cal Poly’s Organic Farm. “Achieving something that would accelerate plant growth and pest control is crucial for them.”

Biostimulants such as the one Smith and Miller are testing are composed of organic materials such as fungus and plant matter, and can enhance the absorption of nutrients that are naturally present in the soil — making plants more productive and pest resilient.

Ultimately, the goal is to provide plants with the nutrients needed to grow at optimum rates, while ensuring long-term soil health. “The environmental impact of how we grow food is directly connected to the people we are feeding,” Smith said.

“This could be a game-changer in agriculture,” Miller said. “The organic biostimulants we are working with have shown that they improve the vigor and health of plants despite being planted in nutrient-deficient soil. Their introduction in California agricultural settings could allow farmers who struggle with low soil fertility to improve their harvest, thus reducing food scarcity.”