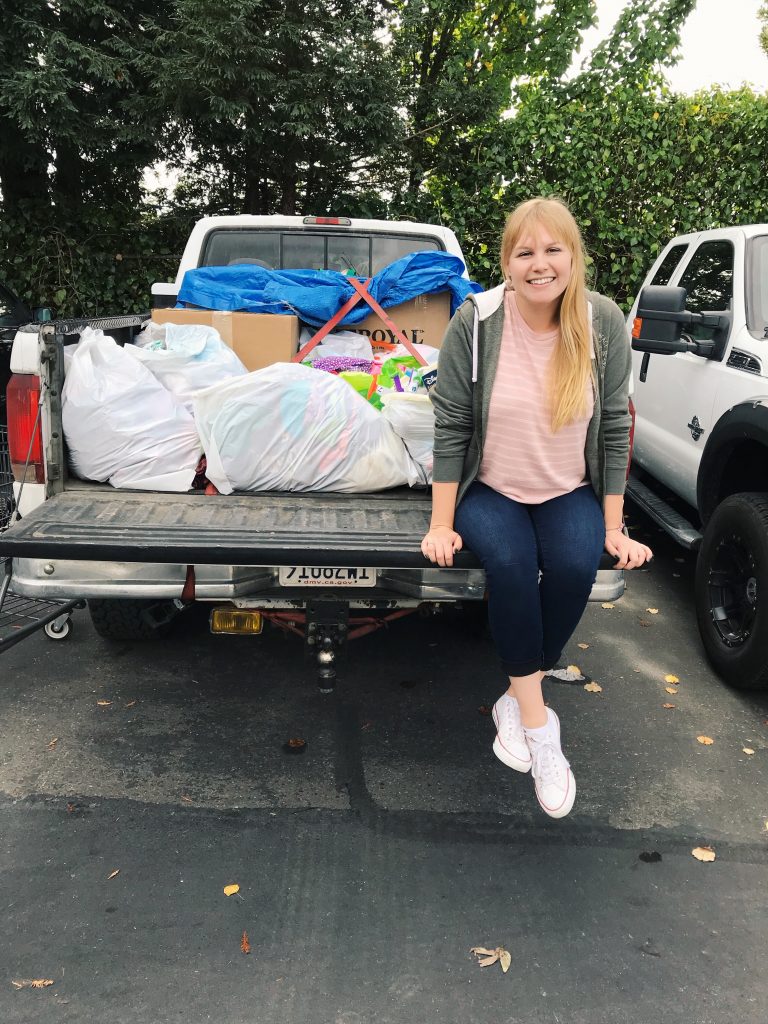 Graduate student Shelby Green was one of many Cal Poly students who participated in efforts to aid victims of the Northern California wildfires this fall.

When huge fires started to tear across Northern California, many Cal Poly students jumped into action. For some, the disaster hit close to home.

Jacob Everest was woken up by his roommates in the middle of the night. “There’s a huge fire in Santa Rosa,” they told him, “you’d better call your parents.” By the next evening, he was hightailing it to his home town.

Everest, a second year mechanical engineering major from Santa Rosa, CA, lived in SLO with several other students from the same area. By the time he was in the car, three of his friends at Cal Poly had lost their homes.

In between evacuating his own family from the fire, he spent the rest of the week volunteering at a local community center where over 300 people had taken refuge. Everest helped organize donations, set up the kitchen, and provide portable showers to the people who had lost their homes.

“People were really trying to volunteer, trying to help, trying to be there for the community even while their houses were on fire or near fire,” he said.

Though the fire was unpredictable and out of control, Everest’s house ended up being okay.

Back on campus, the ASI student government put together a toiletry drive to help the people of Santa Rosa. Students could drop off donations at the ASI office in the University Union and were encouraged to donate what they could. The bins quickly filled up with toothpaste, shampoo, and feminine products.

Everest’s roommate, Mark Borges, serves on the ASI board and helped out with the drive. “For a quick turnaround time I think it was successful,” Borges said. “You just hope whatever contribution you have goes a little bit of a ways.”

The drive ran from Wednesday, Oct .11 to the following Saturday and resulted in two cars full of donations.

Cal Poly graduate student Shelby Green decided to organize her own drive. Green, a SLO native, got her undergraduate degree just south of Santa Rosa at Sonoma State University. She posted on Facebook that she would be accepting donations for fire victims and was surprised to see the results.

“I would come home from class or student teaching and there would be a box on my porch almost every day,” she said. “The response was really overwhelming.”

Green’s mother teaches a second grade class at Sinsheimer Elementary School and had her students make cards for the fire victims. “They were precious,” Green said, “that was probably my favorite thing I took up there.”

Green accepted donations for a week and drove up to Santa Rosa with a truck full of clothes, toys, and household items on Oct. 19. She stayed all weekend, visiting people in shelters and distributing donations.

Though many places in the area are receiving donations right now, the places affected by the fire will need support in the coming months, Green said. “It’s important not to forget about it,” she said, “they’re going to be needing help for a while to come.”