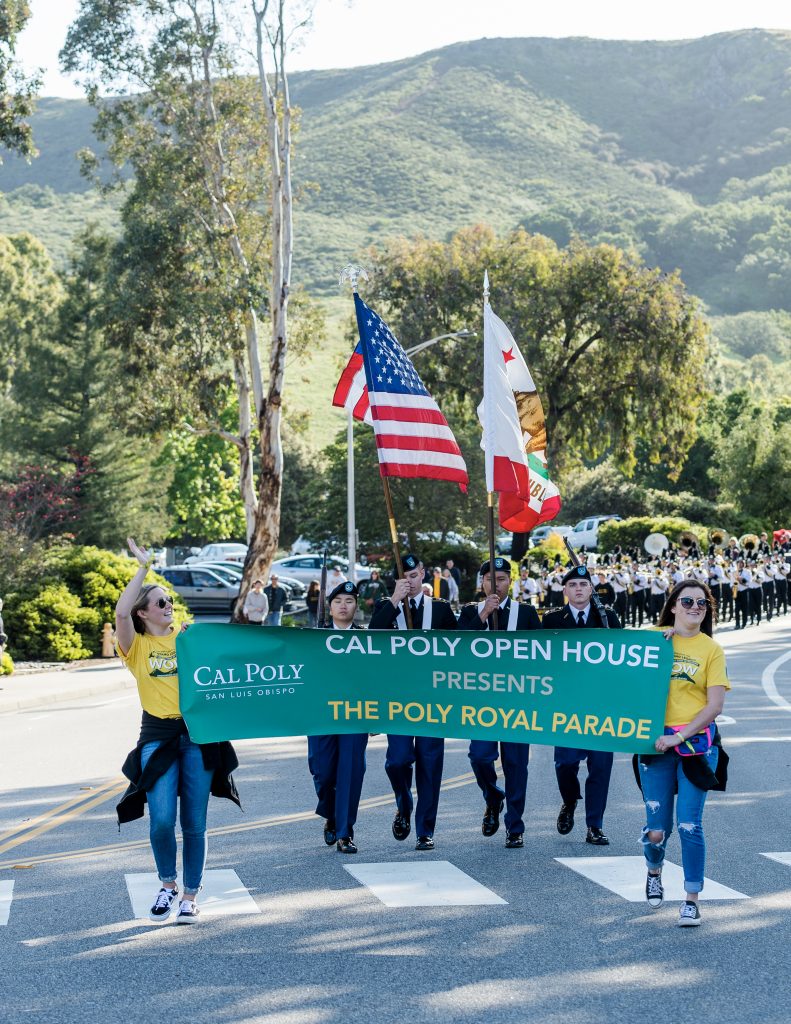 Open House, Cal Poly’s annual three-day showcase designed to connect new students and the public with all the best the university has to offer, was held April 6 through 8. The weekend’s highlights included a parade, events aimed at new incoming students, and the debut of the Poly Royal Rodeo in a new venue: Spanos Stadium.

The showcase kicked off on Thursday evening with Club Preview Night at the San Luis Obispo Farmers’ Market. This event gave new students an opportunity to explore downtown, take in local fare, and enjoy some live music while they learned more about Cal Poly’s student organizations.

On Friday, Admitted Students’ Preview Day, Open House participants had the opportunity to further explore the Cal Poly campus or take a walking tour. The day began with the University Welcome where newly admitted students and their supporters heard from President Jeffrey Armstrong. They then visited with college deans, faculty and current students and discovered many resources for new students.

Throughout the day, students attended interactive sessions at their chosen college and got their first chance to experience “Learn by Doing” at Cal Poly.  The day culminated in the annual Friday Nite Invite celebration. Students spent the evening getting to know one another through a series of games and activities.  Meanwhile, parents and supporters attended a coffee session where they learned about the next steps for new Cal Poly students.

Saturday was packed with popular events that were open to the public. The Poly Royal Parade, which featured Cal Poly and San Luis Obispo organizations, was the opening event of the day.  After the parade, there were demonstrations and concession booths representing more than 200 campus groups. The Poly Royal Main Stage and the Poly Royal Truck and Tractor Pull were, once again, Open House highlights.

Open House 2017 came to a close with the 77th Annual Poly Royal Rodeo, held for the first time at the Alex G. Spanos football stadium. A crowd of nearly 11,000 were in attendance, making it the largest collegiate rodeo event on record. For the event, landscape crews covered the stadium’s grass field with XX tons of dirt for 96 hours to turn the space into a rodeo arena.