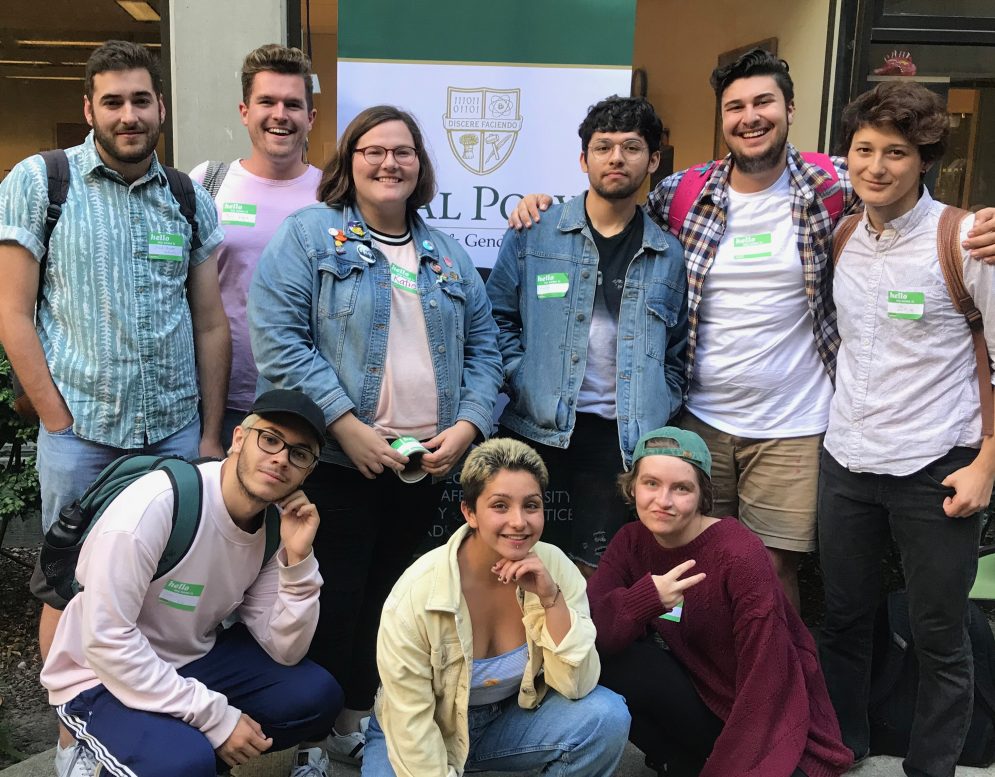 Matt Klepfer (back row, second from left) and other members of the Cal Poly Queer Student Union at the October 4 launch party for the new queer studies minor.

This fall, Cal Poly’s Women’s and Gender Studies Department announced the launch of a new minor program in queer studies. The new 24-unit program, which could see its first graduates as early as spring of 2018, was largely the result of student advocacy.

When fourth year political science major Matt Klepfer first came to Cal Poly in 2014, he noticed something was missing. “There was no LGBTQ student club on campus, which is really sad for a campus of 21 thousand people,” he said.

As a freshman, Klepfer helped start the Queer Student Union, a club for LGBTQ support and social justice work. He and other club members came up with a list of things they wanted to improve on campus. Course offerings related to the queer experience soon became a focus.

“Both queer studies and LGBTQ people are not very prevalent in our curriculum, and so that was a big one that came up in our club,” he said.

Klepfer and fellow student Mick Bruckner approached Jane Lehr, the chair of the Women’s and Gender Studies department, to talk about the lack of queer studies in Cal Poly’s course offerings. Lehr was surprised by the amount of research the students had already done on the topic, she said.

Though he was new on campus, Klepfer felt drawn to helping the cause. “I was a freshman and I didn’t know what queer studies was, really,” he said. “All I knew was that there was a huge absence of LGBTQ people and perspectives and histories and theories from the curriculum.”

Lehr believed that queer studies was a critical area of study on campus and also would serve as a gateway to social activism. She and several students, faculty, and staff met for months to design the minor package proposal. “There were all sorts of people who were envisioning this future at Cal Poly,” Lehr said.

One of those people was Steven Ruszczycky, assistant professor in the English Department. Ruszczycky got his Ph.D. in contemporary American literature but specialized in queer theory. When the possibility of developing a queer studies minor arrived, he was one of the first to jump on board. “A more visible institutional presence of queer studies was a very exciting idea to me,” he said.

The minor officially launched on October 4 with a large gathering in Robert E. Kennedy Library.

“I’m just hopeful that queer studies will be an important resource for people already involved in seeking to create a more just and equitable world and also will be able to invite other people, including more people who identify as straight allies, into this particular type of work,” Lehr said.

Ruszczycky will teach a queer disability studies course this winter and is thinking ahead to potential classes he could add to the curriculum. “Now that we have a minor on the books, we can start thinking about how we can expand,” he said.

Klepfer has high hopes for the program he helped instigate. “I think we really need support from donors and alumni to support the emergence of queer studies at Cal Poly, because it has so much to offer this university,” he said, “Queer studies can provide all Cal Poly students with a more critical mindset to navigate the world once they leave Cal Poly.”