During his first official at bat in Baggett Stadium, Brooks Lee couldn’t see the ball because of the tears in his eyes.

As he heard the crowd cheer, he realized he was fulfilling his lifelong dream of becoming a Mustang and playing baseball for his father, Coach Larry Lee. Months before this game, the shortstop was actually drafted by the San Francisco Giants after graduating high school, but Brooks turned it down to fulfill his commitment to Cal Poly.

At the plate, the gravity of the moment proved to be too much.

“I struck out in three pitches,” he recalled, now able to laugh about it. 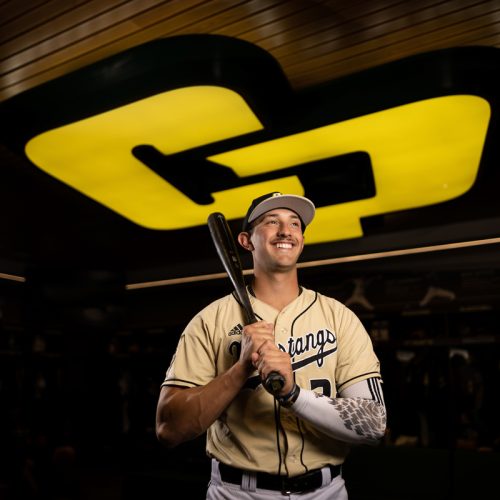 A lot has happened since that day. Brooks worked through multiple seasons mired in the pandemic, managed recovery from injury and surgery, and posted team- and conference-leading stats, including home runs and RBIs. The All-American has landed on nearly every list of the top collegiate field players in the United States. Now, he is making the most of his time as a Mustang before the Major League Baseball draft, where he is expected to be among the top prospects.

When Cal Poly Magazine caught up with him in March, there was a lot to reflect on.

“I’m probably in the most special situation out of anybody in college sports right now,” he said when asked about playing for his father. “I know that everywhere I play, I’m representing Cal Poly and representing the city of San Luis Obispo — and then the best part is representing the three letters of my last name.”

Brooks is the latest Lee to leave a mark on Cal Poly Athletics. His grandfather, Tom Lee, coached four sports during a legendary 36- year career, earning a spot in the university’s Hall of Fame. Larry Lee is in his 20th season as head coach for the Mustangs, notching a staggering 600 wins — the most of any Big West baseball coach. Coach Lee and his brothers, Terry and Mike, played professional baseball in the Giants organization.

“There are a lot of things that are kind of systematic in our family: we got the switch hitting, and you have to wear number 22,” Brooks said. 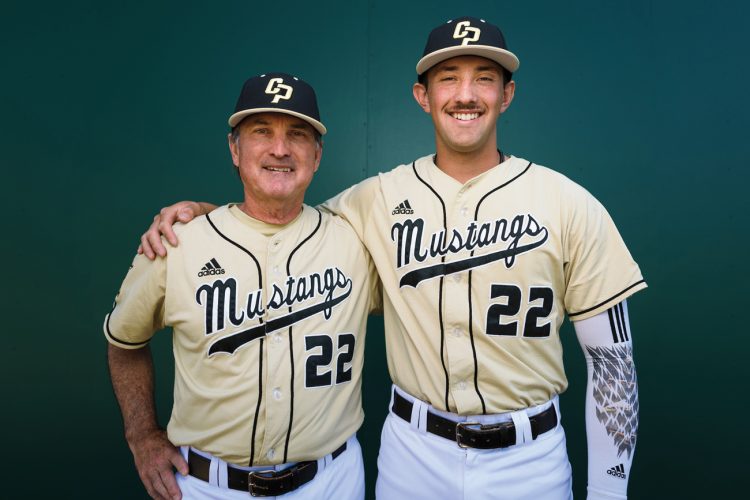 Those family traditions — and matching work ethic — were ingrained in Brooks early in life. His first memory of baseball was taking batting practice with his dad in the backyard, then watching his movements on video to make improvements. At the time, young Brooks didn’t comprehend all of Coach Lee’s direction. But decades later, Brooks still prepares for each game by analyzing film on opposing pitchers and perfecting his own form.

“I think that’s what’s helped me be successful in these few years I’ve been here — all that time that I’ve put into looking at my swing,” he said, acknowledging that switch hitting is especially rare today because it takes more time to train both left- and right- handed swings. “I really like to do it, so it’s not a chore for me.”

More time on the field has helped Brooks level up his technique, but he says his years as a Mustang have made him more prepared to go pro. The sociology major has emerged as a vocal leader who can motivate his teammates and knows how to handle himself off the field.

“I think that the time that I’ve had here has really changed a lot of things for me, but maturing was probably the biggest thing,” he said. “Obviously, it’s helped my game, but just being a good person, especially in the community, that’s what’s made the biggest difference.”

Coach Lee has seen the shortstop’s diligence pay off. He says it’s been a unique privilege to work with his son day in and day out as he prepares for a professional career. As their coach-player relationship nears its end, Coach Lee still marvels at Brooks’ unique combination of mental and physical talents. 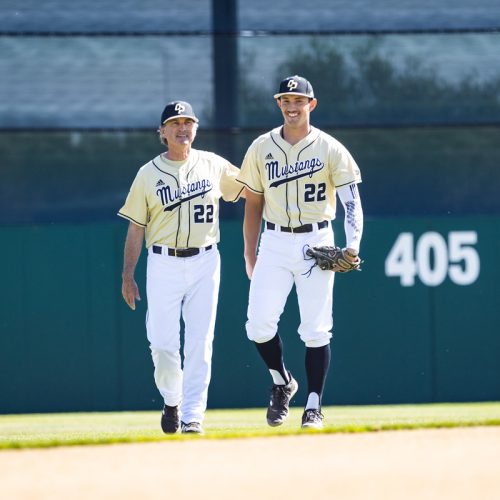 “In all of my years of coaching, I’ve never had a player who understands how his body works within the game as much as he does,” said Coach Lee. “I’m just trying to enjoy every moment we have together on the field.”

Memories like that first at bat will stay with Brooks forever, as will a few more successful trips to the plate. His face lit up when he recalled the home series against Cal State Fullerton in 2021 where he came up to bat with the bases loaded.

When the Titans brought in a left-handed pitcher — which is usually a more difficult match-up for left-handed hitters — Brooks turned around to bat from the right. A hanging slider was all he needed to crack a game-winning grand slam and take a celebratory trot around the bases.

Looking ahead, Brooks has a lot on his professional bucket list — first and foremost launching a long career in the major leagues.

“I’ve loved the game of baseball for my whole life and whether or not I liked it, I was probably gonna play it with the family that I grew up in,” Brooks admitted. “It’s given me a lot of opportunities and a plethora of other things in my life. I’m just excited to keep playing it for as long as I can.”

Mustangs in the Major Leagues

Outfielder Mitch Haniger has played for the Seattle Mariners the past five years, posting career-high stats in 2021. At Cal Poly, he was named Big West Field Player of the Year in 2012 and earned two All-American awards.

Southpaw pitcher Justin Bruihl, who played for Cal Poly in 2016, took the mound in his first season with the Los Angeles Dodgers last summer, holding opponents scoreless in 18 of 21 appearances.

Right-hander Spencer Howard has played with the Rangers and the Philadelphia Phillies during his first two years in the majors. Howard was an All-American and first-team All-Big West Conference honoree at Cal Poly in 2017.

Utility player Mark Mathias played with the Milwaukee Brewers but was sidelined during the 2021 season due to injury. He was Big West Field Player of the Year in 2014 and a two-time All- Big West first-team selection.

Jimmy Van Ostrand spent eight years in the minor leagues before becoming the mental skills coach for the Toronto Blue Jays. He previously competed for the Canadian national team, including in the 2008 Summer Olympics in Beijing. As a Mustang, Van Ostrand was a first-team All-Big West selection in 2006.