For the first time since 2019, the annual Design Village competition transformed Poly Canyon into a vibrant neighborhood swelling with innovative shelters and a few hundred creative Mustangs.

The event’s prompt is sparse yet demanding: design a structure, find materials, build it, transport everything by hand to the canyon, and inhabit the creation for 48 hours before recycling or repurposing it.

Now in its 47th year, Design Village is a rite of passage for first-year architecture and architectural engineering students. It marks their first project with a 1:1 scale and gives students the chance to step away from their computers.

“It’s so hands-on that I look forward to doing it every day,” said architecture student Arthur Yan. “This is the first project where we combine all our thoughts into one design.”

Close to 500 students participated this year — the most in recent history — including teams from community colleges and some second- and third-year architecture students who designed projects as part of their curriculum. Together, they built something transformative.

“Students make structures that are light, and this lightness does not claim territory or disturb the land,” said Professor Dale Clifford. “For a short period, the canyon becomes an impromptu cultural laboratory for the exchange of ideas and opens students to a wider experience of architecture.”

Don’t see the video above? Watch it on YouTube.

In early April, students and their instructors made the trek up to Poly Canyon to pick out their plots and envision their Design Village structures. Newly formed teams measured the slope of the land, assessed the plethora of gopher holes and noted the direction of the sun and the wind.

Though instructors urged students not to dwell on the overall form first, some couldn’t help imagining a bold concept. Students took inspiration from flowers, reptiles, sundials and even a cornucopia.

For some students, it was their first time in the canyon, which is home to the permanent installations of the Experimental Projects Lab. 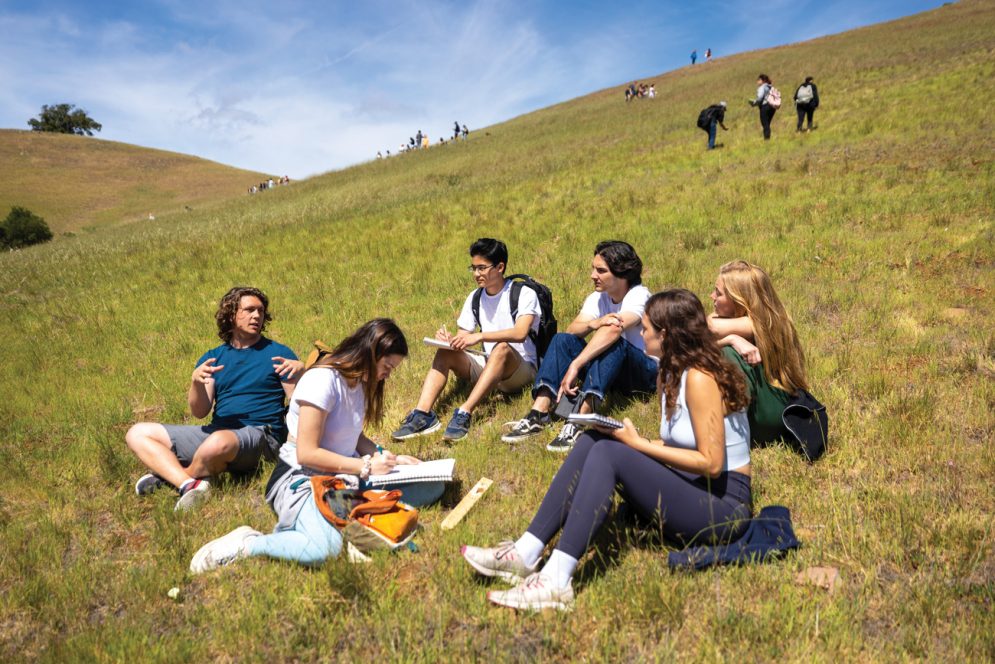 Michael Hards, left, and his team brainstormed ways their design could adapt to the slope of the hillside. 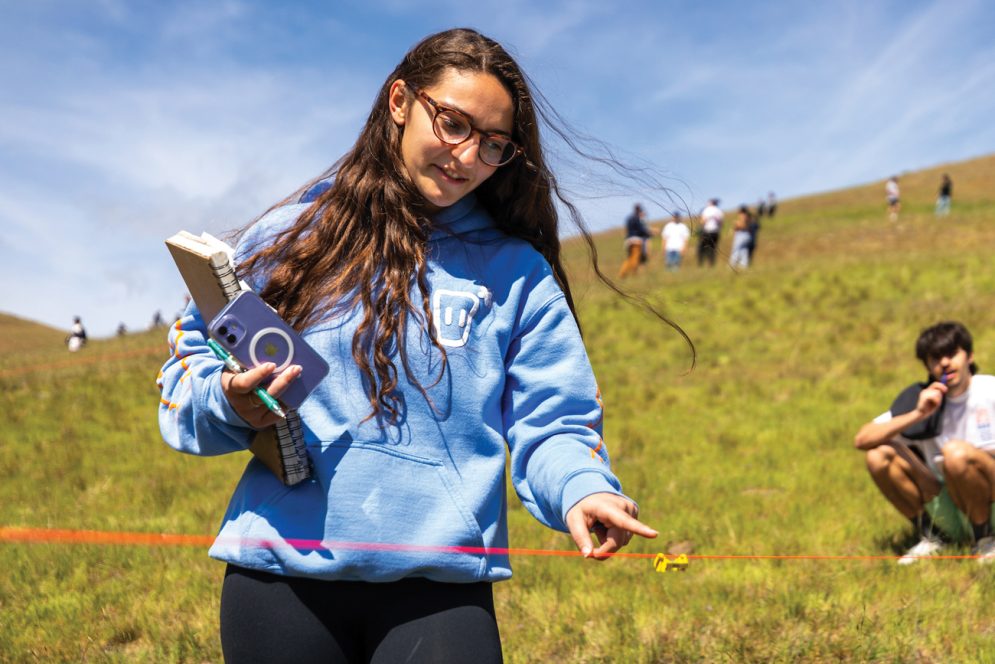 Sophia Klim measures the slope of her team’s plot using a line level. 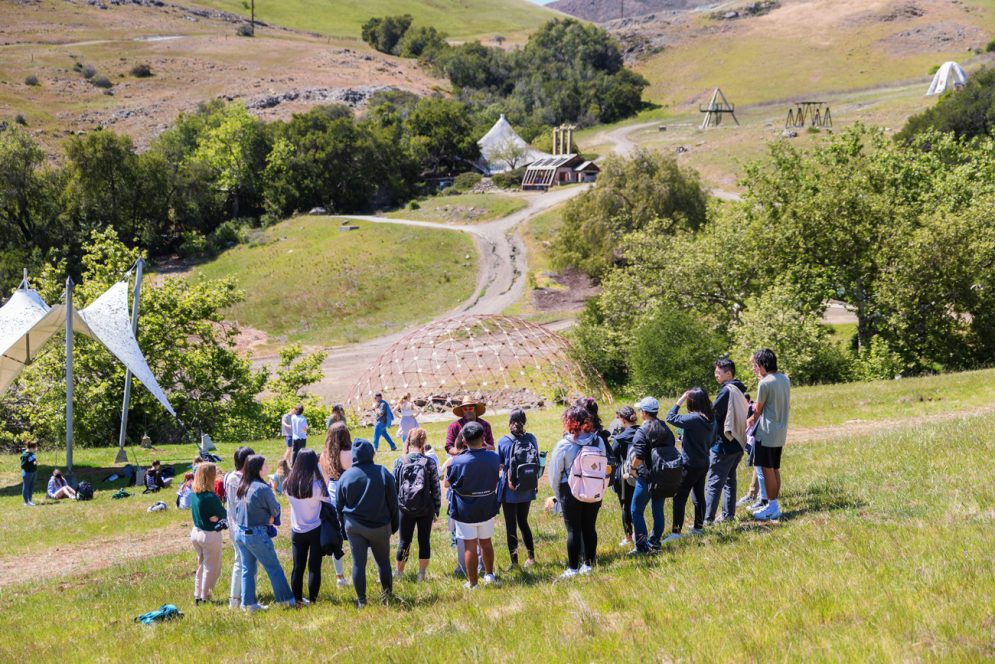 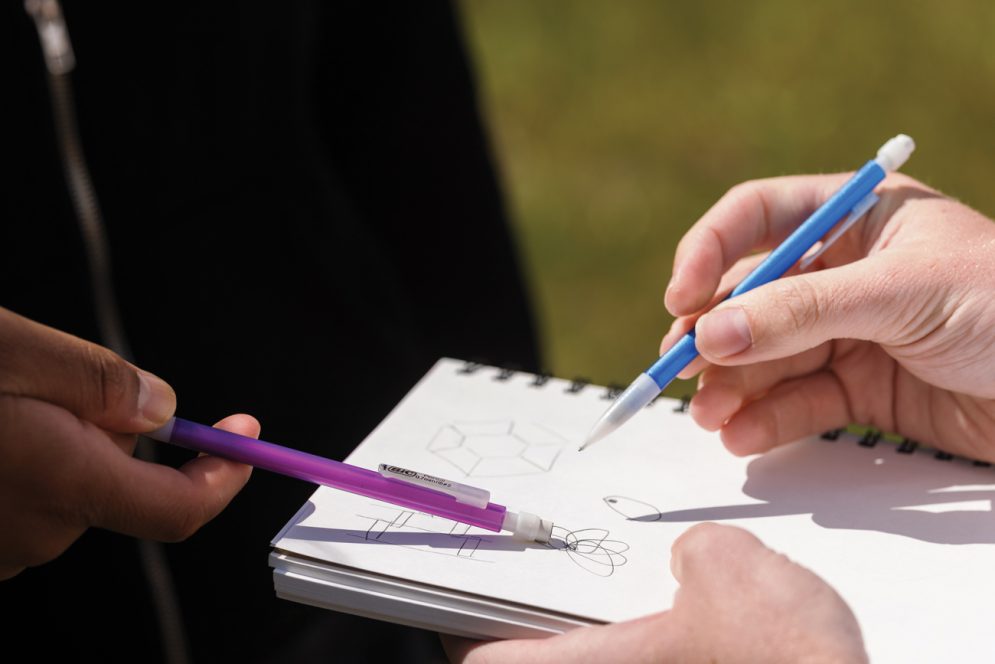 As soon as students measured their plots, they started sketching out their big ideas.

This year’s event theme, Eternal, challenged students to think about designing sustainably for the future, both in form and materials. Mustangs scoured campus and the community for free and recycled materials while supply chain woes put some construction supplies out of reach.

Teams flocked to the College of Architecture and Environmental Design’s Support Shop as they sharpened their skills in metalworking, fabrication, woodworking and 3D printing. Abby Casady diligently measures and marks on 60 feet of canvas that became the walls of her team’s structure. 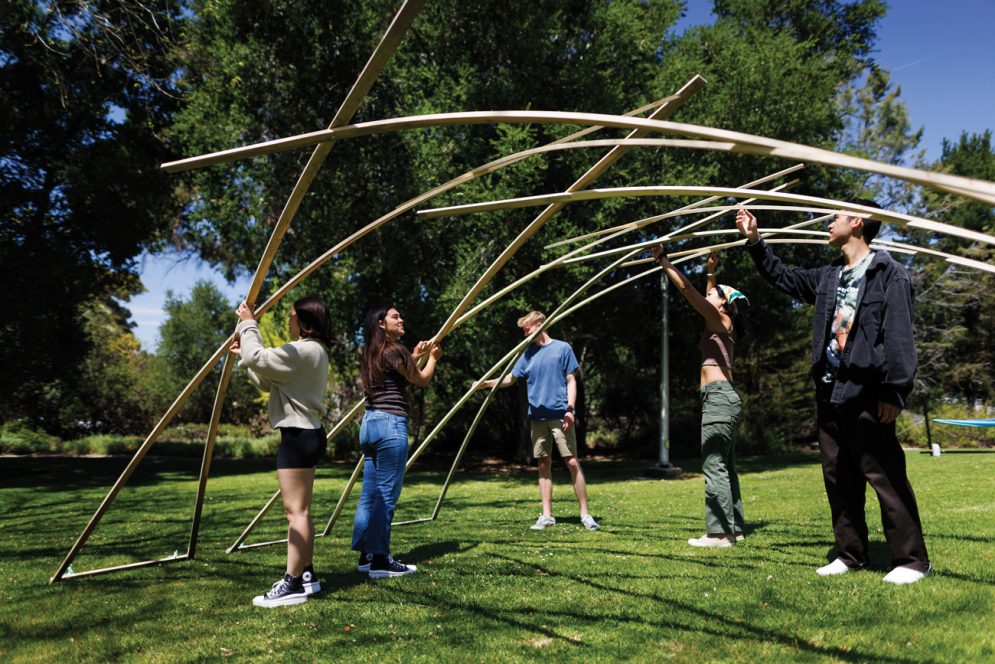 Alyssa Castano, second from left, and her second-year team upcycled tongue-and-groove floor boards to build the “Slither Inn.” The long slats mirrored the shape of a snake’s ribcage. 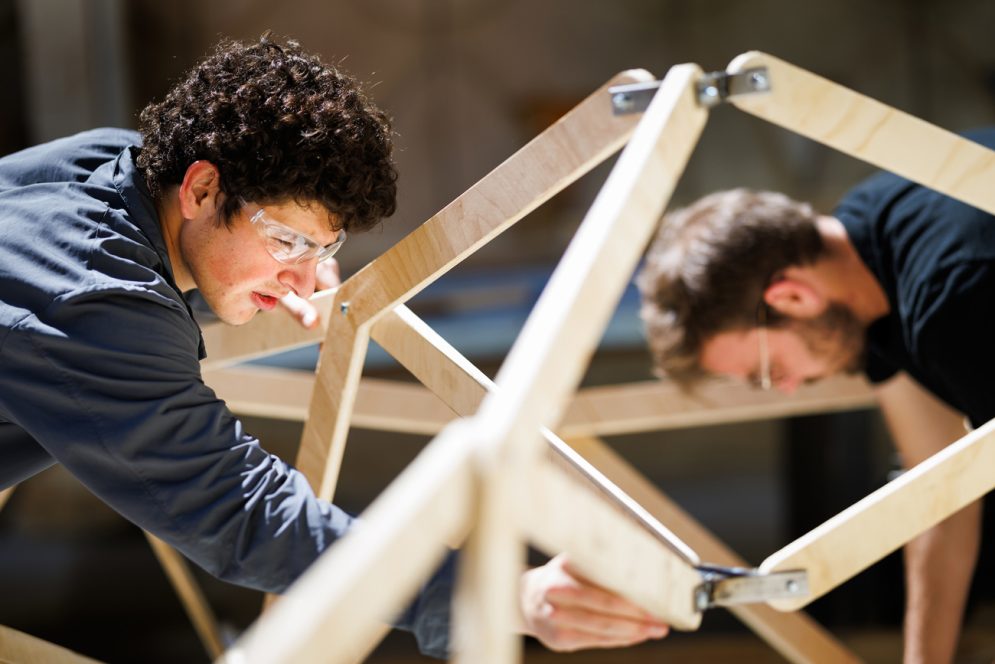 Lauti Perez-Blua and Garrett Kennedy tests connections of their structure in the CAED Support Shop. Days before the event, groups swarmed Dexter Lawn and O’Neill Green to put all their materials together one last time and work out the kinks. Some teams realized their structures physically couldn’t hold the weight of an adult. Small failures forced many teams to iterate their designs into something better.

First-year student Marjaan Simab said her team’s design evolved from a flower to a staircase to a beehive, and finally to a pair of houses that could sleep three people each. The twists and turns — and sleepless nights — taught her some valuable lessons.

“Concepts in theory and in real life are two very different things,” she said. 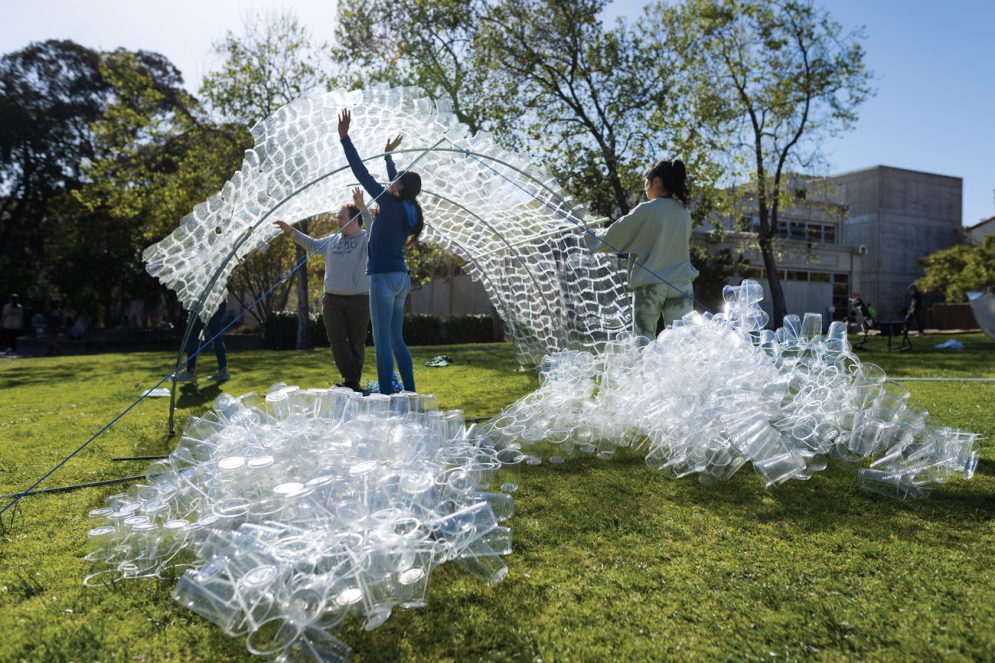 Ben Sacco, Tanya Vargas and Amber Ngo test their structure’s cover, made from plastic cups donated by a local brewery then ironed into sheets. 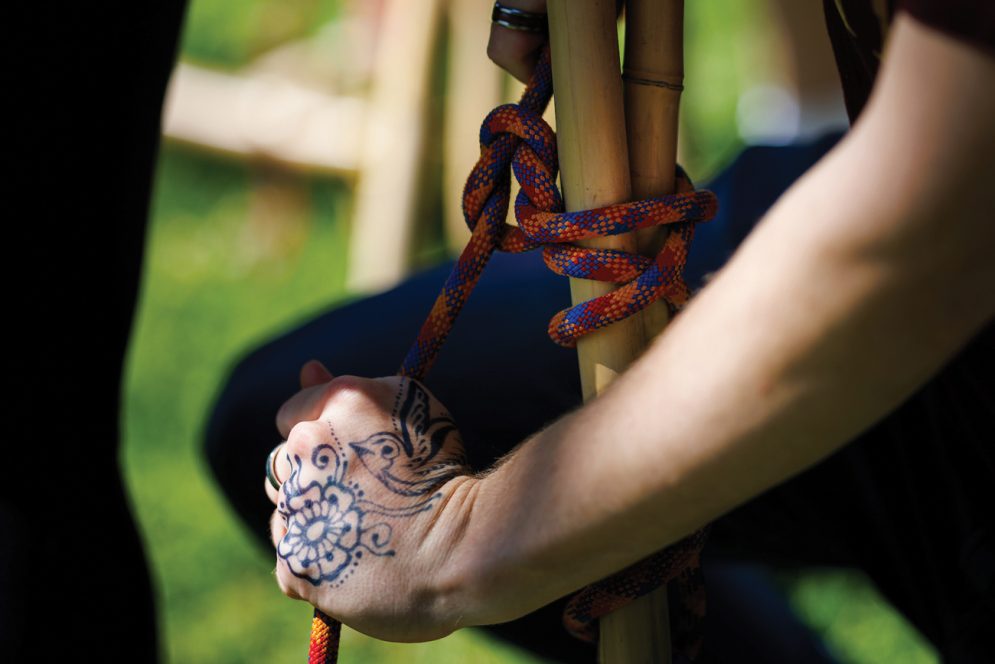 Students experimented with different connection methods, from hardware to rope, to bring their designs to life. 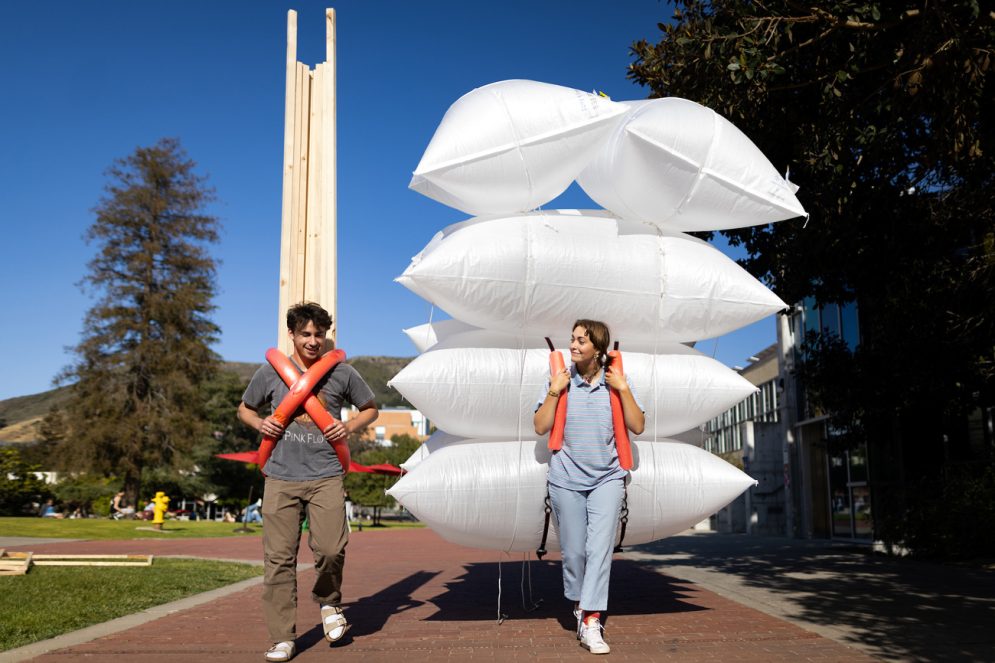 The reality of transporting an entire structure more than a mile to Poly Canyon provided a healthy check on each participant’s wildest design ambitions. Some teams opted to move structures that were mostly intact; some broke things down to various states of assembly with improvised harnesses and wheels. Teamwork — and a good playlist — seemed to ease the journey.

Once in the canyon, students made one last push up the steep hillsides to find their plots and put the finishing touches on their projects using hand tools.

“The long hours are worth it,” said Arthur Yan of the Slither Inn team. 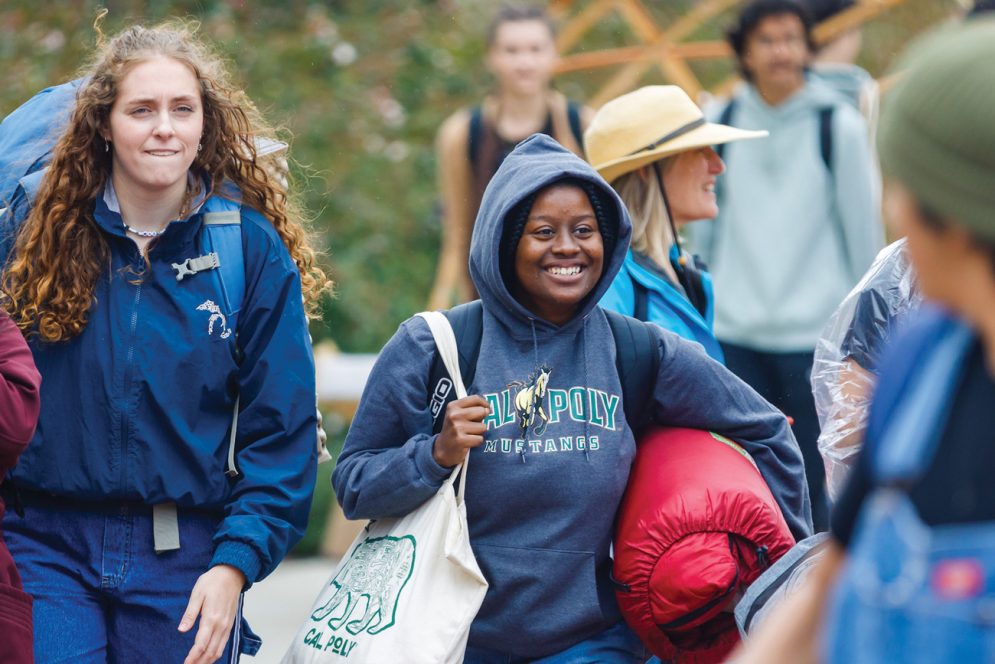 Sophia Hensel, left, and Spencer Rosner of the team Cloud Fünf resist the wind while hauling inflated dunnage bags and posts up the steep hills of Poly Canyon. Through faculty judging, public tours of the structures and two chilly nights in the canyon, the atmosphere in the village was one of collaboration. Students shared tools and supplies as they installed — and continuously repaired — their structures.

As the sun went down, a festival full of food, music and lights emerged. Students roamed from structure to structure, talking about their process and enjoying the spectacle of their hard work on display.

Third-year architecture student Robert Heckey said this project helped him rediscover his passion for building and teamwork outside of the studio.

“You have the capacity to do so much more than you thought you could just because you’re enjoying it so much,” he said. Once in the canyon, Samhita Vallamreddy, left, and Samantha Almoney, right, of Team Cow-Chella refine their structure using hand tools. Abby Casady, Bennet Herbolsheimer and Nicole Cheng assemble “Content Captive.” The team fed wires through the canvas to make it look like it was alive in the cage. 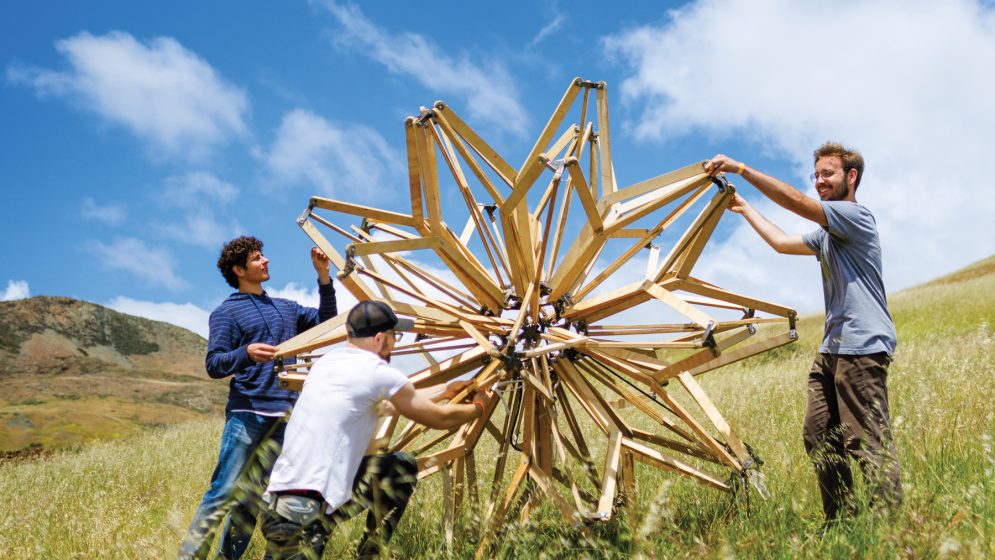 The teams in the second-year architecture studio taught by Kelle Brooks collaborated on a neighborhood of structures that were thought of as slices of a house with each one serving different domestic activities like entertainment and dining. Once the sun went down, many students lit up their structures as they enjoyed the community of Design Village, buzzing with creative energy.

Find out more about this year’s competition winners on the Cal Poly News website.