Before the term climate change was common, many people knew it as “global warming:” increases in average air temperature due to greenhouse gases. But it goes much further than a few degrees on a thermometer. When it comes to the air, it’s everywhere.

Globally, CO₂ emissions have increased by 90% in the last 50 years, due mostly to fossil fuel combustion, industrial processes and agriculture. In turn, the atmosphere has doled out some of the most visible symptoms of climate change: volatile weather, hazardous air quality and consistently spiking temperatures that have made some places unlivable. Those emissions have also fueled lasting chain reactions in the Earth’s ecosystems that go beyond national borders.

But there is good news. The United States is emitting less CO₂ overall than it did 30 years ago. At Cal Poly, students and faculty continue to lead the way, from studying renewable energy technology displacing fossil fuels to developing materials that scrub pollution from the air.

In this second installment of our series on climate change, meet the scientists and researchers tackling the issue in the atmosphere. 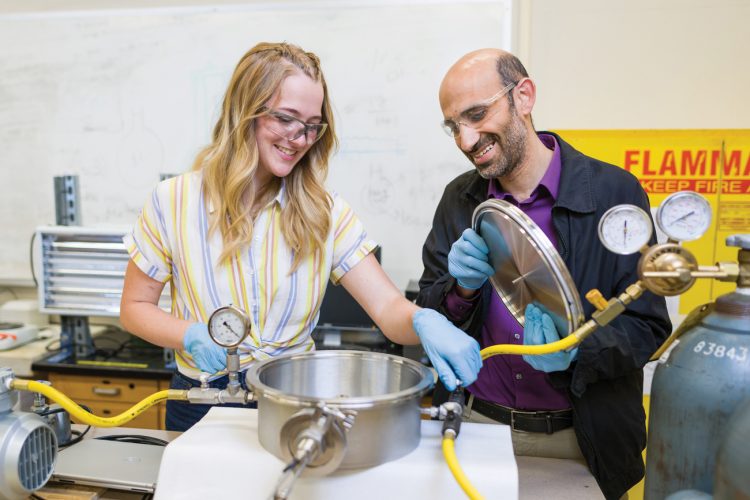 There is no silver bullet to solve climate change, but civil and environmental engineering Professor Amro El Badawy says carbon capture is an important piece of the puzzle. To get to net zero by 2050, experts estimate carbon capture technology would be responsible for neutralizing 15-20% of all emissions. The Biden Administration’s infrastructure bill earmarked billions for carbon sequestration development.

“We share one atmosphere, meaning there is no one country that can solve this,” El Badawy said of the urgency to proliferate sustainable, low-cost tools to capture CO₂. “It has to be an effort by every country.”

He is part of a coalition of faculty and students exploring different combinations of materials that can attract carbon molecules and either utilize or store them. Such technology could help filter major emissions sources, like exhaust stacks at a power plant. 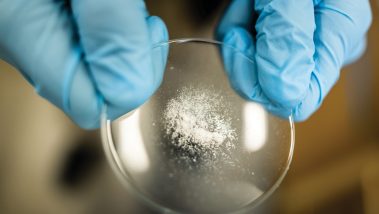 The MOF material appears similar to cornstarch, but it contains hundreds of meters of surface area per gram. Photo by Joe Johnston.

El Badawy is leveraging his expertise in nanotechnology to examine the use of a new generation of materials called metal organic frameworks, or MOFs. The material itself looks like cornstarch or fine sand. MOFs are made up of microscopic tunnels that actually have hundreds of square meters of surface area per gram of material, meaning there is plenty of room to trap carbon molecules. The goal is to develop more selective and efficient material compared to solutions on the market now, such as liquid scrubbers and activated carbon.

“You have a nice crystal structure of metal nodes and linkage that are organic,” said El Badawy, explaining that the metals include potassium and calcium. “I’m working with something that is not toxic, not hazardous. It’s almost like an edible material.”

Corinne Watson, a second-year environmental engineering student, has been leading the research into a gamma cyclodextrin MOF. In the lab, she uses a custom-built piece of equipment constructed by recent graduate Dustin Lee (M.S. Civil and Environmental Engineering ’20) that uses a quartz crystal and a vacuum system to test how much CO₂ a material can collect from the air. 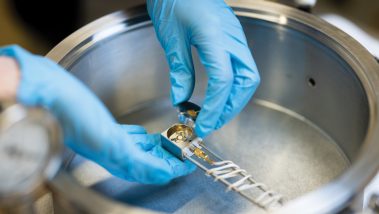 The custom-built vacuum system uses a quartz crystal to test how much carbon dioxide is captured from the air. Photo by Joe Johnston.

“I’ve never been so inspired by something in my life,” said Watson, who was preparing to speak at her second academic conference about her research. “Being able to work on a project hands-on and do the whole entire research process, it’s very exciting.”

She has helped test ways to refine the material’s pore size using a selective polymer coating, called polyethyleneimine, that can cover all the MOF’s tunnel surfaces. The coating not only shrinks the diameter of the tunnels — so molecules are closer to a surface they can latch on to — it also selectively attracts CO₂ as opposed to other gases.

Faculty collaboration helped move the project along significantly. Mohsen Kivy of the Materials Engineering Department helped the team simulate the molecular interaction and docking process, while Ajay Kathuria of the Industrial Technology and Packaging Area performed the characterization of the MOFs.

Now, Watson and El Badawy are testing different molecular weights of the polymer, linear and branched arrangements in the material, and impregnation methods as they get closer to the right combination that pulls the most CO₂ possible from exhaust gases. Their findings will go into an academic paper they are writing together.

In El Badawy’s mind, the real challenge isn’t just about technology. He says there are feasible solutions in carbon capture and climate change technology on the market now, but people need more economic incentives to use them.

“It needs policy and politics more than technology at this point.” 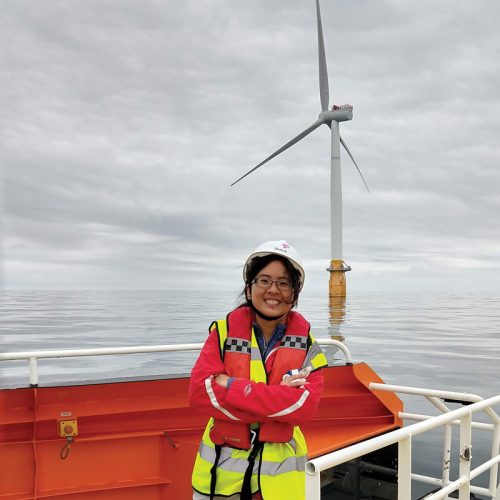 In May 2021, the federal government opened some waters off the Central Coast and near Humboldt County to the development of floating wind turbines. A floating wind farm in these areas could power about one million homes with renewable electricity, a crucial step in mitigating climate change. A Cal Poly research team has been studying the potential of offshore wind power in the area for years.

One of the challenges of moving to fully renewable energy is matching the time of production to the time when demand is high. Solar power generation peaks in the middle of the day. Consumer demand, on the other hand, often peaks in the evening when people return from work, and large-scale storage of solar energy is not yet practical.

The Cal Poly researchers found that offshore winds are strongest when demand is greatest, making it an ideal candidate to fill the gap left by decreases in solar and onshore wind energy production around those times.

The researchers are also exploring ways to maximize this carbon-free power production while minimizing impacts on marine ecosystems, the fishing industry and other users of ocean space.

“Our ongoing work aims to analyze a variety of data and identify places that are likely to have greater potential wind power production and lesser effects on other users of ocean space, such as fisheries, seabirds, marine mammals and others,” White said.

The initial analysis of federal and state data shows that fishing activity for groundfish, a commercially important group of species, appears to be relatively low in the federally designated Wind Energy Area off the Central Coast, but may be higher near Humboldt Bay. The research team will also analyze data on whale migration routes, the prevalence of sea birds and other environmental factors. European offshore wind installations collect very little information on such a variety of environmental impacts, meaning this team’s analysis could inform large-scale projects on the horizon, including a 380-turbine project off the coast of Morro Bay proposed in the next decade.

The possibilities of offshore wind production come with resistance, including efforts to designate some coastal waters off Santa Barbara and San Luis Obispo counties as a Chumash Heritage National Marine Sanctuary to protect tribal heritage and biodiversity. The proposal, which spans 7,600 square miles, is under consideration. A new project proposing four 330-foot-tall floating turbines less than three miles off the Central Coast — yielding power and more environmental impact data — falls within those boundaries.

The Cal Poly research team has remained neutral, loyal to the data that will help find the best solution for all stakeholders.

“It’s so important that all the involved parties are using the scientific evidence to guide this development, and so far, we’re optimistic that offshore wind can contribute to a sustainable future in energy production in California,” Ruttenberg said. 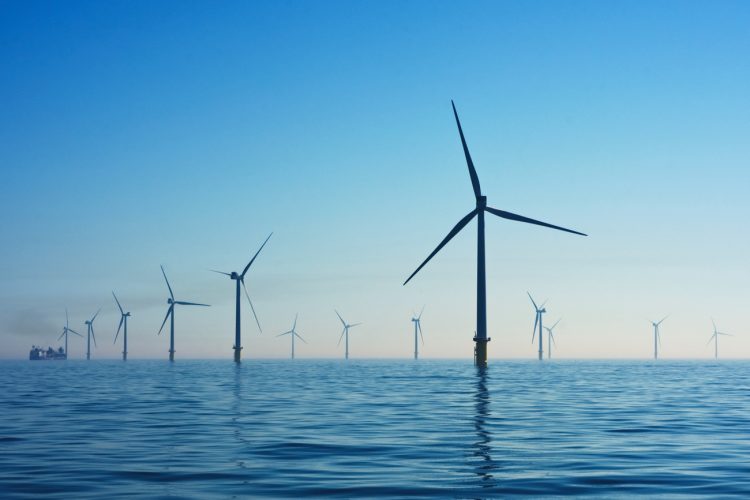 Economics professor Steve Hamilton has thought a lot about the economic value of wind, specifically the value of implementing an offshore wind farm along the coast of San Luis Obispo County. He found it could create numerous jobs and serve as an effective, renewable source of energy for the area.

“Wind energy has the potential to be a huge part of California’s power supply in the future,” said Hamilton, who began investigating offshore wind economics five years ago.

He estimates that a 100-windmill farm off the coast of Morro Bay would have the capacity to produce about 1 gigawatt of power, which is equal to more than the amount of energy 1,200 land windmills would produce. A project scaled to produce up to 7 gigawatts could power millions of homes — and also create thousands of jobs across the state.

Hamilton, along with co-author and finance professor Cyrus Ramezani, developed predictive supply chain models with economics student Ben Stephan and recent graduate Christopher Almacen (M.S. Quantitative Economics, ‘21). They found that if a 1-gigawatt wind farm became a reality, the state could add more than 11,000 jobs across coastal counties like San Luis Obispo during a 35-year stretch of offshore wind farm planning, assembly and 25 years of operations. The overall economic impact is forecasted above $3.7 billion, tallying potential local spending on labor, materials and services independent of the energy created. 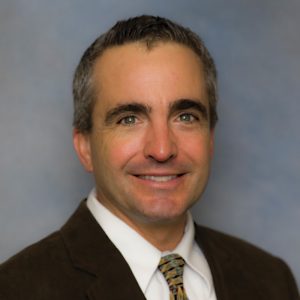 “Offshore wind power is a really interesting subject because it just has so many benefits — from creating hundreds of jobs to saving the environment,” Stephan said. “It really is the future of sustainable energy, and it’s awesome to think that small towns like San Luis Obispo can play such a huge role in that transition.”

Hamilton says he believes an installation would be a beneficial investment even though the payback time to cover its significant upfront costs would be long. But there is an upside: Hamilton says the investment would more than offset the loss of tax revenue from the closure of Diablo Canyon Power Plant, which is set to go offline in 2024.

“The economics are really interesting because it’s a massive investment upfront and then these things just quietly spin energy into power, off the coast,” Hamilton said. “Every day it’s producing energy, and there’s not a lot of marginal cost.”

That vision hinges upon constructing a small, specialized costal port to fix malfunctioning turbines quickly, knowing the technology isn’t advanced enough for a floating port to perform maintenance miles off the coast. That construction project would create even more sustainable jobs in on the Central Coast.

“Offshore wind power would be immensely scalable on the Central Coast with a specialized offshore wind port somewhere between Port Conception and Monterey,” said Hamilton. He said the potential to locate a small, specialized wind port at the Diablo Canyon Power Plant property has considerable appeal as a brownfield development site. “The infrastructure is already there for landing offshore wind power and delivering it to California’s electricity grid.”

The research team hopes their findings will continue to inform policymakers about the potential for wind energy in the Golden State. Until a specialized wind port becomes a reality, Hamilton says large-scale offshore wind energy development off the central coast could be delayed a little longer — perhaps until the year 2040 — before coastal communities feel the lift from this potential economic breeze.

Read the first installment of Our Climate Future, where Cal Poly Magazine looked at climate science related to Earth.