A Leap of Faith

During the Open House Parade, AJ Kinsella-Johnson wowed the crowd while jumping over a pair of brave volunteers from the Unicycling Club. This was the first time Open House held in-person events since 2019, welcoming thousands of future Mustangs, parents and community members to campus. 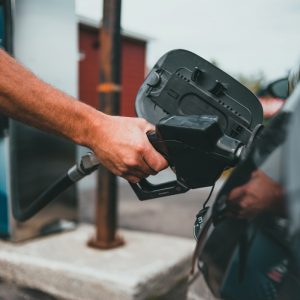 Pain at the Pump

With gas prices at a record high going into the summer — above $5.50 on average in California — we asked Professor Hamed Ghoddusi, who studies the economics of energy and commodity markets, what factors are causing the spike — and what consumers can do about it.

What has been driving the intense increase in gas prices over the last few weeks?

The price of crude oil has jumped to $110 per barrel, which is not unprecedented. But what’s also rising, which might be hidden to consumers, is what’s known as “crack spread,” the markup for refining gas. That’s usually around $7-10 per barrel. I’m currently calculating that markup at $28 per barrel. That’s because natural gas is used in oil refining, and the price of natural gas has also gone up. All together, the cost of refining has almost doubled compared to last year.

This is all coinciding with the Russian invasion of Ukraine. Is that a factor?

It’s a causal factor, absolutely. Some countries put an embargo on both natural gas and crude oil from Russia, which is adding friction to the markets. Russia is a major producer — about 10% of the global market. If you cut even a little bit from the supply, prices will go up significantly. Regular price fluctuations are usually short-lived, because the root cause is usually a temporary thing — a burst in a pipeline somewhere, a problem at a refinery, a blizzard. The difference now is
that we have what’s called a “structural shock,” a real supply deficit due to the ongoing war. And even if the war stops right now, rebuilding the global supply will take time.

What are some things that governments can do right now to help relieve the pressure on consumers?

In some countries, a big proportion of the pump price comes from the taxes that the government levies. In California, those taxes are higher compared to the rest of the U.S. Governments may try to reduce those taxes temporarily. The U.S. government also has hundreds of millions of barrels in the national strategic reserves, and they have decided to bring some of that back to the market. We can work with other oil-producing countries and encourage them to try to increase the supply.
All of these maneuvers may help the supply get to consumers more efficiently, but at the end, the problem is the real supply shortage.

Is there anything consumers themselves can do in the meantime?

Of course, anything that reduces consumption is helpful. Less driving, more public transportation, cycling, carpooling or using smaller, more efficient vehicles wherever possible. During COVID we found that more people working from home reduced somewhere in the order of half a million barrels of gasoline consumption in the U.S. But those solutions may not be at the disposal of everybody. In the meantime, trying to eliminate unnecessary trips can shave a little bit of demand at the consumer level.

Read an extended version of this interview at calpoly.edu/news. 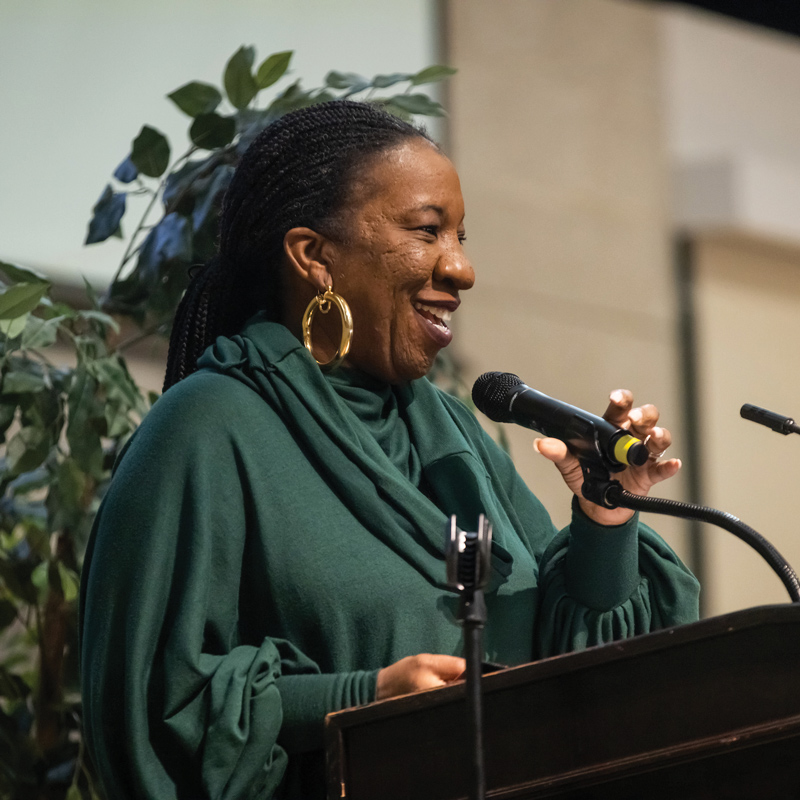 As long as we think of sexual violence as an individual issue, we will never see an end to this epidemic. This is a community issue, and community problems deserve a community response.

— Tarana Burke, founder of the MeToo movement. Burke spoke at Cal Poly in April at an event commemorating Sexual Assault Awareness Month and the 25th anniversary of Safer, the university’s resource for addressing sexual assault and intimate partner violence. 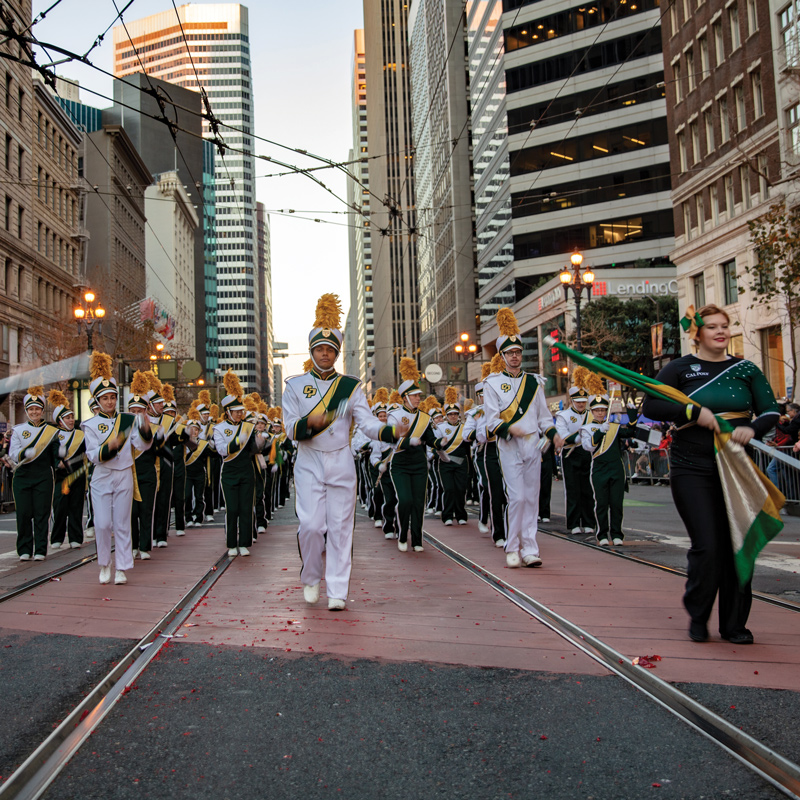 As fireworks popped and crowds cheered, Cal Poly’s Mustang Band and the university’s cheer and dance teams marched among brightly colored floats and dragon dancers as they helped celebrate the Year of the Tiger at the Alaska Airlines Chinese New Year Parade in San Francisco. The parade, which returned on Feb. 19 after a pandemic hiatus in 2021, marks the marching band’s seventh time participating in the Lunar New Year celebration. 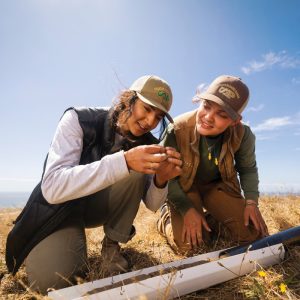 Students from four of Cal Poly’s six colleges were awarded funding, and for many, the projects will serve as part of their senior projects or master’s theses.

Colby Scanlon, a student in the blended civil and environmental engineering program, is using his funding to further test designs for his master’s thesis on creating origami-inspired deployable disaster relief shelters. He plans to present his findings at the Cal Poly Pomona Civil Engineering Conference.

“I’ve been working on this project with students in both my master’s and undergraduate programs, and I’m looking forward to staying connected with them on this project after I graduate in June,” said Scanlon, who will earn both his bachelor’s and master’s degrees.“It’s exciting to get support for this project as we look for new ways to create shelter when people need it most.”

Because the Baker and Koob endowments have similar purposes, their distributions are pooled and used to fund multiple student projects via a competitive process.

The funds help students cover travel costs, equipment and materials, and access to educational conferences and competitions, among other expenses.

“The Baker/Koob endowments provide a great opportunity for students to take the lead in research projects and to get involved with ongoing faculty research,” said Dena Grossenbacher, assistant professor in the Biological Sciences Department, who has served as an advisor on several Baker/Koob projects. Those projects focused on the impacts of recent climate change on alpine plants in California national parks.

“Thanks to this funding, my students have been able to travel across the state identifying plants that hadn’t been relocated since the 1980s.” 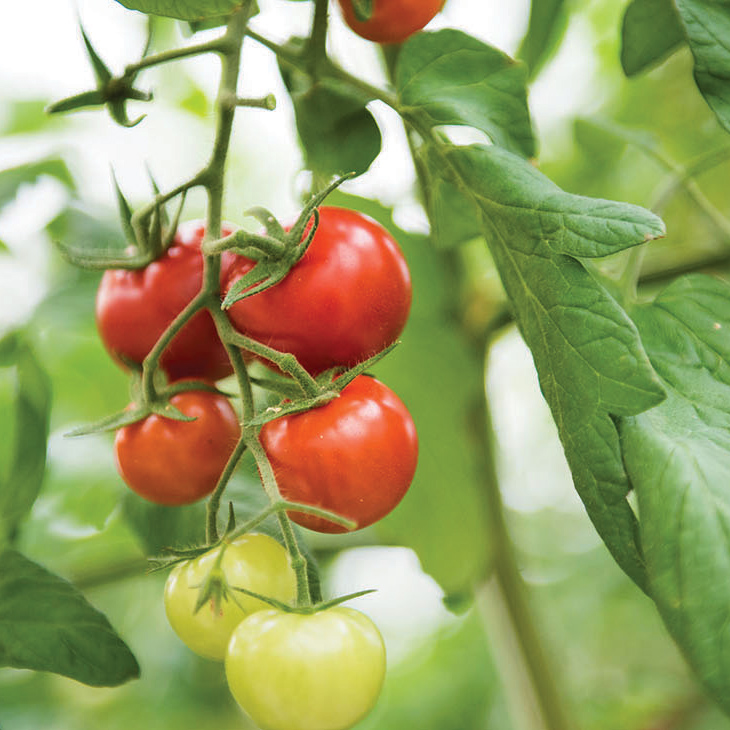 “Being a part of the Tomato Spectacular student-run enterprise has enabled me to gain firsthand experience with growing a crop commercially for sale in a production setting,” said Ryan Schrader, a fourth-year agricultural and environmental plant sciences major. “Everything from cleaning pots to how to set up the sale has been done by our fantastic team of five hardworking students. I’m so excited to share with everyone the tomato fruits of our labor these past few months.”