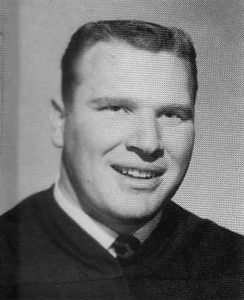 “You would be hard-pressed to find someone who has meant more to the sport of football than John Madden,” said Cal Poly Director of Athletics Don Oberhelman. “As a former player and alumnus, his support and involvement in our football program has meant the world to all of us at Cal Poly.”

Madden was an offensive and defensive lineman for Cal Poly football and a Cal Poly baseball player in 1958 and 1959. He began his coaching career at Hancock College in Santa Maria and ended it with the Oakland Raiders, who he led to a Super Bowl title. 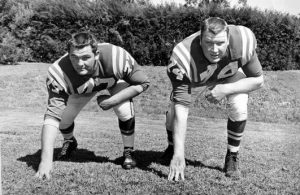 In 1979, he retired from coaching and became an announcer, winning 16 Emmy Awards for outstanding sports analyst/personality and covering 11 Super Bowls. Along the way, he was a major fundraiser for Cal Poly Athletics programs in the 1980s and involved in the university’s 1991 Athletics referendum, which ultimately led to the Mustangs’ elevation to NCAA Division I status in 1994.

Madden was inducted into the Pro Football Hall of Fame and California Hall of Fame, among others, and was a charter member of the Cal Poly Athletics Hall of Fame. He is survived by his wife of 62 years, Virginia (M.A. Education ’61), two sons and five grandchildren.

Look for more on the Madden family’s legacy in a future issue of Cal Poly Magazine.