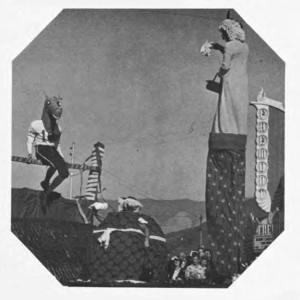 For nearly a century, the Mustang has been a symbol of Cal Poly. But even the most devoted alumnus might be surprised by some of the facts that University Archives dug up about the history of Cal Poly’s mascot.

Here come the Cal Poly …. Mules?
Cal Poly students selected the school mascot by vote in the fall of 1925 as part of the process of designing a school flag donated by the American Legion. The final two choices were the Mustangs and the Mules, and while the Mustangs won the majority of votes, the junior sports teams were known as the Mules into the 1940s.

Ride High, You Mustangs
The Mustang mascot was immortalized in 1947 with the Cal Poly fight song “Ride High, You Mustangs,” written by Director of Music H. P. Davidson. Beyond the well-known opening lines, the rest of the song’s lyrics are based on old cowboy lingo — such as “burn the breeze” and “kick the frost out” (move fast), “chin the moon” (get excited), and “cut a rusty” (cause mischief).

Suiting up
In 1949, the Rally Club constructed a campus mascot costume consisting of a papier mâché horse head with a metal frame, worn over athletic gear. It was a very different vibe from today’s plush suit, the first version of which was purchased in 1981 with help from Athletics, the Alumni Association and Associated Students Inc.

Poly Prince, a live mascot
In 1954 the Boots and Spurs club bought the college its first live mascot: a thoroughbred named Poly Prince. Even though Poly Prince wasn’t technically a mustang, “the present papier mâché horsy … just can’t compare with the real thing,” the club said in a campus announcement.

A Mustang by any other name
As early as 1962, students began referring informally to the mascot as “Musty,” sometimes spelled “Musti.” No one knows who started the name, but by 1984 it had come into standard use by campus institutions like the student newspaper.

Mrs. Musty
The archivists were surprised to find that Musty briefly had a wife! “Misty” was mentioned in student newspapers between 1962 and 1965. The couple was apparently official enough that students at rival Fresno State made a pact in 1965 to not steal Musty and Misty during the football season.

Chase, the live mustang
In 2014, Cal Poly received an actual live mustang mascot as a gift from alumnus Robin Baggett (Business Administration ’73), and his wife, Michelle. The live mascot was ceremonially named Chase, after former Cal Poly president Margaret Chase, and was the first member of a Mustang Herd that would serve the university, boost school spirit, and provide learning opportunities for students working with America’s wild horses.