This unusual spring quarter at Cal Poly has had us all missing campus — the places, the faces, the bustling activities that took place both inside and outside the classrooms.

Since we can’t be there now, we wanted to take a look back at the last quarter on campus: winter, when the sun goes down early but the action stays up late. Cal Poly photographer Joe Johnston captured some slices of the university’s night life — from club activities and social scenes to the Learn by Doing opportunities that happen between dusk and dawn.

The Beauty of Teamwork 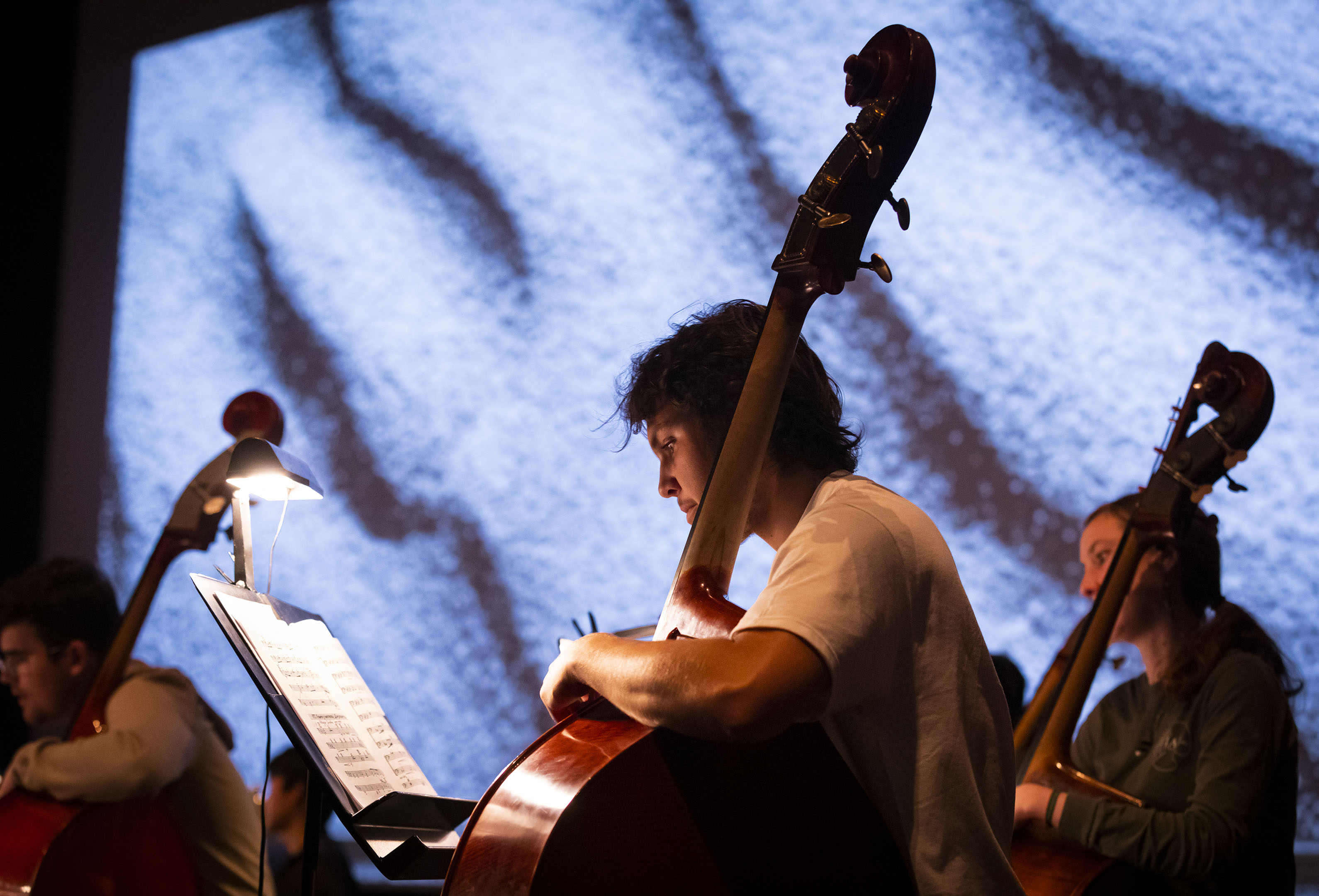 In December, the Cal Poly Symphony came together with students from the Art and Design and Liberal Arts and Engineering Studies programs to present “Teamwork.” an immersive multimedia experience at the Performing Arts Center. 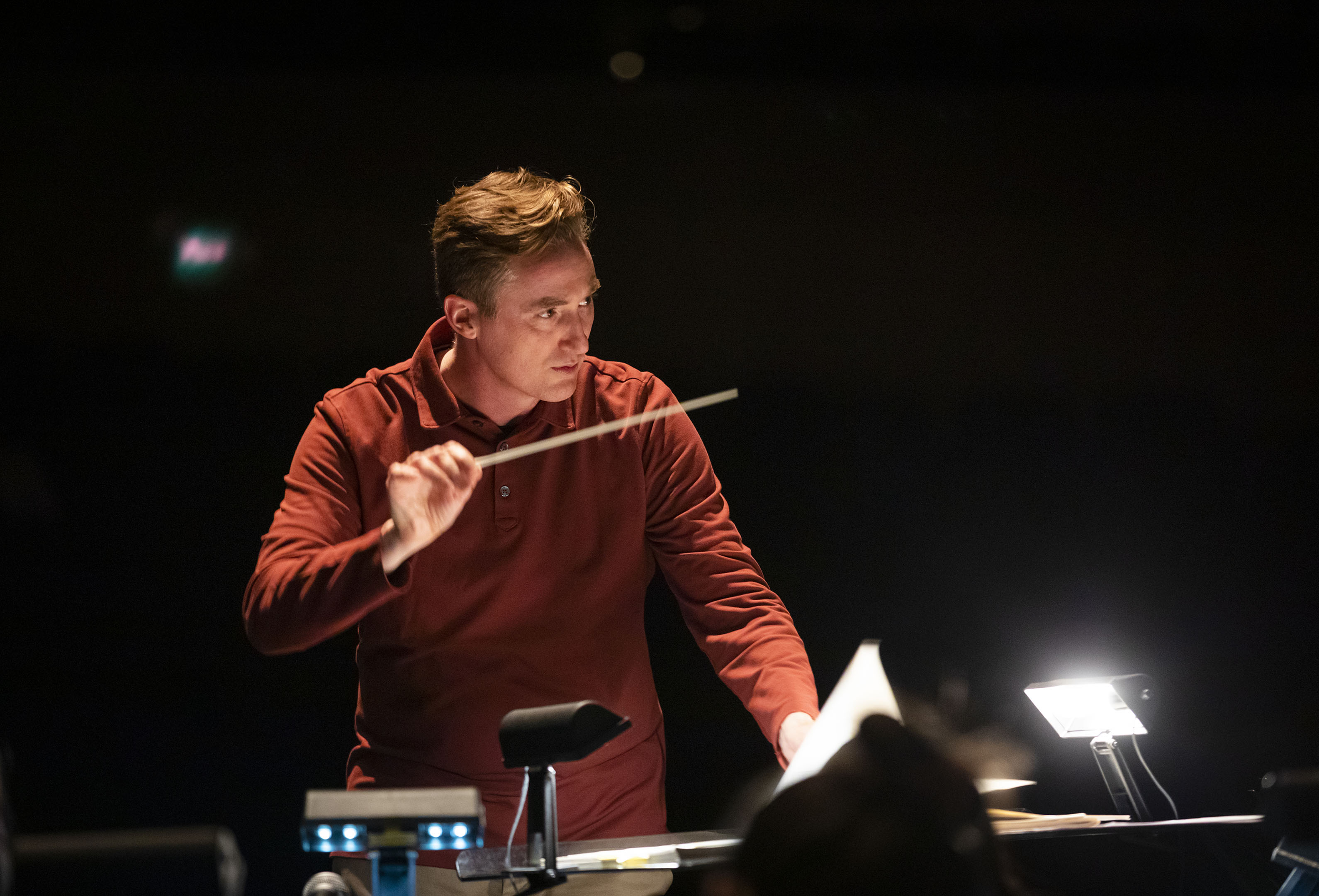 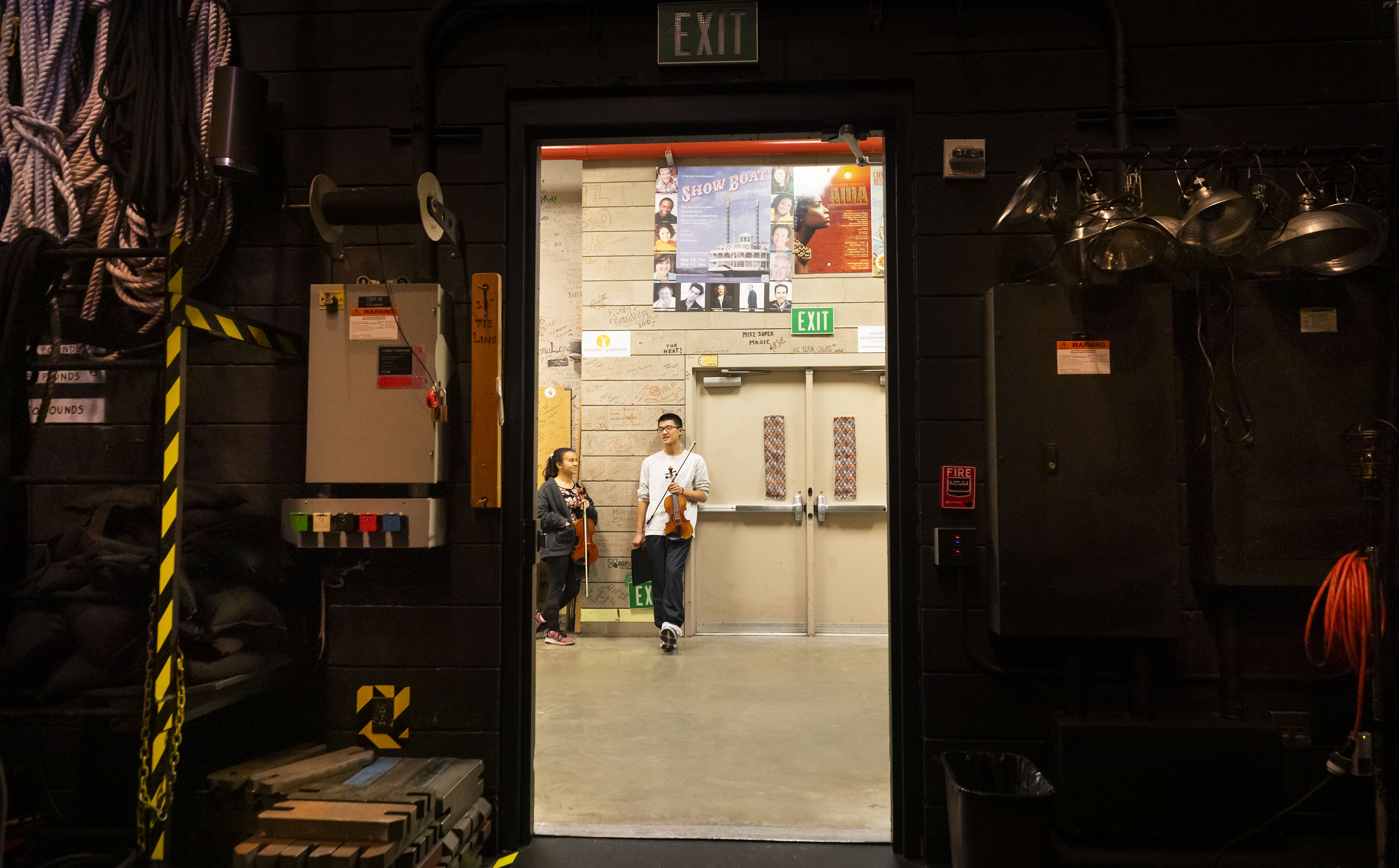 The show was designed to showcase the range of collaboration only possible in Cal Poly’s Learn by Doing environment. The unique performance paired the music with digital visual projections created by Art and Design students under the direction of Professor Sky Bergman. 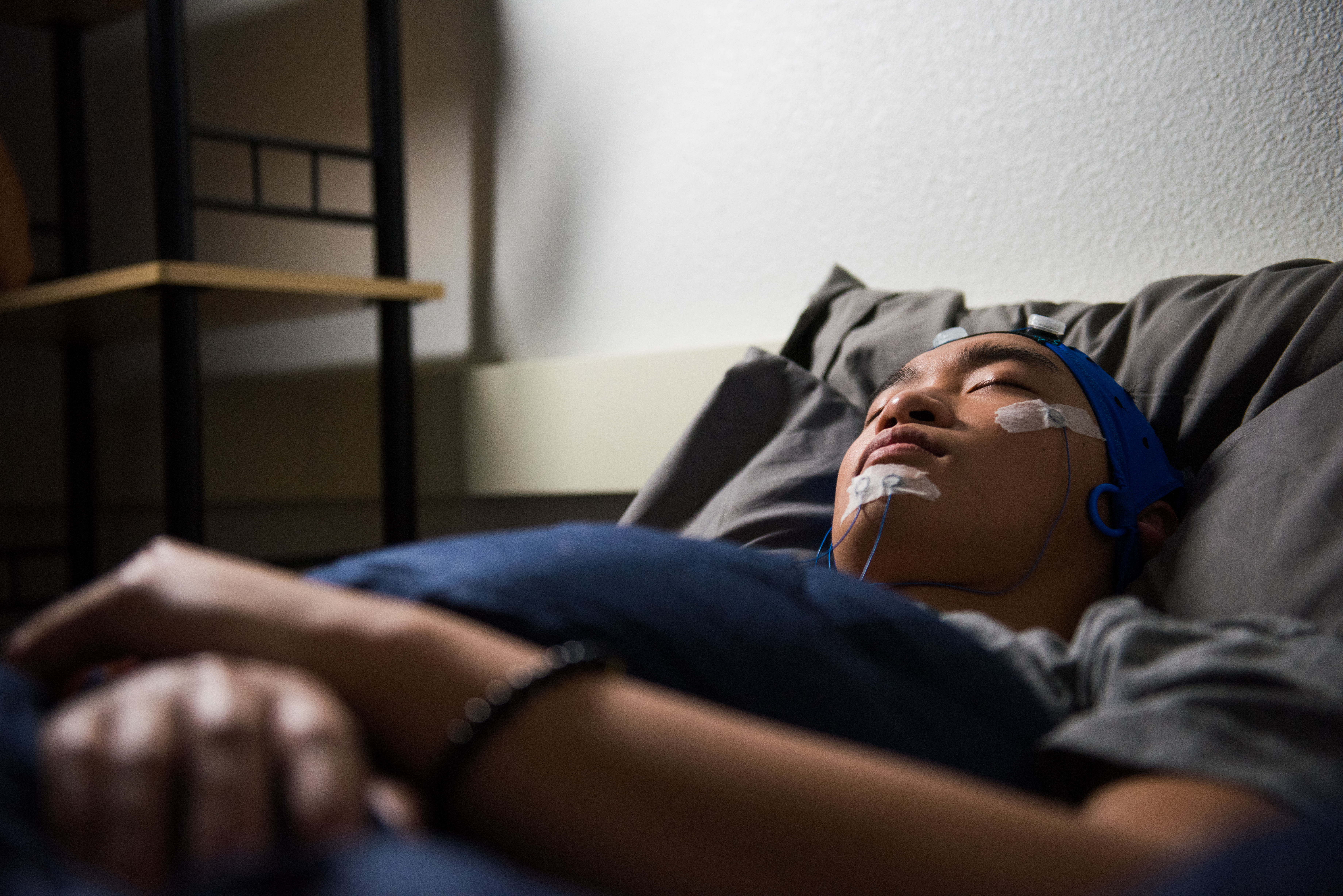 No, it’s not a student dozing off while studying. Kelly Bennion, assistant professor of psychology, recruited students to assist with a research study measuring brain activity during sleep.

Rock Around the Clock 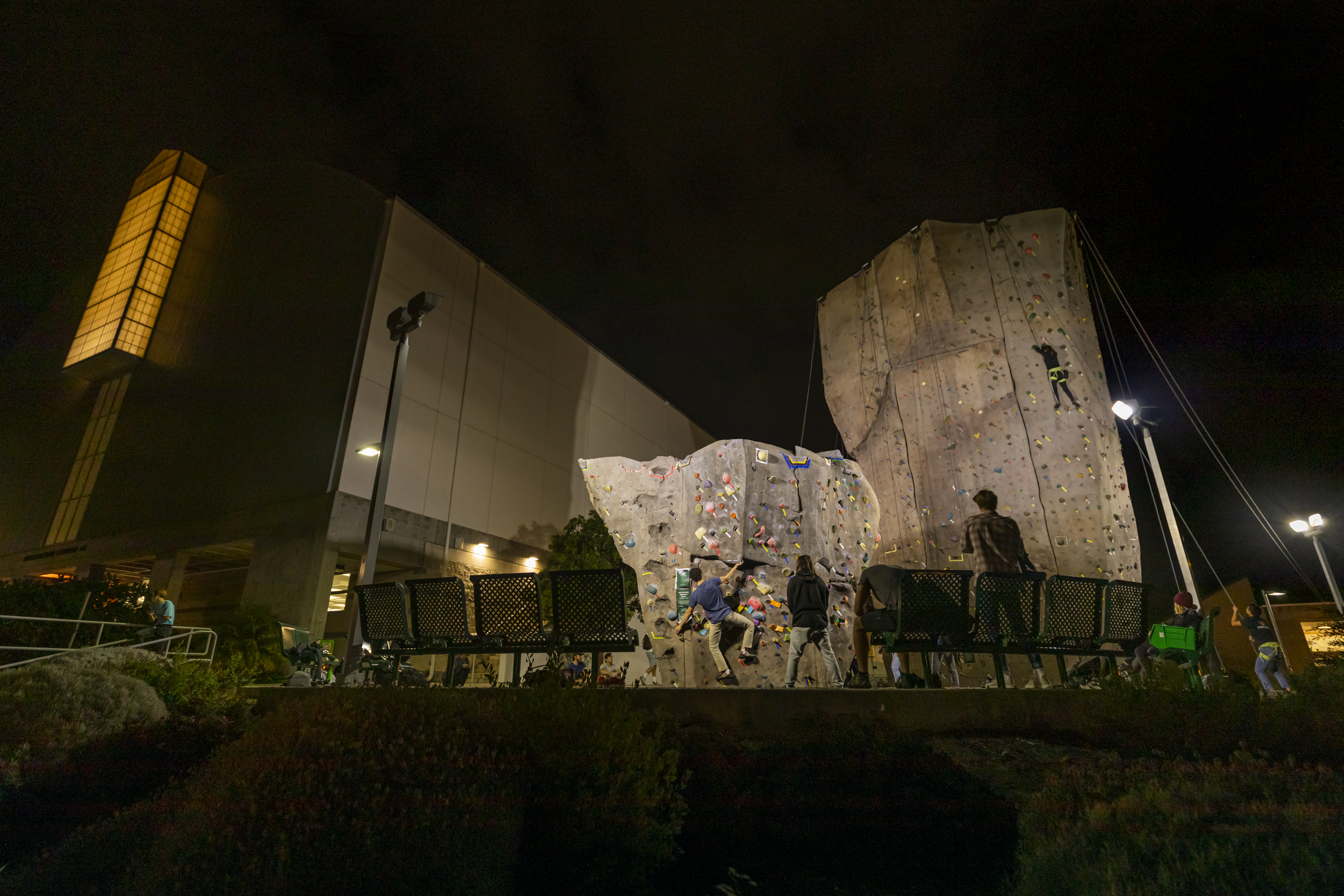 At Cal Poly’s Rec Center Climbing Park, students can practice their mountaineering moves until late into the evening.

Meet Me At the Library Perhaps no place on campus lights up during the long nights of winter finals week as much as the Kennedy Library. 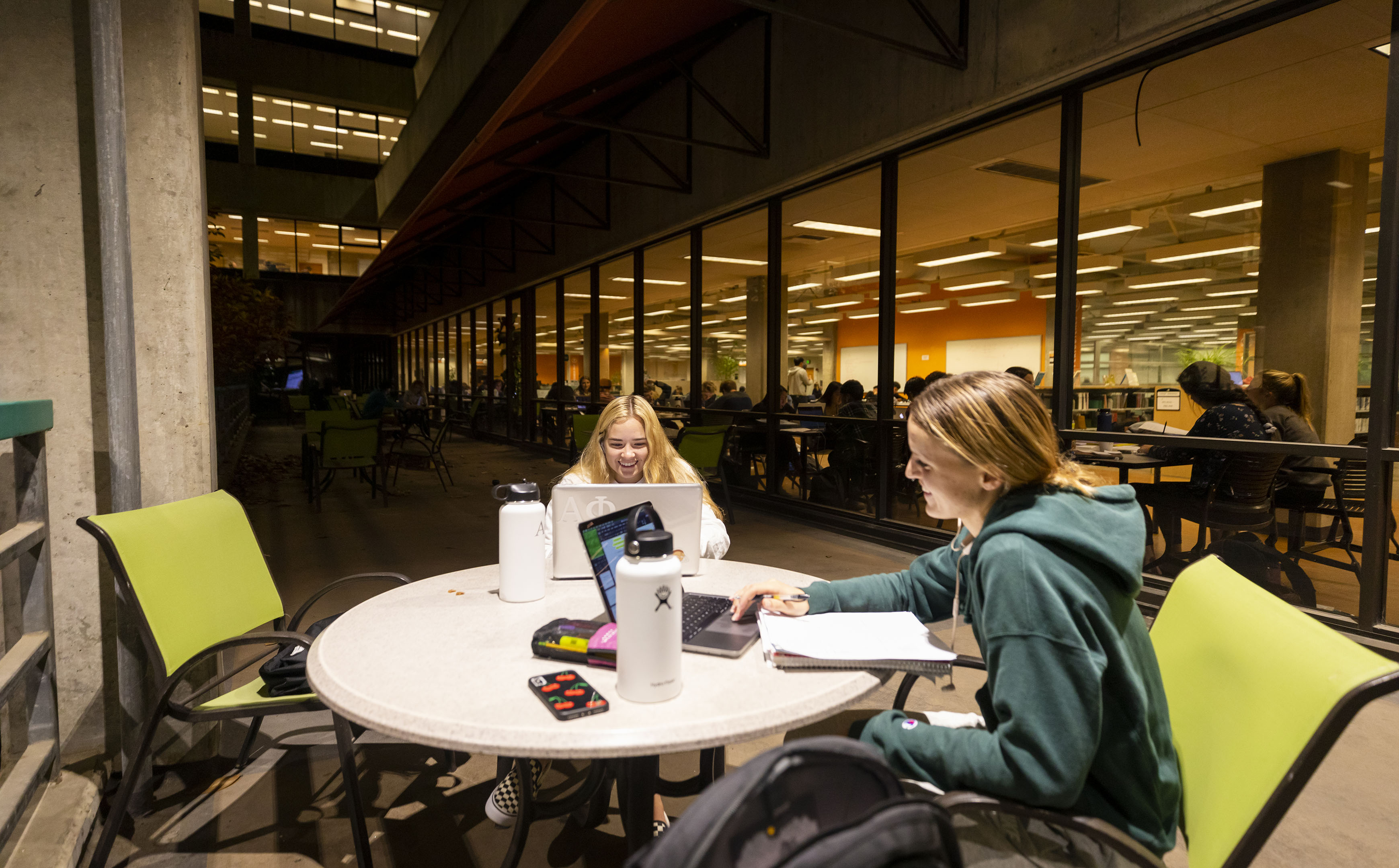 Under normal circumstances, the library is available for study hours around the clock.

A view from inside the library's iconic atrium, lit up with activity.

Candles in the Dark 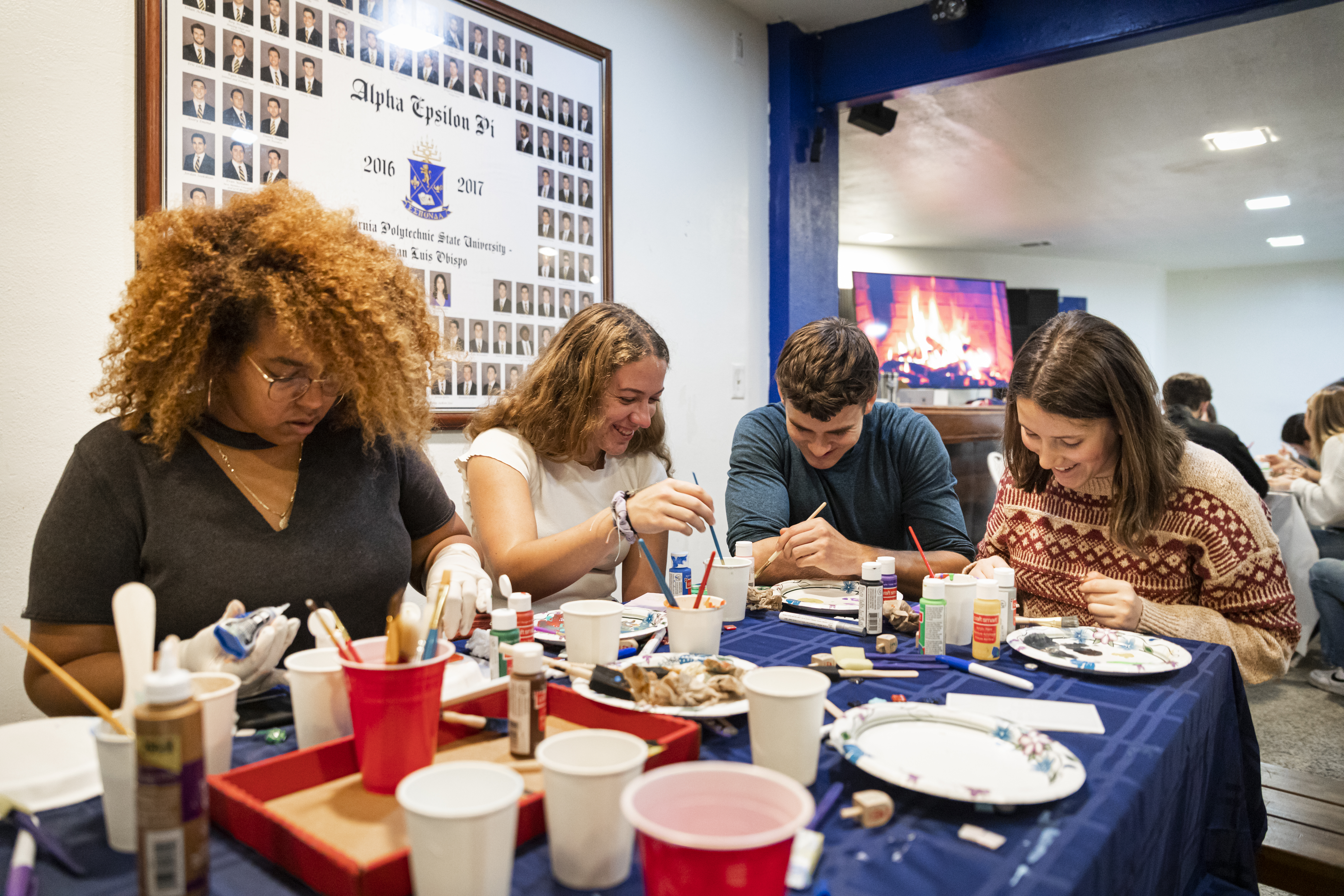 Members of the Jewish student life organization SLO Hillel bond over crafting and culture at a menorah making workshop at the Alpha Epsilon Pi house the week before Hanukkah. Roommates Andrew Do, Bryan Tang, Dylan Kha, and Noah Fabrick play a game of pool at Mustang Lanes before the start of winter finals. The group regularly makes time to get together every week, no matter how hectic the quarter’s academic schedule gets. “Saturday night is for the boys,” they said. 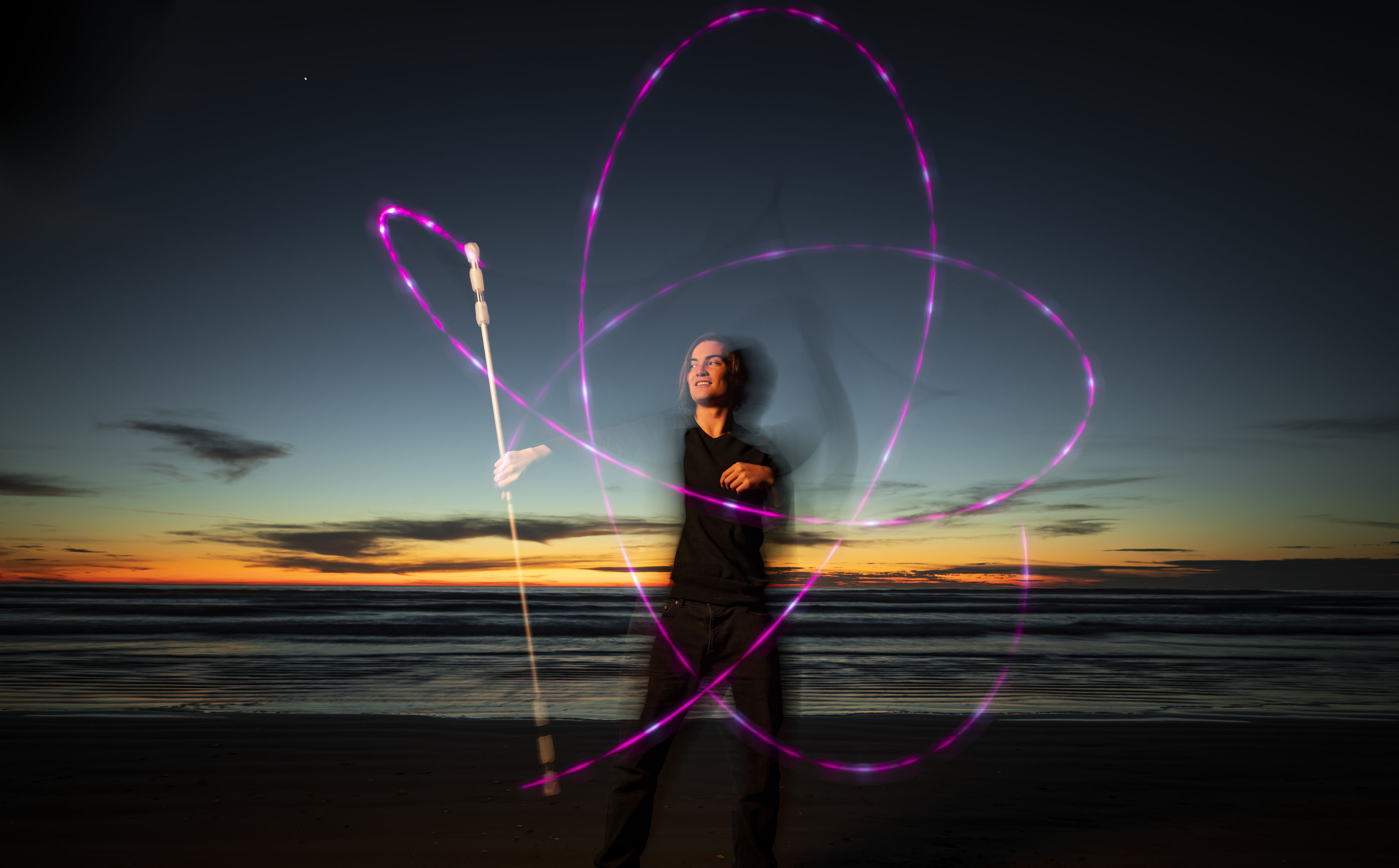 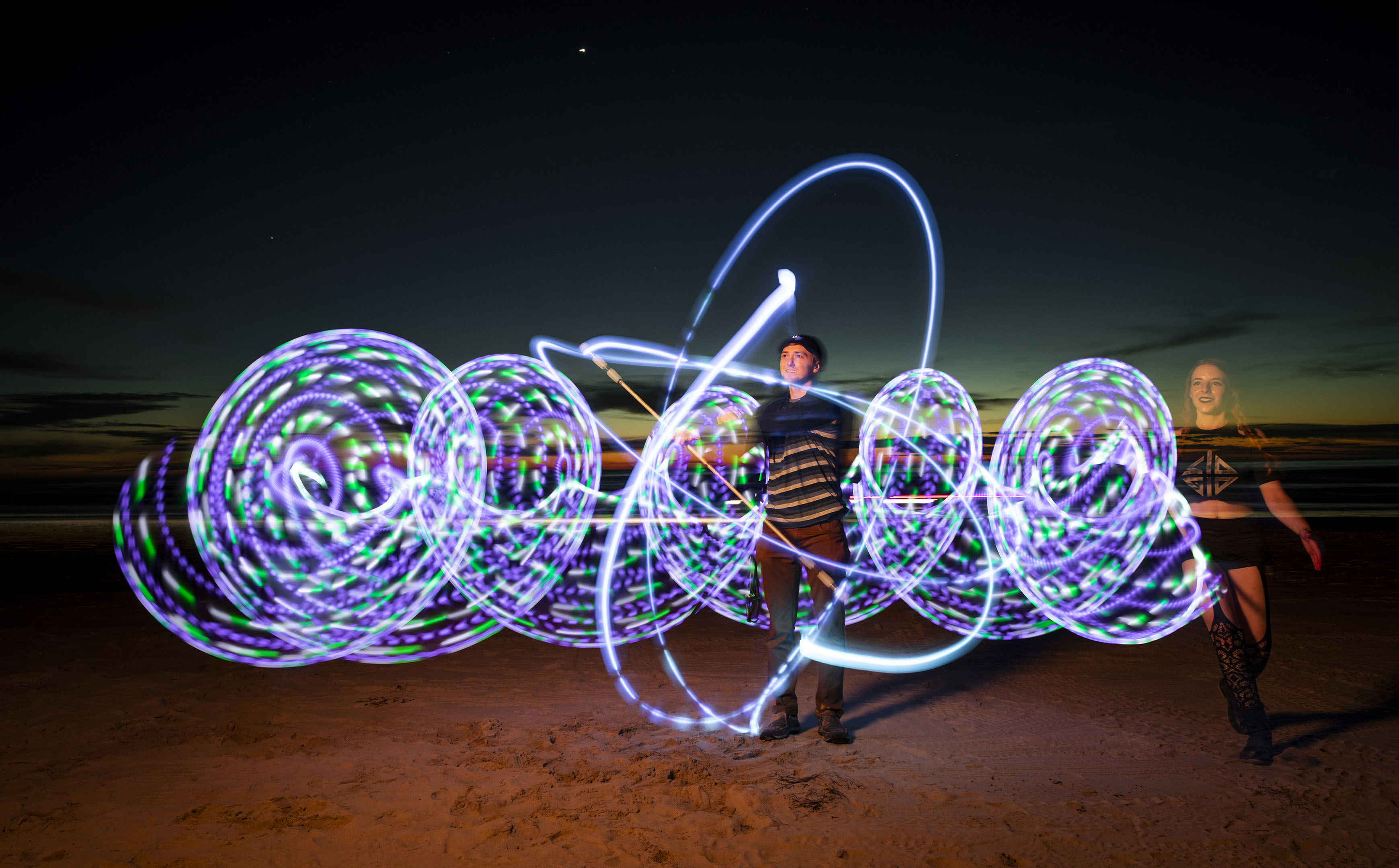 Jason Foster, who uses the alias Argron when practicing, creates an elaborate light pattern at a group practice session on Grover Beach.

Ella Griego, or Siren Spins, twirls a flaming torch or "poi" to create a ring of fire in the air. Nothing keeps the nighttime campus scene humming like a steady flow of tunes from the student DJs in the KCPR studio. Here, a veteran jockey trains a new DJ on how to keep the music going all night. 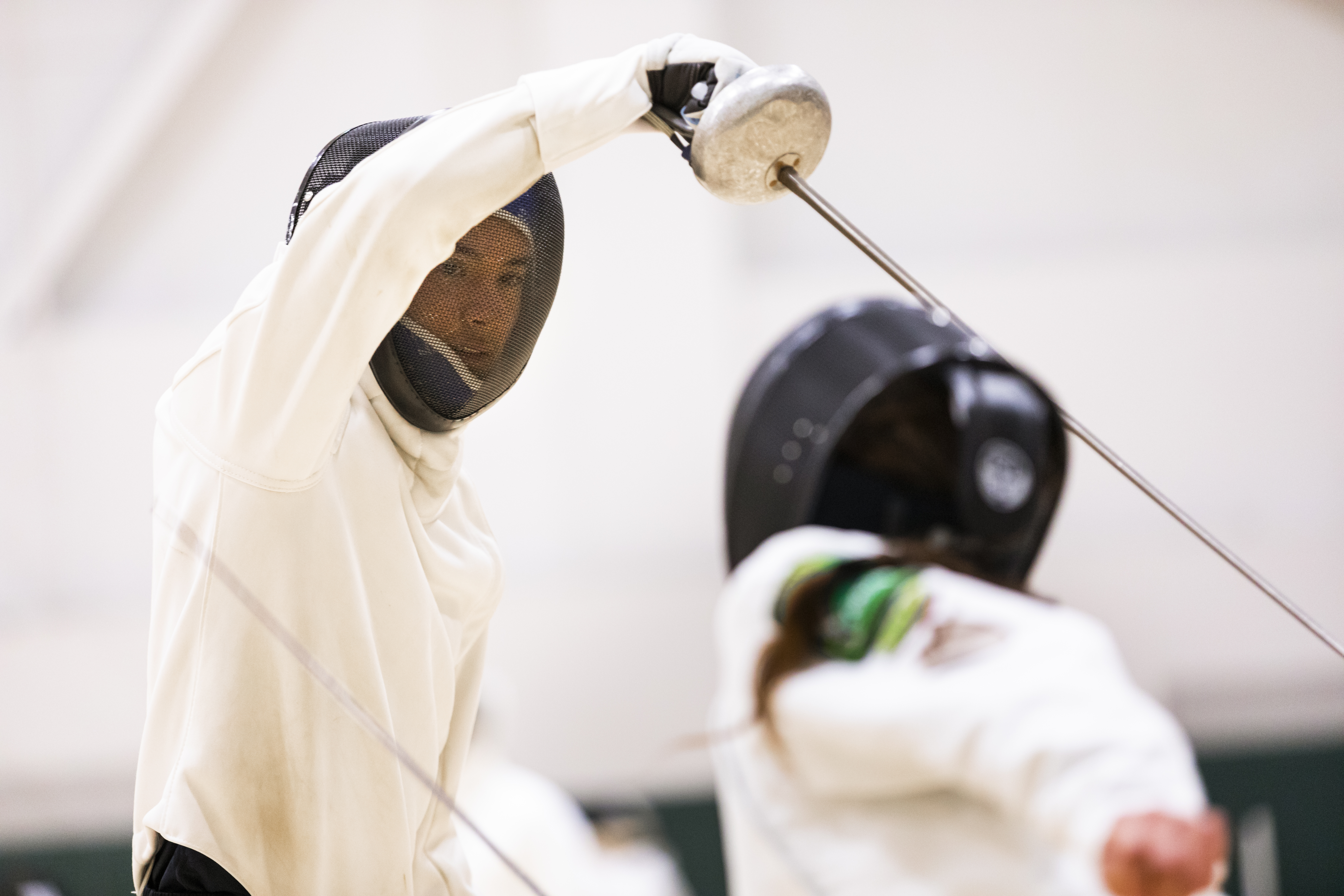 On a January evening at the Rec Center, members of the Cal Poly Fencing Club meet to match wits and sharpen their skills.

Up Late, or Up Early? For farmers, many of the most important tasks happen after the sun goes down. 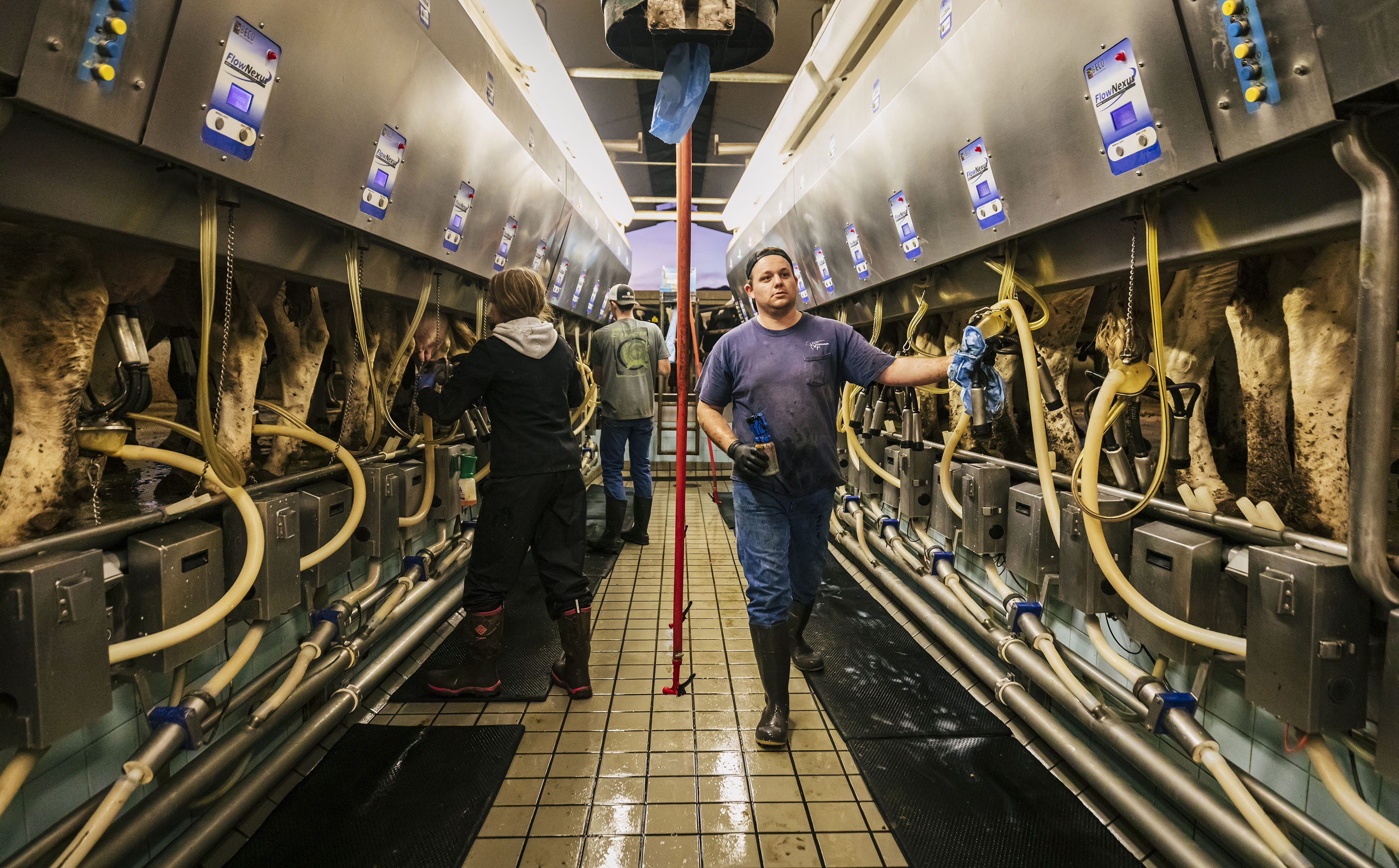