Inside the yakʔitʸutʸu community center, students bustle around, getting up to pour another mug of tea, munching on cookies, chatting and making new friends.

At the center of it all is Nishi Rajakaruna, an associate professor of biological sciences.

Rajakaruna, the Faculty in Residence at yakʔitʸutʸu, circulates throughout the room. He pours tea, introduces people to each other, stops to greet a student’s dog and offers snacks to the people just walking in.

“When I was walking in, I felt like I was part of something so great,” said J Douds, a third-year sociology student. “There are all different majors, years and backgrounds represented and every person has a story about their interaction with Nishi.”

Don’t see the video above? Click here to watch it.

As a faculty in residence, Rajakaruna has been to residents’ birthday parties and hosted movie nights. He’s also brought professors to yakʔitʸutʸu to hold office hours and to give talks about their travels and research, in an effort to bring professors closer to their students.

Rajakaruna usually connects with students through regular tea nights and the hiking club he runs on Sundays called Plants, Peaks and Pals. At these meetups, he takes students hiking on local trails. They look at plants together and the goal is to make friends.

“I want people to find a common space to talk about how their day went, what their plans are for tomorrow and beyond, and learn from each other,” Rajakaruna said.

The associate professor, who arrived at Cal Poly nearly three years ago, left Sri Lanka at the height of the country’s civil war in the 1990s. He came to the United States to study at College of the Atlantic on Mt. Desert Island in Maine.

His fellow students and faculty welcomed him with open arms, both inside and outside the classroom. One professor, who became a mentor, helped him grocery shop and open a checking account. 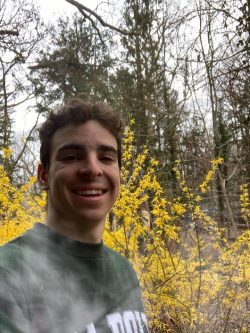 When the faculty in residence position first became available, someone suggested Rajakaruna apply for it.

“This kind of interaction keeps me happy,” he said. “I don’t think of Cal Poly as a job — it’s a way of life for me. My day doesn’t end when I’m done teaching.”

Just a few weeks after that night in the yakʔitʸutʸu community center, COVID-19 forced Cal Poly to move to a virtual format.

But it didn’t stop Rajakaruna from keeping his community connected — instead, he’s adjusted to the new normal.

One Sunday morning, he sent out a message on his GroupMe, which includes about 300 students, saying that he was going on a hike and asking if they wanted to join.

It became the first virtual gathering of the Plants, Peaks and Pals Club. Now, they take pictures of themselves on their separate hikes and talk about them together. 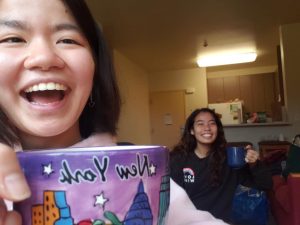 “I’ve tried to give people some continuity by trying to do virtual hikes on Sundays and tea nights,” Rajakaruna said. “I’m also trying to figure out how I can be available to them in other ways that they may need me right now.”

During one of his virtual tea nights on Zoom, the group, which at one point numbered approximately 50 people, chatted for more than two hours: about plants, their setups at home and the types of tea they were drinking.

While the event was winding down, Rajakaruna checked in.

“How are you guys handling the stress and isolation?” he asked. “Are you figuring out how to be positive and productive during this time? Any strategies you’d like to share?”

“Lots of hikes!” one student said, as the others smiled and laughed. Rajakaruna closed out the event by asking everyone to stay safe and healthy.

“I’ll be around if you want to stick around,” he said.

Rajakaruna said he always has his phone on him, and has made himself as available as possible to students who need to talk. He has Zoomed with several students who were roommates in yakʔitʸutʸu, showing them the doors of their rooms and listening as they commiserate with each other.

Rajakaruna on a solo hike, in an image he shared with his students during quarantine.

“I’m available for students to meet with whenever they need to talk to somebody,” Rajakaruna said. “Students are used to having some kind of a plan in terms of knowing what they’re going to do next week and living in limbo, I think, is the hardest.”

He’s been hearing more from students who have anxiety over what’s next, and tries to be an encouraging presence for them by helping them find ways to cope and build their confidence about the future. 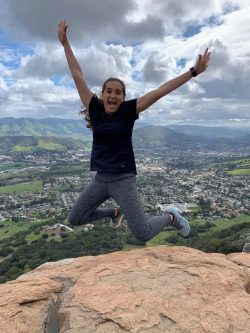 Nutrition student Amy Gitmed on one of Nishi’s Virtual Hikes.

“I’m trying, through example, to show students that things change, but we don’t have to stop our lives. We can still do what we love, like hiking or drinking tea together, even if we’re doing those things apart,” he said. “That kind of consistency is how you can keep students somewhat positive about what’s ahead and at the same time, adjust to this new world.”

Rajakaruna, who is still living in yakʔitʸutʸu, says he misses living with others, but has started to get to know some of the students still living on campus through his twice-daily walks. He said he hopes to find ways to connect with them, and bring some positivity to the experience of being on-campus during this time.

He said that in addition to virtual events, he’s thinking about possibly putting together some activities they can all do safely, like a scavenger hunt or a socially-distanced walk to see interesting plants and farm animals on campus.

“One of my main objectives is to keep the community together so they don’t lose their sense of belonging at Cal Poly or their sense of community,” Rajakaruna said. “It’s the best I can do under the current circumstances, and I’m trying to figure out the most effective ways to connect with students.”