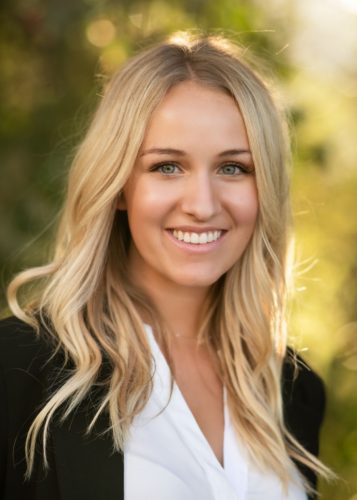 Every March, sales students from universities across the nation compete to become the National Collegiate Sales Competition (NCSC) champion. For NCSC 2020, 133 students competed from 68 universities. During most years, the competition takes place over an entire weekend in Atlanta, GA, and consists of a double-elimination tournament made up of 20-minute sales pitches, where students must sell a buyer on a specific product.

In December, I learned I had the privilege of representing Cal Poly in the NCSC, after winning the Cal Poly Fall Sales Competition. My peer, Sami Katwan, joined the Cal Poly NCSC team in February, after winning the Winter Cal Poly Sales Competition. With the help of our brilliant sales faculty members, Lisa Simon and Danielle Epstein, and our wonderful student coaches, Daniel Vyshetsky and Lauren Lee-Tran, we began to spend endless hours prepping, practicing, and carefully critiquing each other.

The brief outlined that we were to sell Gartner, a three-tiered solution for all IT investment needs. With this in mind, we spent our sessions carefully studying potential buyer profiles, crafting the questions, creating our presentation, and strategizing how to ultimately close the sale successfully.

Our plane tickets, hotels and transportation were all booked when we were informed that the 2020 competition would be held virtually for the first time in history due to the global pandemic. This news caught our whole team by surprise, as we had spent months practicing in-person selling. While it was not what we had initially prepared for, we set out to quickly adapt to the situation.

As I mentioned, we had already been through two competitions during the academic year. The first, held in the fall, consisted of a face-to-face selling role play. The second, which took place in the winter, was held over Zoom in order to teach students how to conduct a sales call when meeting in person was not an option. Sami and I, thanks to the preparation provided by our instructors, were familiar with video conference sales calls and, therefore, were prepared when the competition switched to virtual.

Whether you are learning to sell virtually due to a global pandemic, or attending a meeting, class, or presentation, events often take turns that are unexpected. I’ve learned that the most valuable thing you can do for yourself is to welcome change and adapt as needed.

The practicing did not die down once we had the new format, and by the morning of Saturday, March 28, 2020, I entered the Zoom call with confidence. After three days and three rounds of arduous competition, I learned that I had made it to the Final Four. While I was overwhelmed with joy, my nerves suddenly took over. Unlike the other rounds, I would not be provided with information regarding my buyer until 30 minutes before my final presentation. This would require me to think quickly on my feet, to be flexible, and to adapt to whatever was thrown my way.

Although the pressure of the unknown weighed on my shoulders, I took a second to reflect on what I had learned throughout my time in the Cal Poly sales minor. I not only had read about ways to be adaptable during the sale, but I had lived it. I thought back to multiple classes where Lisa Simon would give us a buyer profile and we would have to sell to her, in front of the entire class, on the spot.

Activities like this are what set Cal Poly students up for success in the real world. I’d learned how to sell by actually selling, something you don’t see on every college campus. I knew if I implemented the skills and feedback I had received from the role plays we had conducted in class, I could succeed in this competition. I was prepared for the moment.

I entered into the final round, rolled with the punches, and had a great time bringing to life everything I’d studied. I ended up finishing in second overall, the highest a Cal Poly student has ever placed in the competition. Having been one of only two Mustangs to make it into the Final Four during Cal Poly’s 14 years of competing in the NCSC, I was overwhelmed with joy to finish runner-up in a field of 133 competitors. I could not have achieved this without my team, my flexibility, and all that I had learned over the past four years at Cal Poly.

This year’s NCSC competition provided a great example of how, in life, things are going to shift and change. When this happens, you may not have any control over the situation. Whether you are learning to sell virtually due to a global pandemic, or attending a meeting, class, or presentation, events often take turns that are unexpected. I’ve learned that the most valuable thing you can do for yourself is to welcome change and adapt as needed.

Cal Poly’s philosophy instills this skillset in each of its students. We are given the opportunity to practice flexibility throughout our education. Rather than fearing the obstacles that change can present, we are prepared to figure out how to use them to our advantage. I’ve found that flexibility is a choice that, ultimately, has the power to shape our success in any situation.