One of the first signs that the coronavirus crisis was changing daily life was the immediate halt of nearly all sports activities around the world, including at Cal Poly. But before the pandemic hit, Mustangs enjoyed some major success. Take a look back at the big wins, major announcements and full stands from 2019. 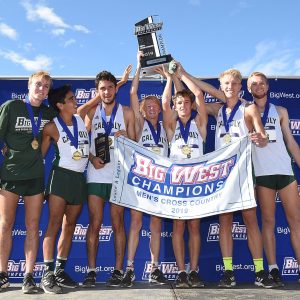 Civil engineer Jake Ritter took first in the 8k and propelled the men’s team to its fourth straight Big West title. It marks the third time a Big West team laced together four straight conference titles in the last 50 years. Ritter won the 8k with a time of 23:43.7 and a commanding lead – 42 seconds ahead of his closest competitor – cementing his time among the 10 best in course history.

“We’ve been working as a unit, and as a result the young guys got it done today,” said Mark Conover, Mustang Director of Track & Field/Cross Country. “To have this particular group really work well together and go earn it like this makes me proud.”

Leading the women’s team, psychology student Miranda Daschian finished first in the 6k with a time of 20:20.7. Sierra Brill and Cate Ratliff also placed in the top 10 in the 6k, helping the women’s team finish third overall in the Big West standings.

Daschian’s success extends to the university’s track team, where she won the 10,000- and 5,000-meter conference titles in spring. “Certainly, she’s led the team the past couple of years, and to cap off her Big West championship career in cross country like this, it just adds to her legacy,” Conover noted.

Up next was the NCAA West Regional Cross Country Championships. Ritter went on to take 29th place individually with a career-best time of 30:18.7. Four other Mustangs finished in the top 100 to lead Cal Poly to 10th place in the men’s 10k event. Cal Poly’s women’s team finished 20th in the 6k with Brill leading the Mustangs with an 86th place finish at 21:27.1. 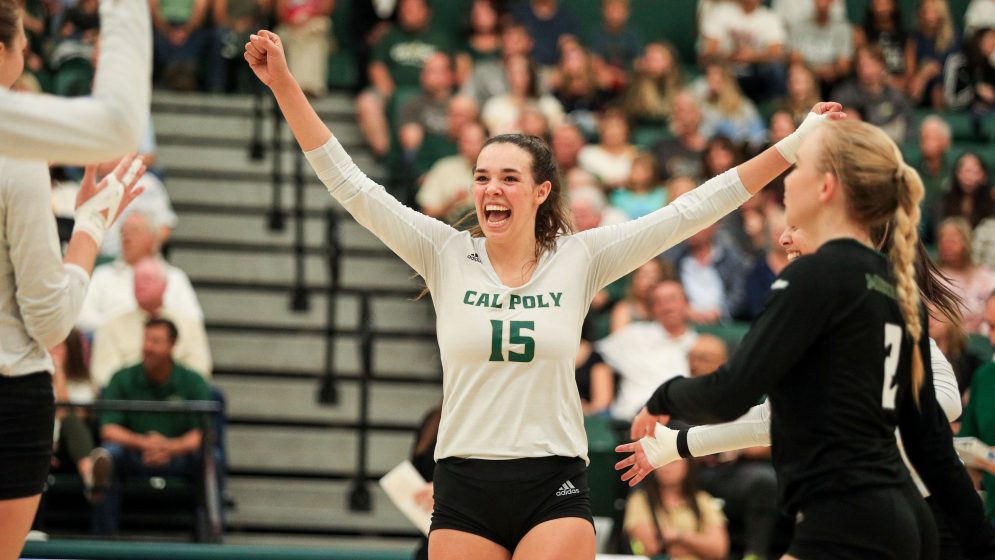 But 2019 had more in store that would toughen the team and set the stage for new faces to emerge as leaders on the court. As the season began, reigning Big West Player of the Year Torrey Van Winden remained sidelined with a concussion injury she sustained in practice at the end of the 2018 campaign. The Mustangs also started with a tough non-conference schedule, facing six teams who made the NCAA tournament last year. Still, the team battled through their early matches and maintained a 7-5 record heading into Big West play.

Enter junior Maia Dvoracek. In her first season as a six-rotation player, she started every match for the Mustangs and played in every set. The time on court proved to strengthen her skills as an outside hitter; she recorded a Big West leading 5.09 kills per set while notching more than 10 kills in 20 straight matches. At her peak, she landed 30 kills in a victory over No. 16 Utah. She was also one of the five best servers in the nation with 63 aces; together, the team averaged a staggering 1.93 aces per set in the regular season.

Can’t see the video above? Watch it here.

More Mustangs stepped up to lead the team, including sophomore setter Avalon DeNecochea, who averaged 9.5 assists per set and 31 total aces. Sophomore middle blocker Meredith Phillips racked up the second most kills on the team at 1.8 per set while leading the team with .95 blocks per set. On defense, senior libero Mika Dickson led Cal Poly with 3.59 digs per set.

At home, these Mustangs were impossible to beat. They extended their Mott Athletics Center winning streak to 32 consecutive matches, finishing three straight seasons without a home loss. Those matches also recorded the second-highest average attendance among Division I volleyball programs in the state, trailing only Stanford. Adding to the spectacle, 13 of the last 15 home wins came via decisive sweeps.

But on the road, Cal Poly suffered tough conference losses to Hawai’i, Santa Barbara and Long Beach State. The Mustangs rebounded to finish second in Big West play with a 13-3 record. Hope of an at-large post-season berth was still very much alive.

The Mustangs were selected for a sub-regional in Palo Alto where they faced Georgia in the first round. After dropping the first two sets to the Bulldogs, Cal Poly roared back to take three straight sets and secure their first reverse sweep of the season. As Dvoracek continued to shine with 14 kills and 12 digs, Van Winden made her return to the court, landing 13 kills in her first appearance of the season.

Up next was a match versus Stanford, the reigning national champions and regional hosts. The Cardinal were dominant, sweeping Cal Poly in straight sets despite the Mustangs’ double-digit kills and 39 digs.

The team finished the season with a 21-9 record overall, which included their first post-season win since 2017.

Men’s Basketball Ventures Across the Pond

The Cal Poly men’s basketball program began its latest season with a nine-day, four-game tour of London in September. This isn’t the first time the Mustangs have ventured abroad in pre-season play. Squads played in France in 2015, Costa Rica in 2011 and Australia in 2007 thanks to donor support.

Cal Poly finished the tour with a 2-2 record, defeating the University of Surrey Scorchers and Barking Abbey Basketball Academy. Along the way, the team also made stops at Buckingham Palace and the Houses of Parliament.

The 2020 season will be one of change for Mustang Football as Beau Baldwin takes the reigns as head coach, the 17th in program history. No stranger to the Big Sky conference, Baldwin coached Eastern Washington to the 2010 NCAA Division I Football Championship Subdivision national title. Most recently, he served as offensive coordinator and quarterbacks coach at Cal for the last three seasons.

“His desire to lead and mentor young men, and be an educator is something that is a ‘must’ at Cal Poly,” said Athletic Director Don Oberhelman. “In addition, he has a proven track record of winning Big Sky and national championships, recruiting top notch student-athletes, graduating his students, and creating NFL opportunities for many. Beau just seems to fit perfectly with Cal Poly.”