For the 10th consecutive year, Cal Poly’s Alternative Breaks program sent students to New Orleans over Spring Break to engage in a different kind of Learn by Doing experience — volunteering to help some of the city’s needy residents, including those still struggling to recover from Hurricane Katrina.

For Bradley Kyker, the senior coordinator of Cal Poly’s Center for Service in Action, the annual project serves as a reminder of the need that still exists in some of the city’s most neglected areas. It was more than a decade ago that Katrina breached the city’s levees, flooding approximately 80 percent of New Orleans, causing more than $100 billion in damage and killing more than 1,200 residents.

The project aims to help residents in some of the city’s poorest areas such as the Lower Ninth Ward and St. Bernard’s Parish.

“Those neighborhoods are still decimated,” Kyker said. “They still have buildings sitting around that are condemned and people still are inhabiting buildings that should be condemned. That sense of community sometimes feels so tattered and frayed. That’s what has become even more amplified over the post-Katrina years.”

The students spent the week sorting thousands of pounds of donated goods at a local food bank, helping residents save money by streamlining their energy usage, and helping with demolition work to repair damaged homes. In one day, the students saved a homeowner $15,000 in demolition costs ahead of a long-overdue renovation.

Kyker said that in addition to assisting New Orleans residents, the trip provides Cal Poly students with valuable lessons in privilege and culture, away from the safer confines of the university campus. There was no shortage of eye-opening moments for many of the students.

Fourth-year communications major Cassidy Adams added that the group’s work to clean up homes damaged by both Katrina and an F-3 tornado, which tore through the city in February, offered a mix of desperation and a surprising dose of hope. 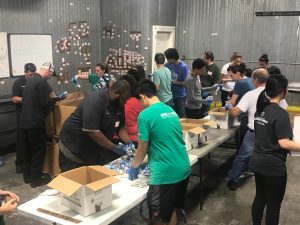 “Some of the residents we were helping told us they were hit by Katrina and had just recently rebuilt their house when the tornado struck,” said Adams. “I’ve never seen thatmuch devastation in person. And yet, they had such a unique perspective on life. All of the people I met on the trip kept telling me, ‘we’re alive, so we’re blessed.’”

Rebecca Fuerst, a third-year liberal studies major, recalled helping a resident in the same neighborhood who had spent years rebuilding from the flooding and the tornado, and who had even lost his wife to cancer.

“He was so alone yet so hopeful,” she said. “He kept telling us that he loves New Orleans and would never move anywhere else. He was really inspiring because even though he kept getting knocked down, you’d never know it.”

Kyker is proud to be a part of a program that does its part to help those in need — all while allowing students to develop newer, larger perspectives that contribute to growth and change.

“That’s the whole point and spirit behind Alternative Breaks,” he said. “We want to develop intercultural competencies in our students. We’re proud that our programs, local and global, are one of the places where students can diversify their learning at Cal Poly.”