PHOTO courtesy of the Righetti Family
Righetti with his aircraft, Katydid, which was named for his wife, Cathryn.

Cal Poly alumnus and P-51 pilot Elwyn G. Righetti (Meat Animals,’35) remains one of the most unknown yet compelling and colorful commanders of World War II. Arriving late to the war, he led the England-based 55th Fighter Group during the closing months of the fight with a no-holds-barred aggressiveness that transformed the group from a middling organization into a headline-grabbing team. Righetti quickly achieved ace status and additionally scored more strafing victories — 27 — than any other Eighth Air Force pilot. The following is adapted from Jay A. Stout’s new book, “Vanished Hero: The Life, War and Mysterious Disappearance of America’s WWII Strafing King.” 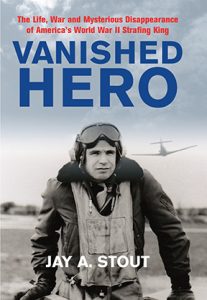 ahead, drawing slow, weary breaths. All at once he grunted, grabbed his flying gear and stepped to the ground and toward his P-51.

Block letters across the sleek fighter’s nose marked it as Katydid — named after his wife, Cathryn. Next to the name, a voluptuous, green caricature of a katydid struck a pose, conveying a distinctly flirtatious look.

Righetti zipped his jacket against the brisk English morning and donned his leather helmet. After so many months of combat, it stank of sweat, but its snugness was nevertheless familiar and comforting. He pulled the goggles that were fastened to it over his eyes to make certain they were clean. Through them, across the airfield, he saw dozens of other pilots and ground crews readying for the day’s mission.

Katydid coughed to life with a barking, blue-smoke growl that quickly settled into a syrupy rumble. Righetti loved the Mustang and especially liked how it wrapped itself around him as if it were a bespoke suit. And no flying machine could match its sleek good looks — a striking balance of purposeful power and aerodynamic efficiency.

He looked across the airfield where dozens of other P-51s also sat idling. Their pilots waited for his lead. He checked his wristwatch against the slip of paper strapped to his knee. It was marked with important particulars about the day’s mission, such as the takeoff and rendezvous times, the route, the markings of the bomber units that were to be escorted and the expected weather — among other important information. The slip was marked with the date, April 17, 1945. It was his 30th birthday, and he reflected for a moment on his wife and young daughter. They would be asleep now, at home near San Luis Obispo on the ranch where he was born and raised.

The 55th was assigned to escort B-17s of the Eighth Air Force’s 3rd Air Division across targets in Dresden. In fact, the war was nearly over and there was little promise of air combat as the Allies had beaten the Luftwaffe — the German Air Force — nearly out of existence. Indeed, the Nazis were expected to surrender, or be completely overrun, during the next few weeks. It was a timeframe that neatly corresponded with the end of Righetti’s combat tour as he had to fly only a few more missions before reaching the 300 combat hours required to rotate back to the States. Regardless, he was exhausted and ready for it to be over.

Righetti returned his crew chief’s salute and eased his aircraft forward. Its nose blocked his view and he fishtailed the little fighter as he taxied. Other aircraft left their hardstands, likewise weaving, as they fell into a long, snaking line behind him. Crew chiefs, armorers and other support personnel held tightly to their hats and shielded their eyes from the propeller-blown dust and debris.

Nearing the runway, Righetti cranked the canopy closed. Behind him he saw the three squadrons that made up the 55th readying for takeoff. He rolled onto the runway and looked over at his wingman, Carroll Henry. Henry taxied next to him and flashed a smile. The rumble of Katydid’s engine grew into a roar as Righetti eased the throttle forward; Henry stuck with him.

At just more than 100 miles per hour, the tails of the two aircraft cleared the ground; seconds later they were airborne. Righetti and Henry raised their landing gear simultaneously and climbed straight ahead. Behind them, the group’s other aircraft chased each other down the runway and into the sky.

A rare photo of Righetti in flight in Katydid, a P-51 Mustang

Nearing Freiberg, Righetti peered past his gunsight. Straight ahead, he spotted a series of specks at the head of a great carpet of white, fluffy contrails. As he approached, the specks turned into bombers, and he recognized the bright white squares painted on the tails of each of the big B-17s — the markings identified them as from the 3rd Air Division.

As expected, the Luftwaffe failed to challenge the Americans. The 55th’s escort duties were handed off to another group, and Righetti turned his pilots loose to look for targets of opportunity. He took Henry and one of the group’s three squadrons down to just a few thousand feet and trolled the area north and west of Dresden. The pilots looked for whatever merited killing, to include aircraft, trucks, troops, trains or anything else.

Righetti spotted an airfield near the town of Riesa. There were enemy aircraft parked at various points around the airfield, and Righetti ordered his men to stay at altitude while he dropped down to check for antiaircraft guns. Henry asked for permission to follow him. “He wanted me to stay up there with the other guys,” Henry said. “But when I requested, he let me go.”

Righetti dove almost to the ground before leveling off. With Henry on his wing, Righetti spotted an Me-109 parked at the edge of the airfield. He banked slightly left and lowered the aircraft’s nose until his gunsight rested on the fuselage just below the canopy. He held it there as Katydid closed the range.

Righetti finally squeezed the trigger and the six, .50-caliber machine guns — three in each wing — responded with a bucking roar that actually slowed his aircraft. Each of the guns sent armor-piercing projectiles toward the enemy fighter at a rate of 800 rounds per minute.

An instant passed before great clots of earth erupted from the ground around the German fighter. The rounds which found their mark twinkled and flashed and tore pieces from the Me-109 before turning it into a fireball just as he passed overhead. At the same time, Righetti spotted an FW-190 readying to land. He called out its position and told Henry, “Go get it.” 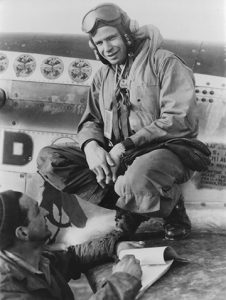 Slow as he was — and with his landing gear extended — the German fighter pilot was virtually helpless. Henry framed the FW-190 in his gunsight, fired his guns, and knocked the hapless German out of the sky. “I killed him I guess, because he just hit the runway and rolled over. The plane was on fire when he hit the ground.”

Righetti wrenched his ship around in a sequence of sharp, treetop-level turns while enemy gun crews tried to shoot him down. Puffs of anti-aircraft fire burst around him as he lined up for another run. Notwithstanding the efforts of the defenders, Righetti set several more aircraft afire.

By the time he started his third firing run, the enemy gunners were fully alert. He spotted another aircraft and made for it. In range, he fired and saw his bullets arc over the airfield and into the German fighter.

Righetti’s reputation as an extraordinarily aggressive pilot was well known, but his subsequent actions were almost farcical. “I have enough ammo for one more pass,” he called. Instead of limping away toward safety, he hauled his Mustang around and shot up another aircraft. 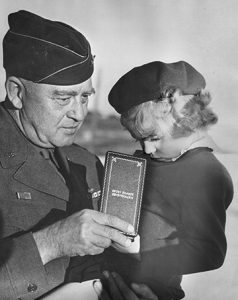 Righetti’s daughter, Kyle, a current San Luis Obispo resident, is presented with her father’s decorations at a military ceremony held at Fort Ord, Calif., on November 6, 1946.

It was only a short time later that Katydid’s engine gave up. Righetti opted to crash land rather than bail out and made toward an open space in the countryside. The silver fighter touched down and the shriek of its metal underside ripping across the ground drowned out every other sound. It decelerated violently, and Righetti’s face smashed into the gunsight; he had forgotten to lock his safety harness. An instant or two later, Katydid heaved to a stop. Aside from his heavy breathing, there was no noise but a faint ticking as the hot metal of the dead engine cooled and contracted.

Righetti called over the radio: “Tell the family I’m okay. Broke my nose on landing. It’s been a hell of a lot of fun working with you, gang. Be seeing you a little later.”

He was never seen or heard from again.