Selynna Sun, a third-year computer science student and president of the SLO Hacks student club, shared this reflection on her goal of building a hacking community in California and abroad.

We all come to Cal Poly with big dreams. What better way to achieve them than Learn by Doing? The biggest way I live that philosophy is something outside of class called hackathons.

In short, hackathons are 24-36 hour “coding marathons” where the end goal is to successfully build a project — it could be anything from a mobile app to a website, a hardware device to a machine learning model. 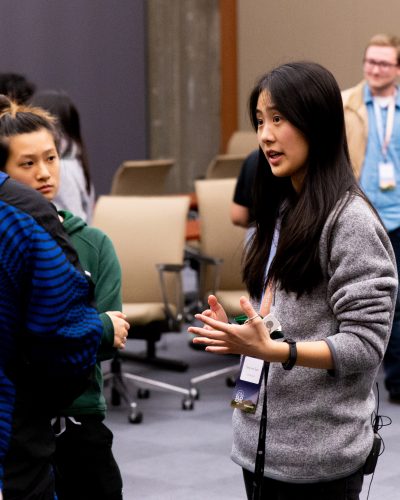 The lack of a hackathon community at my high school led me to found my own event called Los Altos Hacks during my senior year. Now in its fourth year, Los Altos Hacks helped establish a solid hackathon community in the area, inspiring students at other schools to start their own, and gaining nationwide recognition. When I thought about college, Cal Poly became attractive for its Learn by Doing motto and for its lack of a nationally recognized collegiate hackathon. I wanted to create one here.

In January of my first year, I asked my fellow computing majors if anybody wanted to organize a hackathon with me, and seven of us ended up starting what is now known as SLO Hacks.

SLO Hacks is a club that organizes quarterly hackathons for the community. Every February, we run our flagship event, bringing students and dozens of alumni together from all around the U.S. with Cal Poly students from across campus to work on projects in artificial intelligence, game design and hardware. Our 2019 event was the largest hackathon in Cal Poly history: 36 hours, 60 projects built, 300+ attendees, and most importantly, eight delicious meals from local vendors.

I’ve learned countless lessons throughout organizing events for SLO Hacks. While managing 22 students over different teams, I’ve gotten the chance to polish my technical skills through building websites for our tech team, work with multiple Cal Poly administrators to host our event, and raise tens of thousands of dollars through our sponsorship team. It’s such an honor to have served as the president, to see the club start from nothing and continually accomplish such big things.

SLO Hacks has dominated the first three years of my college life, but I’ve always wanted to engage with the hackathon community internationally. Since my first year of college, I’ve been involved with an organization called Major League Hacking, the official student hackathon league in North America and Europe with over 135,000 hackers. I work with them as a hackathon coach, traveling all over North America, supporting and interacting with hundreds of students a couple weekends each month while empowering and building the hackathon community.

While I serve in more of a mentor role at most hackathons, I still occasionally join in as an attendee when traveling to international hackathons abroad and corporate hackathons in the US. The hackathon community is very different as an international hacker — students in the U.S. tend to have similar experiences and perspectives, but abroad, they’re more unique. My first-ever international hackathon was VHacks, located right in the heart of Vatican City. It was incredible meeting students from more than 30 countries and building a project that my team and I were able to take to Microsoft’s Imagine Cup US Finals and World Finals (Microsoft’s global competition for student innovation).

It’s challenging being a full-time student and traveling constantly — there have been many weeks when I’d only be in SLO for two days out of seven, or when I’d be jetlagged to no end. However, it’s still so worth it: being able to see more of the world as a college student has been truly eye-opening.

I have an incredibly rewarding job — I’m constantly inspired by talented and passionate students that spend their weekend building crazy projects, sometimes with no prior experience at all.