Cal Poly is known for beautiful scenery and weather: 70-degree days and sunshine. But it isn’t always blue skies. We take a look back through the University Archives to see some of the wild weather extremes experienced at Cal Poly in the last century. 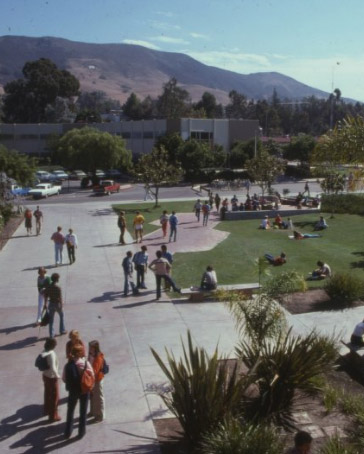 Students gathering in the sun on Cal Poly’s Dexter Lawn in 1977. Photo courtesy of University Archives.

In an average year, Cal Poly receives about 22 inches of rain. So when it rained 24 inches in one month, January 1969, the campus and the local community struggled with the wet weather. In a 48-hour period alone, it rained more than 10 inches. Buildings flooded, campus lost power, and the nearly finished Vista Grande dining complex was flooded due to a backed-up drain. For the first time in history, San Luis Obispo County was officially declared a disaster zone (by then-Governor Ronald Reagan). Students organized “Operation San Luis Obispo” to help the city with cleanup and flood control.

There have been times of long absences of rain as well. The 1912-13 year was the driest year on record at Cal Poly, with only eight inches of rain. A drought in the 1976-77 year caused campus to cut back on campus landscaping. The recent five-year drought dried up Laguna Lake and led Cal Poly to reconsider landscaping and water use around campus.

Windy weather sweeps through often, especially in the fall and spring months. But the winds of January 1977 were extreme, when a “twister-like wind storm” swept through campus, causing power outages and picking up 15 empty Poultry Department range houses and blowing them across the agricultural fields. In May 1998, a freak tornado swept through the area between California and Slack streets, even traveling across Highway 101, with recorded wind speeds of up to 80 mph. 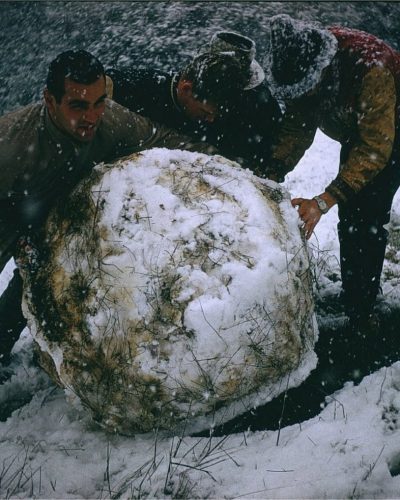 Students build a snowman in January of 1962. Photo courtesy of University Archives.

The balmy weather experienced at Cal Poly is crucial to support the production of agricultural crops on campus. Since the school opened in 1903, students and staff in the College of Agriculture have kept a close eye on the thermometer, because any time the temperature dips close to freezing, the avocado and citrus crops on campus need to be protected. The coldest recorded weather at Cal Poly was a brisk 12 degrees. In 1949 the El Mustang newspaper reported on temperatures that froze cars!

Snow is a rare, but not unheard of event on campus. Through the decades, students, faculty and staff have witnessed snow — though it rarely stuck around. In January 1962, students ventured outside to have fun in the snow. In March of 1976, it snowed twice! Students built a snowman and set it at the entrance to the University Union.

Many of these stories of wild weather can be told thanks to the efforts of students and staff who have collected weather data at the Cal Poly Weather Station since 1927. Today, the weather station is managed by the Irrigation Training and Research Center in the BioResource and Agricultural Engineering Department. The data the ITRC captures at the weather station supports on-campus research and commercial weather forecasting companies, the California Department of Water Resource’s California Irrigation Management System (CIMIS), and the National Oceanic and Atmospheric Administration.