On Friday afternoons, brightly-colored signs point the way to the Cal Poly Creamery, where dairy devotees can get their fix of Cal Poly ice creams and cheeses in a convenient drive thru format.

The drive thru, which has been up and running since August, was the brainchild of Dairy and Creamery Operations Manager Craig Russell.

Russell, who started running the Creamery at the end of July, noticed that there were some ways to improve production. One of them was using an ice cream filler machine to pack pints, which was more efficient than the previous method of packing them by hand.

After hiring a company to train everyone on the machine, “we went from making 100 pints of ice cream to 1,000 pints per four hours,” Russell said. “That drove me to say, ‘OK, let’s sell some ice cream.’”

But what to do with all that sweet frozen goodness?

Russell watched the meat unit operate their own drive thru to sell products, and thought it could be a good model. It worked: during the first Friday of the Creamery’s drive thru, they sold $3,500 worth of ice cream and cheese.

“Who doesn’t love ice cream?” said Cassidy Cooper, assistant manager for the Creamery and a recent animal science graduate. “We’ve revamped our ice cream by experimenting with different flavors, and what better way to showcase them than in a drive thru that’s COVID-friendly?” 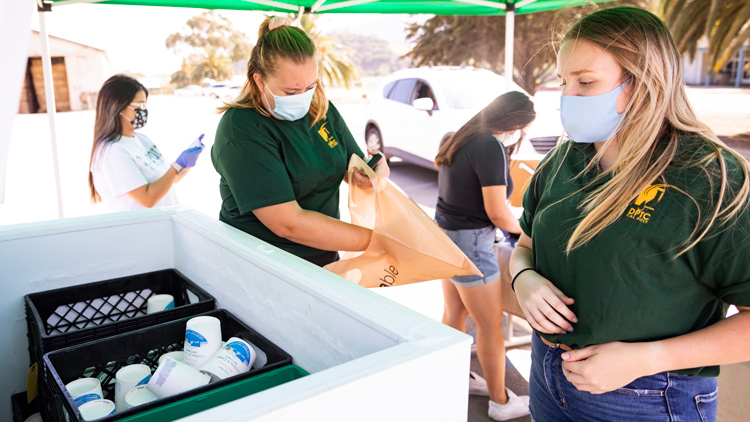 Since the drive thrus began, the Creamery has averaged about $2,800 a week in sales. All of the money goes back into the bottom line: supporting salaries for the approximately 20 student employees, purchasing ingredients, and so on. Creamery staff originally limited the ice cream options to four — mud pie, vanilla, chocolate chip, and cookies and cream — but mint chip and a holiday flavor, eggnog, have recently been added to the rotation, along with an array of cheeses.

As the success of the operation grows — Cal Poly ice cream is now carried in local grocery stores including California Fresh Market and Lassen’s Natural Foods — the Creamery’s Learn by Doing ethos continues to impact students.

“I’m really happy to be a part of it. It’s interesting to see the process go down,” said Jessi Cordova, a second-year agricultural business major.

Cordova is Russell’s business intern, and has been working on the business side of the Creamery since he took over.

“This is my first time coming up with a business plan and I got to execute it and watch it be profitable,” she said.

Cordova regularly chats with drive thru customers to see what’s working for them and what the Creamery can improve on, meeting customers who were drawn to the drive thru via social media, or by the signs student workers made and posted. One drive thru customer takes her kids there for a Friday treat after they’re done with Zoom school.

Cordova has also met with people in the ice cream industry to discuss what the Creamery needs to do to be profitable and sell products.

“Most of the days I’m in the office is really hands-on,” Cordova said. “He (Russell) really lets me explore and figure out what I need to do to promote the Creamery and the drive thru.”

Also pitching in to help with promotion is Genevieve Regli, a third-year agriculture communications major who manages social media for the Dairy and Creamery. 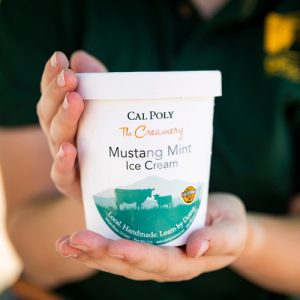 “We’re trying to tap into different markets,” she said. “I think about what would get someone like me to purchase a product, and what would get my parents or grandparents or friends to purchase this product. We have to be able to market to them, and we use all these different outlets to make sure that happens.”

Since Regli started promoting the drive thru on social media, the Creamery’s overall reach on Facebook has grown by more than 2,000%.

“It shows that we’re growing, which is what we like to see, and more and more people know who we are,” Regli said. “We’ve been really kicking it into gear and trying to reach all sorts of people.”

Cooper, who’s been working in the Creamery since her junior year, said her time there inspired her to go into the food production field.

“I don’t think any other school could have prepared me better than Cal Poly in the Learn by Doing aspect,” Cooper said. “The students are in charge of absolutely everything. It’s a great opportunity; most people who want to get into this industry after college don’t have this opportunity.”

Cooper acts as a liaison between the student workers and her boss, Katy Pankey, the Creamery’s production manager.

“It’s definitely taught me a lot of leadership and organization,” Cooper said. “It’s made me more confident in my abilities and being in the workplace.”