Nestled in between the arms of Building 52, the Cal Poly Observatory is both portal to the stars and a tool for meaningful research. The cinder block structure and dome roof, about 12 feet in diameter, were originally constructed in the late 1960s. Today it provides cozy confines for a 14-inch Meade research telescope that uses a digital camera to record images and track dimmer objects. A similarly-sized “eyepiece viewing” telescope, which replaces the camera with an eyepiece that lets people see things with their own eyes, is set up just outside the observatory. 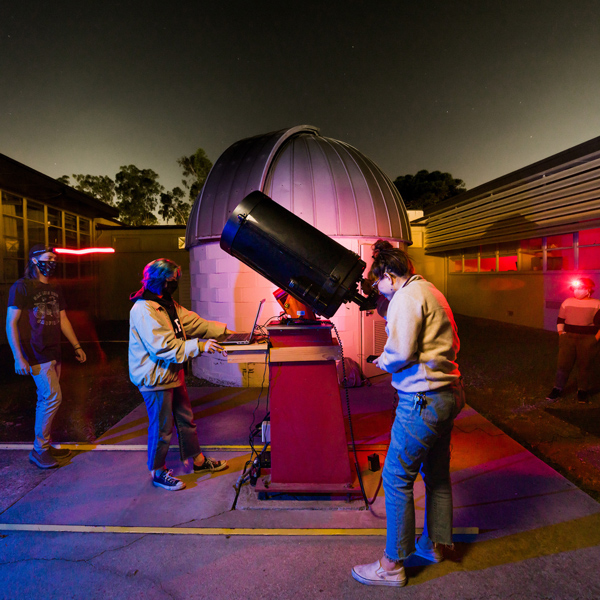 In December, physics student and Frost scholar Kailei Gallup used the research telescope to gather data on exoplanet transits — planets orbiting stars outside our solar system — for her senior project.

“That was a big reason I wanted to use the telescope — I’m getting all of my own data,” said Gallup, who tries to observe exoplanets twice a week when weather permits.

This is exactly what Professor David Mitchell of the Physics and Liberal Studies departments had in mind when he began rejuvenating the observatory nearly 20 years ago. He and teams of astronomy students have discovered several new planets since then, including one discovery as part of an international collaboration that found a new planet a few years ago. Mitchell also created an observational astronomy course that gets Mustangs like Gallup who are minoring in astronomy to conduct research in the observatory.

“I can have students out there putting their hands on the telescope, operating it, fixing problems, doing everything themselves,” said Mitchell, who specializes his research in extrasolar planets orbiting aging stars called red giants. “You can access publicly available data online in astronomy in a lot of cases, but I think that actually doing everything yourself is a powerful learning tool. It is very much Learn by Doing in action.” 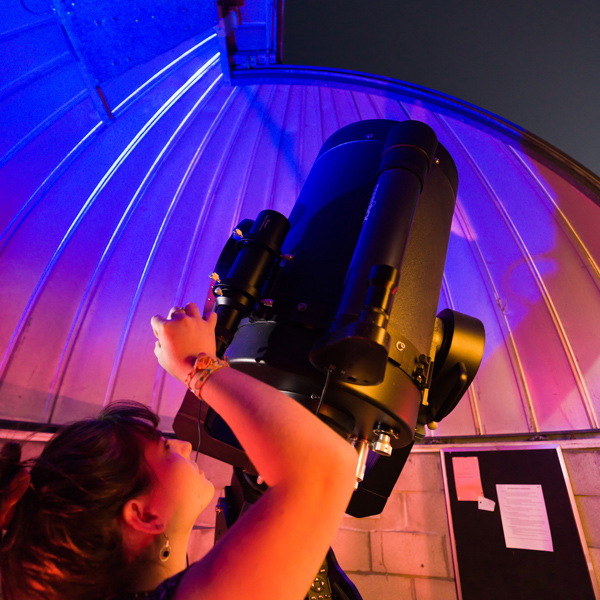 The observatory’s telescopes are mounted on motors that track for Earth’s rotation, helping budding astronomers make detailed and accurate observations.

During the pandemic, the observatory has mostly been closed to the public. Astronomy class visits to the eyepiece telescope outdoors resumed in spring 2021, once again empowering student assistants to teach their peers about the night sky. Mitchell is excited to see research pick up again and build on ingenuity of Mustangs who came before.

“It was actually student work that got the research telescope up and running and automated the dome,” he said. “At that time, I didn’t even know if it was possible to see a planet transit with our observatory, but those students showed it was possible! Every student project since then has been built on that work.”

Want more stellar conversation? See a Mustang Daily article from 1975 that talks about the Observatory’s origins. Tickets are also available for a talk by NASA scientist Dr. Stefanie Milam about the James Webb Space Telescope happening on campus and virtually March 3.