Patricia Murray (left) at the 2018 Miss California Competition with the most recent titleholder, Mackenzie Freed.

Many people don’t get the chance to come full circle in life. But Patricia Murray (Aerospace Engineering ’94) is not most people. She recently returned to the Miss California stage as CEO after winning the title more than 25 years ago while studying at Cal Poly.

As an aerospace engineering student in 1992, Murray’s calendar was filled, thanks to Cal Poly Choir, the London Study program and Poly Reps. On the weekends, Murray, who earned her pilot’s license as a teenager, would fly passengers home to log more flight time. Gliding high above the California coast, Murray envisioned a career as a pilot. The problem: she didn’t have the money to pay for flight school. 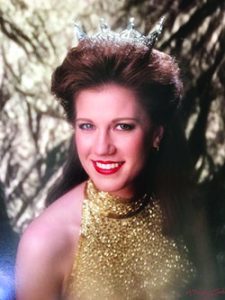 Patricia Murray (then Northrup) dons the Miss California crown in 1992

That’s where pageant scholarships entered the equation, says Murray. Though she considered herself more tomboy than beauty queen, she won a local competition in her home town and set her sights on the Miss California title and its prize money.

“Being an engineer at Poly, I wasn’t putting on makeup every day or dressing to the nines. It was a fun kind of alternative reality and a chance to exercise a part of [my] femininity,” she says. She wowed the judges, and at the end of the night, the Miss California crown was hers.

Murray spent the next year touring the state, speaking to more than 50,000 students in local schools in concert with the D.A.R.E. campaign against drugs. The California Office of Tourism even named her an ambassador, flying her to Japan, Taiwan and Germany to publicize the Golden State. Between scholarships and event appearances, Murray earned roughly $30,000 for flight school. It wasn’t long before she landed her dream job in the cockpit for American Airlines.

As a member of the California Air National Guard, Murray has flown six tours of duty overseas

She also put her skills to work in the California Air National Guard, where she served as an instructor pilot and deployed on six tours of duty in conflict zones like Iraq and Afghanistan. With her expertise in the C-130 aircraft, she led supply airdrops, goodwill missions and, most importantly, medical transport.

“They’d have a whole medical team traveling with them because they were hit with an IED (improvised explosive device) or something serious. When you got them to Bagram, and they were alive — they made it to that hospital — man, you slept good that night.”

Murray recently retired at the rank of lieutenant colonel.

In 2015, the phone rang with an opportunity to take the helm of Miss California and help redefine the competition for a modern audience. One of her key contributions has been bringing the competition back to TV. Before this year, Murray was the last Miss California to be crowned live. Her tenure has also brought in thousands of dollars in in-kind scholarships available to the participants.

“There’s a part of me that has a tremendous feeling of gratitude,” Murray says. “Giving back is easy because this organization gave so much to me.”