In 1996, a Mustang Daily reporter named Shoshana Hebshi interviewed her classmate with an unusual business idea and ended up writing the first article about Guayakí Yerba Mate. More than two decades later, the two conducted a follow-up interview to see what has changed.

When I met Alex Pryor in October 1996, we sat at an outdoor table near Barnes and Noble downtown San Luis Obispo. It was a sunny, beautiful afternoon, and he was explaining to me, a reporter for the Mustang Daily, how he became the “yerba mate dealer” on campus.

Hebshi’s article, the first profile written about Guayakí Yerba Mate, appeared in the Mustang Daily in 1996.

Through his Argentinian accent he explained how the drink of his culture was healthier for people and for the planet than the coffee we were downing by the gallons to stay focused through deadlines and papers and midterms.

“A lot of people are looking for a healthy alternative to coffee, and yerba mate is a perfect alternative,” he told me, showing me the traditional gourd and metal straw used to imbibe the drink. This was before all the supermarkets began stocking endless brands of energy drinks, kombucha and kefir. There was Arizona iced tea, if you were lucky.

Back then, we were starting to hear about rainforest destruction. Industry was the culprit, and there were no businesses I had heard of that set out to bring a product to market that not only sustained the rainforest, but also reinforced it. Pryor called his canopy-grown yerba mate a “holistic approach to saving the rainforest.” He talked about using the yerba mate cultivation as a way to empower the indigenous population, providing work for them and preserving their culture.

“That’s my whole mission,” he said. “That’s what I’d like to do with my food science degree.”

Pryor, then 25, was hocking yerba mate to students and small businesses in SLO as his part of his senior project, but in the two decades that followed, he and his four partners, who hooked up a few months after our interview and started the business in earnest, have created a global phenomenon using Pryor’s visionary model of fair trade, sustainable agriculture and Earth-friendly practices as Guayakí Yerba Mate.

“Other than the scale of things, nothing has changed that much, with a respect to the purpose,” said Pryor from his home in Argentina. “We have been totally aligned from the beginning with the purpose of working together with communities that live in the remnants of the forest.” 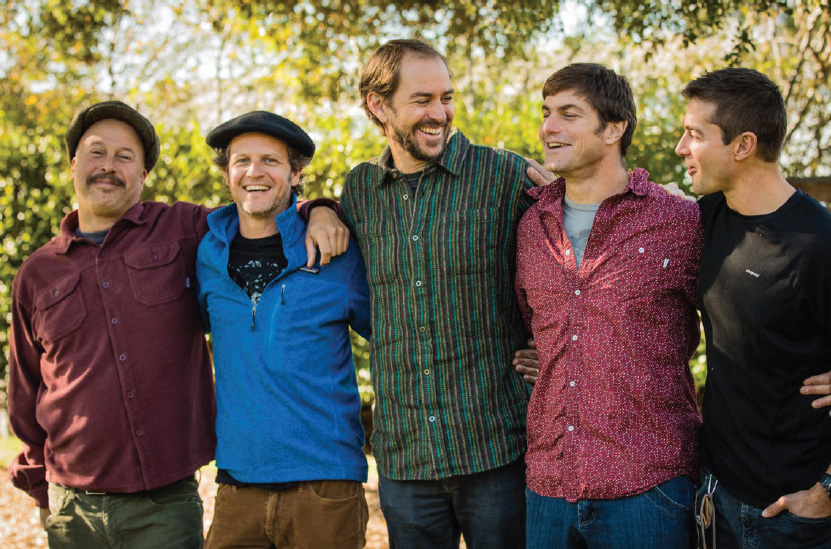 We spoke via Skype, as Pryor oversees sourcing of the South American yerba mate supply, which is cultivated from forested areas of Brazil, Paraguay and Argentina. The company itself is headquartered in Sebastopol, Calif., and still run by the five friends from San Luis Obispo: Pryor and his partners David Karr (Business Administration ’96), Michael “Miguel” Newton (Business Administration ’97), Steven Karr and Chris Mann. They call themselves the Semillas, which translates to “seeds.” Together, the Semillas have carried the business from its humble beginnings to its solid footing in the beverage industry.

In 2005, the company introduced glass bottles and expanded their distribution nationwide, bringing Guayakí into the mainstream. The company moved from San Luis Obispo to Sebastopol and hired more people, including a former president of marketing for Coca-Cola.

A moment came, Pryor said, where they had to think about moving away from the grassroots contact they had with people and focus on larger accounts. But Pryor and the Semillas held firm.

“That moment was a tough moment, but we decided to stay true to our vision of building healthy communities and growing slower and sticking around longer,” he says. “We are 21 years in, and it always feels like we’re just getting started.”

Despite that relative small size and slow growth, the company is making an impact beyond just its customers. Pryor believes that his company’s business model can help regenerate healthy economies and ecosystems in the communities where it sources its ingredients.

In addition to the company’s 150 formal employees, Guayakí works to cultivate yerba mate in partnership with six communities of more than 350 families spread out across 130,000 acres of South America. Ten years ago, Guyakí developed a goal to increase their reach to 1,000 families by 2020. Pryor said they are on track to meet that goal.

Pryor wants to be the benchmark for other companies as they set their own sustainable practices. He is calling on the food industry to develop business models to truly change the way industry works — to enhance communities rather than pillage them. “We want to inspire at least 1,000 other companies to work like us, and the impact will be a lot bigger.”