This spring, Surfer Magazine named Cal Poly one of its “Best Surf Colleges.” The ranking highlights an undeniably important aspect of life at Cal Poly — the waves and beaches of the Pacific coast are right in our backyard.

Meet a few members of the Cal Poly community whose lives and experiences — from surfing to entrepreneurship to research opportunities — are shaped by the waves.

Giving Back to the Ocean

For Marissa Miller, a first-year student from Oahu and a member of the Cal Poly surf team, the ocean is an inextricable part of a healthy mindset and successful academic life.

“I try to at least get out to the beach once a week,” she says. “If I don’t feel like I’m being productive or I can’t focus, I just go for a quick surf. It’s really refreshing, and then I can get back to work.”

Growing up surfing, Miller inherited the sense that just as the ocean nurtures her, she has a responsibility to return the favor. That’s why she selected environmental management as her major at Cal Poly — a school she chose for the opportunity for a change of scenery without losing that connection to the waves.

In high school, Miller founded an environmental activism club, organizing beach cleanups and encouraging her classmates to live more sustainably. Here at Cal Poly, she’s continuing her advocacy. She works with Green Campus Cal Poly, a student-driven group responsible for developing ways to promote ecological awareness on campus, and is an active member of the local chapter of the Surfrider Foundation, an international community of surfers who work to preserve the ocean.

“As someone who surfs and uses the water as a resource to clear my mind and have fun and feel connected, it’s my responsibility to protect it and save it for future generations,” she says. “The Earth provides for us, so we have to provide for the Earth. You can’t just take and take — it’s a reciprocal relationship.”

Tristan Sullaway first stepped on a surfboard around age 2. By 6, he was competing in local Southern California surf competitions.

At Cal Poly, Sullaway joined the Cal Poly Surf Team as a freshman and has watched it grow over the past four years. Once an unknown team, they now consistently rank among the top five in major collegiate competitions, even taking second place at nationals last year.

Sullaway has become one of the team’s senior members, competing hard and helping the newbies acclimate to competition culture. He and other upperclassmen also help the freshmen without cars get to the ocean.

He is graduating this year and knows he will miss the surf culture in SLO. “You can’t really beat our lifestyle that we have right here,” he said.

In the Shape Shop

Anna Talken doesn’t just ride on surfboards, she makes them. After taking up surfing in high school, she quickly fell in love with the sport.

At Cal Poly, she took a surfboard-shaping class through the ASI Craft Center. She designed a few more boards on her own in the studio, eventually joining the staff as a surfboard-shaping instructor. Now she teaches students to shape their own boards from start to finish in six weeks.

“I’ve gotten a lot of feedback from my students that they love their boards and they can’t wait to shape another one,” Talken said.

She has shaped 13 so far and doesn’t plan on stopping, often giving away her extra boards to friends. Her favorite board is a 7’2” egg-shaped mid-length board with ethereal planetary circles painted on its surface. “I ride it in every condition,” she said.

Anthony Randazzo has ridden both tides of success and failure in his professional career. Once a serial entrepreneur in the surfing world, Randazzo is now an adjunct industrial technology and packaging faculty member at Cal Poly. At the start of new quarters, Randazzo plays show-and-tell with his students, bringing in artifacts and curios of past business endeavors.

Randazzo grew up in Atascadero, riding the breaks of Morro Bay, even earning some corporate sponsorships along the way. After spending a few years surfing in Maui, he returned to California and attended Cal Poly, pursuing a master’s in industrial technology with a minor in packaging. Outside of class, he rode with the Cal Poly Surf Team and soon noticed that everyone’s board bags were falling apart.

Randazzo and a friend worked in the Cal Poly packaging labs and produced their first board bags. The idea grew like the swell of a wave. First came surfboard bags, then snowboard bags, then backpacks and apparel. Before long, the pair opened up a brick and mortar store, the San Luis Surf Co., in downtown SLO with affiliate branches in Morro Bay and Los Osos.

“I just remember how exciting it was the first day we opened up our shop,” Randazzo said. The 3,000 square foot SLO store sat in the heart of downtown and for the first year and a half, business boomed.

Like any wave, it was on a crash trajectory. When the economy collapsed in 2008, San Luis Surf Co. was forced to close its doors. “It was pretty emotional,” Randazzo said.

He now teaches industrial technology and packaging at Cal Poly, but he shares far more than just his academic knowledge with his students. “I think a lot of my students have appreciated that I share not only my successes but my failures too,” Randazzo said. “The main thing that I try and share with my students now is just do what you’re passionate about.”

When you think about surfing, cutting-edge technology probably isn’t the first term that comes to mind. A team of aerospace engineering grad students working at Cal Poly’s Center for Innovation and Entrepreneurship (CIE) are working to change that.

“The traditional surfer has evolved,” says Shaun Wixted, co-founder of Lost Coast Surf, a startup currently housed in the CIE Hatchery entrepreneurship program. “A surfer who goes out three or four times a week might also be an engineer or an executive who wants to optimize every part of their life — even surfing.”

Wixted and his partners, Brandon Baldovin and Tynan Guerra, all pursuing master’s degrees in aerospace engineering, are developing a smart surfboard designed to perform better than traditional surfboards, make better use of resources in the shaping process, and give users real-time data on their surf sessions. Think Fitbit or Strava for surfing — sensors embedded in the fin would send information like paddling rate, number and length of rides and position on the board to an app, which the user could analyze to improve performance or share with networked friends.

For the Lost Coast team, the project is an opportunity to marry two things they love: surfing and engineering. “We wanted to use the knowledge we have of fluid mechanics and apply that to something we’re passionate about,” said Wixted. “We’re trying to push the surfing industry into the future.”

Changing with the Tides

In the ever-changing spot where the ocean meets the land, biology grad student and teaching associate Kali Horn is examining how some of the toughest creatures on Earth survive in a highly-volatile habitat.

Every few weeks Horn, visits the tide pools near the Cal Poly Pier, the university’s marine research facility at Avila Beach, to collect data from temperature loggers glued inside the shells of mussels and barnacles. She’s hoping to discover new information about how these hardy organisms cope with the stresses of living in a constantly-changing environment.

But while she’s learning how animals in the intertidal zone adapt to shifting conditions — no small question in the face of a changing climate — she’s also discovering something about herself.

“I’ve done research in the past throughout my undergraduate career, but this is the biggest opportunity I’ve had to take the work into my own hands and run with it,” she said. “I’m learning how to be a better scientist.”

A Peek of the Peak 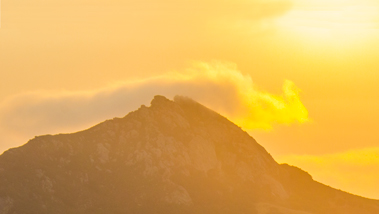