Slaves of One Master 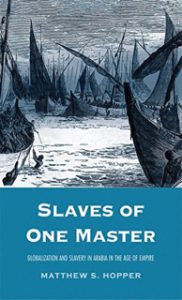 Matthew Hopper, an associate professor of history at Cal Poly, was one of three finalists for the 2016 Frederick Douglass Book Prize, given this spring by the Gilder Lehrman Center for the Study of Slavery, Resistance, and Abolition. His book, “Slaves of One Master: Globalization and Slavery in Arabia in the Age of Empire,” was published in August 2015 by Yale University Press.

“I was completely surprised and humbled to learn that the book had been selected as a finalist for the Frederick Douglass Book Prize,” says Hopper. “It’s the kind of thing you hope to accomplish by the end of your career, and since this is my first book I was definitely not expecting anything like this.”

In a deeply researched history, Hopper analyses slavery in Arabia in the nineteenth and twentieth centuries, particularly the connections among enslavement, globalization and empires. “Most of us today don’t think very much about the lives of the laborers who produce our food, clothes, or cell phones,” Hopper said. “Likewise, in the nineteenth century, most people who wore pearl necklaces from the Persian Gulf or consumed dates produced in Arabia did not think about the lives of the enslaved Africans who helped produce those things.”

In the book, Hopper challenges some of the previously held ideas about slavery in the Middle East and British imperialism. It is an impactful analysis that fills a gap in the literature on the subject.

By Dennis Elliot with Lisa Nauful