By Eric Burdick with Larry Peña

Jake Javier had a plan. Named Athlete of the Year for his entire school district, the 6-foot, 3-inch, 260-pound offensive lineman from San Ramon Valley High School in Danville, Calif., had been admitted to Cal Poly as a preferred walk-on and planned to major in mechanical engineering.

Then, the day before graduation, Javier fell from a friend’s hot tub into a pool and broke his neck, leaving him paralyzed from the chest down.

“Jake is a great young man, a quality guy,” said Mustang football head coach Tim Walsh. “We were looking forward to his arrival at Cal Poly, but now our thoughts and prayers are with him as we hope for his best possible recovery.” 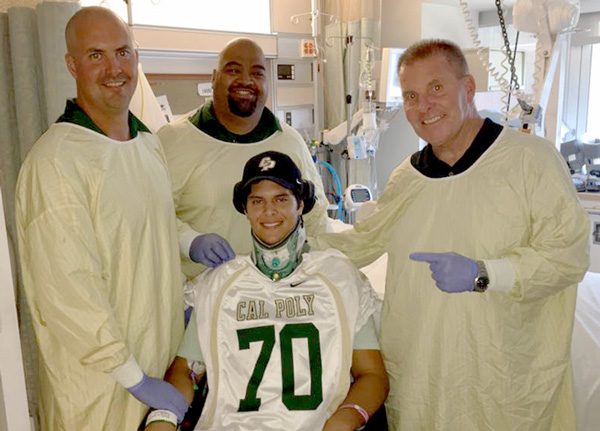 Over the summer, Javier’s home community has rallied to help support him and his family, hosting a fundraising gala to help cover his medical costs. A GoFundMe campaign has raised more than $214,000 toward his treatment. Additional funding is still needed, as Javier faces surgeries, experimental stem cell operations, and years of therapy to recover mobility in his upper torso.

Although his plans to play college football have changed, the Mustang Athletics team has had his back, helping spread the word about Javier’s recovery and fundraising campaign. Coach Walsh, along with special teams coordinator and wide receivers coach Jim Craft and former offensive coordinator Saga Tuitele, paid a visit to Javier at the hospital and presented him with an official Mustang game jersey.

“Jake was elated to see them and to receive the NCAA official jersey,” wrote Javier’s mother, Isabella. “The visit was filled with laughter, great advice and love. It was heartwarming to see the care displayed by the Cal Poly football staff.”

Cal Poly football players formed the letters of Javier’s nickname on the field at Spanos Stadium recently and have been wearing “Javier Strong” bracelets during practice.

“His desire to be a part of the Cal Poly football program is something we will pass along to the entire team,” said Walsh. “Jake’s attitude is what we want our Mustang athletes to have as well.”